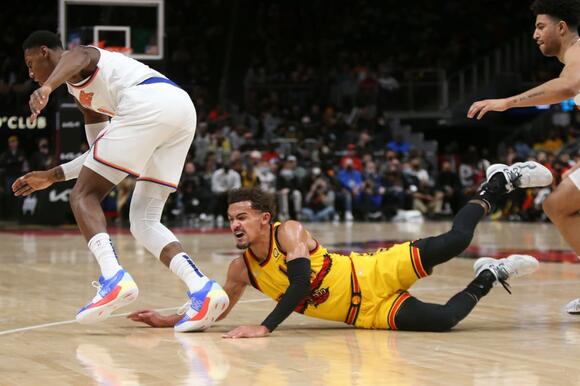 The Atlanta Hawks have now lost five straight games (and ten consecutive home games). Meanwhile, the New York Knicks have won three in a row and are starting to resemble the smashmouth team of last season. Whenever these two rivals play, there are plenty of highlights. It wasn't easy selecting the five best plays, but this is what we decided on.

Now I understand why the Hawks were trying to get Quentin Grimes as part of the Cam Reddish trade. The rookie continues to have some of his best games against the Hawks. Last night, Grimes scored 8 points (3-3 FG) and made big plays on defense. This young man has a bright future.

Trae Young sometimes gets too much criticism for his defense. Watch 'Ice Trae' get the steal and push the ball up to John Collins for the nasty fastbreak dunk. The Hawks need more of this on both sides of the ball.

The NBA's 2021 Most Improved Player continues to grow his game. Last night, the Knicks were without both Derrick Rose and Kemba Walker. So, Julius Randle took over the game and helped seal the deal with 24 points, 6 rebounds, and 9 assists.

I can't even lie; I didn't know Danilo Gallinari could still elevate like he did on this play. 'Gallo' has been involved in plenty of trade rumors in recent weeks, and he has demonstrated his ability to score at a high level during that time.

I don't care if the Knicks won the game; Onyeka Okongwu gets the play of this game with this monster block of Julius Randle. The second-year player has flashed moments of brilliance in his short career, and there is no doubt that he will play a significant role for the Hawks in the future.

The 19-year-old shooting guard has a high upside.
ATLANTA, GA・19 HOURS AGO
All Hawks

The All-NBA point guard opened up on Stacey King's podcast.
NBA・1 DAY AGO
All Hawks