Retirees have a lot of control over how much Social Security income they end up with. In fact, decisions seniors make about when to get their first check could cause their income to rise or fall dramatically.

Older Americans need to be aware of the impact their claiming choice could have on their monthly benefit so they don't end up regretting it. In particular, it's important to know that if you make this decision in 2022, your benefits could shrink by as much as 30%. 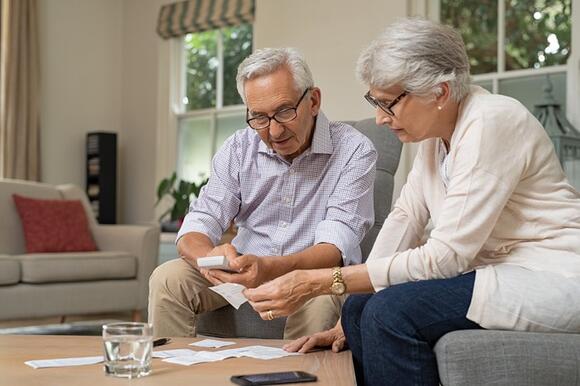 Will you end up slashing your monthly Social Security benefit?

If you decide to start your Social Security checks in 2022 , your decision could reduce your benefits by as much as 30%, depending on your age.

Why would simply starting benefits reduce your check by so much? It's simple. If you don't wait until your full retirement age (FRA) , you'll be subject to penalties that lower the amount of your standard benefit.

Retirees who are turning 62 in 2022 have a full retirement age of 67. That means if they want their standard benefit, they must wait five years before they get their first Social Security check -- even though they are eligible to claim it as soon as they've reached their 62nd birthday.

At 67, they'd get a benefit equaling a percentage of average wages in the 35 years when their earnings were highest. But at 62, that benefit would be reduced by 30% because they'd be hit with the maximum possible early-filing penalties.

Those who are older than 62 but younger than their full retirement age in 2022 would also suffer a loss in their benefits if they file for them this year, although it wouldn't be quite 30%.

What are early-filing penalties and why do they reduce your benefit so much?

Early-filing penalties clearly have financial consequences since they can leave some retirees with Social Security checks that are 30% smaller than the benefits they earned based on their work history. But what exactly are these penalties?

To understand, it's helpful to know that Social Security gives retirees a choice of when to claim benefits, allowing them to start their checks any time between ages 62 and 70. Of course, it wouldn't make sense for anyone to wait until 70 if they got the same benefits they would've received at 62. They'd be giving up years of income for no reason.

To make things fair for everyone while providing flexibility in when people retire, Social Security was designed with a system of early-filing penalties applicable before full retirement age. Because of these penalties, those who claim benefits at a younger age would get more checks but each would be smaller. Those who wait beyond FRA are also rewarded under the benefits formula with delayed retirement credits that raise their benefits.

Actuaries predict life expectancies, which were used to determine how big those penalties and credits should be so early claimers and late filers would theoretically get the same lifetime benefits whether they started at 62, 70, or any age in between. With this information about projected life expectancies, the Social Security devised a system in which:

Full retirement age has changed over time, but this system of early-filing penalties hasn't.

If this applies to you, it's important to know how much filing for benefits this year could shrink your monthly checks. Even if it's not the full 30%, a reduction can still be painful if you'll rely on Social Security as an important income source in your later years.

You might not receive Social Security checks yet. But changes to the federal program could still affect you.
WASHINGTON STATE・2 DAYS AGO
The Motley Fool

How Much Social Security Can Spouses and Ex-Spouses Get in 2023?

Hoping to cash in on spousal benefits? Here's what Social Security will pay in 2023.
2 DAYS AGO
The Motley Fool

Here's How to Squeeze an Extra 24% Out of Social Security

Generating income from your portfolio is a great way to fund your retirement. There are lots of options, each with varying degrees of risk. You’re reading a free article with opinions that may differ from The Motley Fool’s Premium Investing Services. Become a Motley Fool member today to get instant access to our top analyst recommendations, in-depth research, investing resources, and more. Learn More.
19 HOURS AGO
The Motley Fool

These 13 States Will Extend Emergency Food Benefit Payments Through December

Some states continue to pay out emergency SNAP benefits. Just 13 states have confirmed emergency benefits for December, compared to 35 in November. The emergency allotments mean households can receive the maximum amount for their size, and those already receiving the maximum receive an additional $95. It isn't clear how...
MAINE STATE・1 DAY AGO
The Motley Fool

A Recession Could Be Inevitable. Don't Panic -- Do This Instead.

All the signs are pointing to a recession, but there are actions investors can take now to weather the storm.
17 HOURS AGO
The Motley Fool

Aim to check all of these off your list.
1 DAY AGO
The Motley Fool

Stimulus Update: Are There Signs Another Stimulus Check Is on the Way?

Americans are eager to see more stimulus aid. Will they soon get their way?
16 HOURS AGO
The Motley Fool

You can own a piece of this terrific company for less than the cost of a fancy dinner out.
2 DAYS AGO
The Motley Fool

Many people don't realize there's an earnings test of sorts that can lead to higher monthly premiums for Part B medical coverage.
17 HOURS AGO
The Motley Fool

Stimulus checks made a much bigger difference than you'd think. Thousands of dollars in stimulus checks were provided during the COVID-19 pandemic. Many Americans were able to use the checks to improve their finances. Americans have been left with a shocking amount of extra money thanks to stimulus payments. During...
1 DAY AGO
The Motley Fool

Could you generate similar savings by making a few small changes?
12 HOURS AGO
The Motley Fool

You may want to make sure your move doesn't leave you with a lower monthly benefit.
CONNECTICUT STATE・19 HOURS AGO
The Motley Fool

61% of Americans Who Don't Own Stocks Say It Doesn't Pay to Invest if You Don't Have a Lot of Money. Here's Why They're Wrong

It pays to follow her advice.
18 HOURS AGO
The Motley Fool

Why Owning Real Estate in Retirement Is a Good Idea

Pad your retirement earnings with passive rental property.
2 DAYS AGO
The Motley Fool

Leave yourself wiggle room, just in case.
18 HOURS AGO
The Motley Fool

1 Super Stock With 113% Upside, According to Wall Street

Atlassian is bucking the tech sector slowdown in more ways than one.
15 HOURS AGO
The Motley Fool

Could Bitcoin Help You Retire Early?

While Bitcoin offers tremendous upside potential, it also comes with several major risks that limit its effectiveness for long-term retirement savings.
19 HOURS AGO