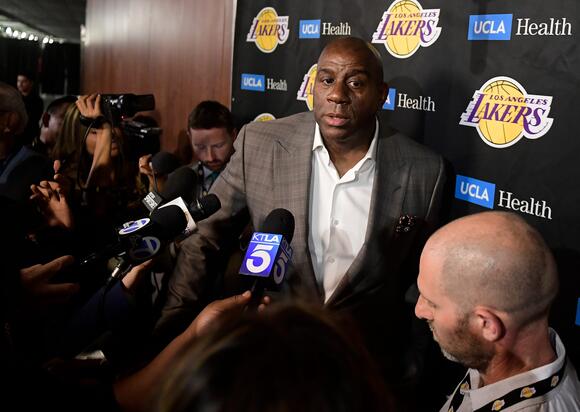 That makes Johnson's message to Los Angeles Lakers owner Jeanie Buss in the final sentence of his Saturday night tweet , which ridiculed the team's effort in a blowout loss to the Denver Nuggets, all the more intriguing.

"After being blown out by the Nuggets 133-96, we as @Lakers fans can accept being outplayed but we deserve more than a lack of effort and no sense of urgency," Johnson wrote. "Owner @JeanieBuss, you deserve better."

A NBA and Lakers legend, Johnson was the organization's general manager for two years and abruptly quit in April 2019, handing the reigns to Rob Pelinka; under Pelinka, the Lakers signed LeBron James and won the 2020 NBA Finals.

James did not address reporters following the game. It was the second-biggest defeat of his career, per ESPN. Russell Westbrook said he did not have a reaction to the tweet when asked about it. He elaborated, via ESPN :

"Everybody is entitled, in this world, to their opinion. Regardless of what that it is. You can either take it and run with it or you can take it and put it in one ear and out the other or you cannot respond to it.

'That’s what he gets paid to do': Celtics' Jayson Tatum turns in career-defining performance to beat Bucks in Game 6 | Opinion

In a game he's been building to for years, Jayson Tatum turned in a transcendent performance with Boston on the edge of elimination on the road.
BOSTON, MA・2 DAYS AGO
USA TODAY

The mother of Rajon Rondo's children filed for an emergency protective order May 13 after an allegedly "violent" incident at her Louisville home.
LOUISVILLE, KY・5 HOURS AGO
USA TODAY

From Celtics to Warriors, who are X-Factors in Eastern, Western Conference finals of NBA playoffs?

We know what to expect from stars Steph Curry, Jayson Tatum, Luka Doncic and Jimmy Butler in the next round. But which role players are key factors?
BOSTON, MA・15 HOURS AGO

The Boston Celtics have a terrific opportunity to win their first NBA championship since 2008 – and overtake the LA Lakers for the most titles.
BOSTON, MA・23 HOURS AGO