As a financial investment, the Rivian stake has generated a huge windfall for Ford. However, the strategic aspect of the investment has fallen apart, as the two companies no longer plan to collaborate on vehicle development. With Rivian stock trading at an extraordinarily high valuation for a glorified start-up -- even after a sharp pullback from its November peak -- Ford should look to sell its Rivian shares in 2022.

Before the pandemic, Ford planned to build a Lincoln-branded crossover on Rivian's platform, complementing the EVs it expected to develop fully in-house. It canceled that project in April 2020, but the companies said at the time that they would develop a different Ford vehicle on Rivian's platform. 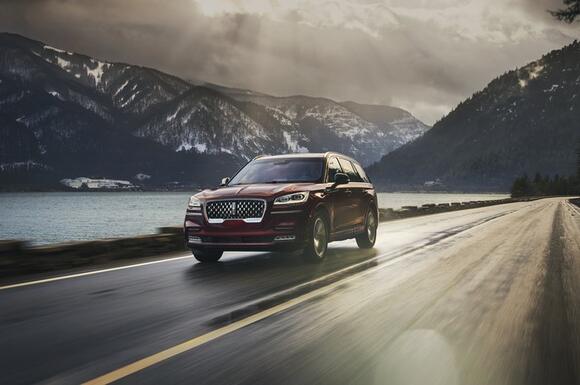 However, last November -- shortly after Rivian's initial public offering (IPO) -- Ford and Rivian acknowledged that they no longer had any plans to work together on vehicle development or platform sharing. The companies will instead focus on their separate EV product road maps. This shift removes the strategic aspect of Ford's investment in Rivian stock.

The case for cashing out

Following the cancellation of Ford's plans to collaborate with Rivian on an EV, CEO Jim Farley said Ford was still bullish about Rivian's future and wanted to maintain an investment in its budding rival. For now, it doesn't have a choice: Pre-IPO investors in Rivian stock are subject to a 180-day lock-up agreement that bars stock sales for several more months.

But when that lock-up period expires, Ford should seriously consider selling some or all of its roughly 102 million Rivian shares.

Rivian stock ended last week at $79.95, near its IPO price of $78 but down more than 50% from its mid-November peak. Despite that pullback, Rivian's valuation is not that much lower than that of Ford. 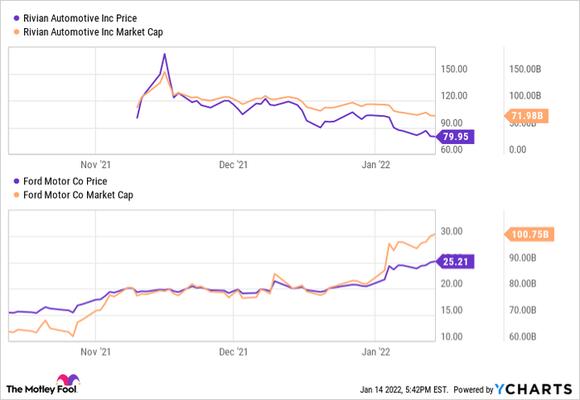 This doesn't make much sense. Rivian's only factory has an annual production capacity of 150,000 units, which the company is currently expanding to 200,000. Last month, Rivian selected a site in Georgia to build a second factory with an annual production capacity of 400,000 vehicles. However, it won't even start production there until 2024. Until both factories are operating near full capacity, Rivian is likely to burn cash year after year.

Looking further ahead, founder and CEO RJ Scaringe said Rivian aims to reach annual output of at least 1 million units by 2030. That isn't much scale by auto industry standards. Tough competition in the EV space will likely limit Rivian's free cash flow potential unless it can grow well beyond the 1 million vehicles per year level.

Ford should bet on itself

Whereas Rivian will take years to scale its production, Ford plans to have the capacity to build 600,000 EVs annually by the end of 2023. The in-demand Mustang Mach-E and F-150 Lightning will account for more than half of that output. Production will continue to grow from there.

In short, Ford is on track to build up a high-volume EV business much faster than Rivian. Meanwhile, the storied automaker 's legacy business continues to churn out cash, including an estimated $4 billion to $5 billion of adjusted free cash flow in 2021.

It's certainly possible that Rivian will grow into its $70 billion-plus market cap over the next decade (and far more plausible than when Rivian's market cap peaked above $150 billion two months ago). But it faces a tough slog between now and then, and there's no guarantee that it will be able to make big inroads in the pickup market, where brand loyalty remains extremely strong.

Today, Ford's 102 million shares of Rivian stock are worth over $8 billion. Cashing out would give the company a big cash infusion that it could use to accelerate its growth investments, fund restructuring efforts that would boost future profitability, or even just buy back some Ford stock. Ford has a solid foundation for future success in the EV market, and it should bet on its own future rather than holding Rivian stock as a long-term investment.

Could Rivian Become the Next Tesla?

Even though the stock is down, the company is following in the right footsteps.
ECONOMY・9 HOURS AGO
The Motley Fool

And why this could be a buying opportunity for long-term investors.
STOCKS・1 DAY AGO

Deere stock has come down in price, and there are some headwinds worth monitoring.
STOCKS・11 HOURS AGO
The Motley Fool

Snap's revised lowered guidance and warning took every digital advertising company down with it.
STOCKS・8 HOURS AGO
The Motley Fool

Why Palantir Stock Was a Winner on Wednesday

The company signed a new deal with an important client.
ECONOMY・1 HOUR AGO
The Motley Fool

Adding shares of these market leaders should pay off big when the dust settles.
STOCKS・11 HOURS AGO

Why Planet Labs Stock Went to the Moon Today

And why BlackSky and Maxar Technologies are both joining Planet up there.
AEROSPACE & DEFENSE・6 HOURS AGO
The Motley Fool

These stocks have all stood the test of time and most of them are also trading at attractive levels.
STOCKS・11 HOURS AGO
The Motley Fool

Why Carvana Stock Is Bouncing Back Today

A Carvana director purchased more shares of the company, which boosted investor sentiment today.
STOCKS・4 HOURS AGO
The Motley Fool

Looking for a Rock-Solid Passive Income Stream: Check Out This 5.6%-Yielding Dividend Stock

This dividend has the full faith and credit of the U.S. government backing it.
REAL ESTATE・1 DAY AGO
The Motley Fool

Sometimes, companies you've never heard of can take your portfolio to the next level.
STOCKS・7 HOURS AGO
The Motley Fool