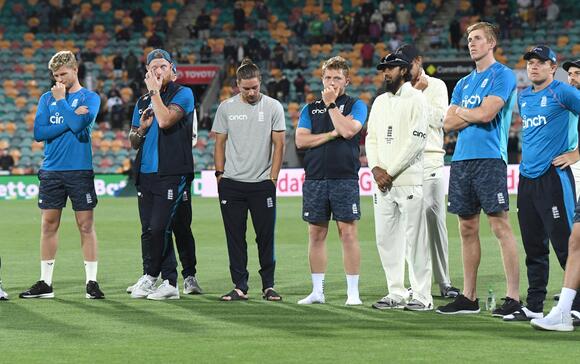 England’s abject Ashes campaign came to a fitting finale in Hobart with another dire batting collapse sending the tourists home with a thumping 4-0 defeat and tails between their legs.

They lost all 10 second-innings wickets for just 56 runs as they were bowled out for a paltry 124. That sealed a 146-run loss, the latest in a quartet of hammerings that are sure to give rise to an extended post mortem. 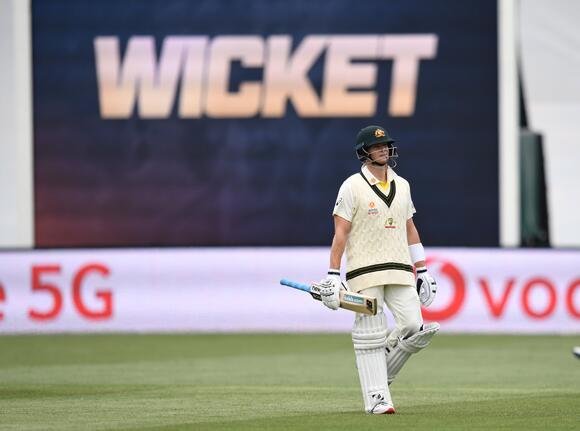 For the last two Ashes series England have had no answers to Steve Smith who averaged 137.40 four years ago Down Under and 110.57 on tour in 2019. This time they have kept him down to 30.50 with no century – the kind of numbers they would have killed for. Unfortunately for them, putting a lid on Smith has coincided with so many other areas of concern that results have been even more horrendous.

That was very tough viewing. That has to be our rock bottom, there cannot be a worse a place than getting bowled out in a hour and a half.

England finished fourth in the inaugural World Test Championship table, missing out on a chance to lift the maiden title on home soil last summer. They can probably start making alternative plans for the next final in 2023 already as a desperate run of results added to over-rate penalties leaves them a distant bottom. At least there is no relegation.

Kevin Pietersen has had a turbulent relationship with England over the years, but he also has 104 Tests, 8,181 runs and 23 centuries under his belt for the Three Lions. He has long been critical of the domestic system and was not about to let a chance to make his point slip through his fingers.

For the third time in the series England saw a wicket scrubbed from the scorebook due to a no-ball, with Alex Carey reprieved after Chris Woakes overstepped. The sequence of unforced errors began with Ben Stokes against David Warner in Brisbane and continued when Ollie Robinson repeated the mistake versus Marnus Labuschagne. England have some serious technical and structural matters to address when they get home, but getting their boots a centimetre or two behind the line should be a simple fix.

Rangers suffered penalty shootout heartache in Seville as Eintracht Frankfurt came from behind to win the Europa League.Joe Aribo put the Rangers fans in dreamland when he slotted home following a slip in the German side’s defence in the 57th minute.Frankfurt levelled 12 minutes later when Rafael Borre knocked the ball home from close range following a low cross.Gers finished extra-time strongly and Ryan Kent was denied at close range before Steven Davis had a shot cleared off the line, while James Tavernier had a free-kick saved in stoppage-time of the 1-1 draw.Aaron Ramsey, a 117th-minute substitute, saw his spot-kick saved and Borre netted to seal a 5-4 shootout win. Read More Live updates: PM ‘dithering’ on windfall tax, says StarmerBrexit has increased risk of danger foods reaching UK, watchdog warns
SPORTS・8 HOURS AGO
The Independent

The French Open begins on Sunday with Novak Djokovic and Barbora Krejcikova looking to defend the titles they won last year.Meanwhile, Rafael Nadal will be out to bounce back from his semi-final defeat by Djokovic 12 months ago and land Roland Garros crown number 14.Here, the PA news agency looks at five players to watch in Paris over the next fortnight.Carlos AlcarazTEEN TAKEOVER IN MADRID 🏆Carlos Alcaraz wins his second ATP Masters 1000 title 👏@alcarazcarlos03 | @MutuaMadridOpen | #MMOPEN pic.twitter.com/znQfSSg8bo— ATP Tour (@atptour) May 8, 2022Teenage Spanish sensation Alcaraz has been tipped by no less than Djokovic and Nadal as...
TENNIS・1 HOUR AGO
The Independent

A new “super nature reserve” is being created across 15,000 acres of the Somerset landscape to protect saltmarsh, heath and wetland habitats.Government conservation agency Natural England has announced a new Somerset Wetlands “super” National Nature Reserve (NNR) in an area home to rare and threatened species including skylark, bittern and avocet.The area in the Somerset Levels, Moors and coast is also a significant site for insects including the hairy dragonfly, silver diving beetle, and the UK’s second largest spider, the raft spider.And it is the second largest area of lowland peat in the UK, providing a significant carbon store.The move...
LIFESTYLE・7 HOURS AGO
The Independent

Can Djokovic defend title or will Nadal make it 14? – French Open talking points

The French Open begins on Sunday with Novak Djokovic and Barbora Krejcikova looking to defend the titles they won last year, while Rafael Nadal goes in search of a 14th Paris crown.Here, the PA news agency looks at the talking points ahead of Roland Garros fortnight.Old guard and young guns collideWith Nadal, fitness permitting, going for Roland Garros title number 14 and Djokovic, back from his Australian exile, aiming to tie his great rival on 21 grand slams, the men’s tournament is set up to be an absolute cracker. Throw in teenage sensation Carlos Alcaraz – who beat the gilded...
TENNIS・1 HOUR AGO

Crystal Palace manager Patrick Vieira has promised to seek talks with midfielder Cheikhou Kouyate over the reason behind his messages of support on social media to compatriot Idrissa Gueye.Gueye has come under fire after he failed to feature in Paris St Germain’s 4-0 win over Montpellier on Saturday, which was the weekend Ligue 1 had chosen for its clubs to show solidarity ahead of International Day Against Homophobia, Biphobia and Transphobia this week.The French side wore rainbow-coloured numbers to show their support for the LGBTQ+ community but Gueye was absent for “personal reasons” having also missed the corresponding fixture last year.Kouyate...
PREMIER LEAGUE・8 HOURS AGO
The Independent

Eddie Howe has revealed one of the hardest parts of being Newcastle manager is having to say goodbye to his children.The 44-year-old father of three has spent the last seven months combining his parental duties with the task of keeping the Magpies in the Premier League with the latter objective having been accomplished handsomely and to popular acclaim.Howe, who replaced Steve Bruce at the St James’ Park helm in November last year, has commuted between the north-east and his home in Dorset, where his wife Vicki and their three sons, aged 10, seven and three, have remained amid the search...
PREMIER LEAGUE・8 HOURS AGO
The Independent

More than 2,800 Platinum Jubilee beacons will be lit across the globe in honour of the Queen’s 70-year reign, organisers have revealed as the two-week countdown to the national celebrations begins.A network of flaming tributes will stretch throughout the UK, with beacons at historic sites including the Tower of London, Windsor Great Park, Hillsborough Castle, Lambeth Palace and the Queen’s estates of Sandringham and Balmoral.The first beacons on June 2 – the start of the extended Jubilee weekend – are due to be set ablaze thousands of miles away in Tonga and Samoa in the South Pacific, and the final...
WORLD・7 HOURS AGO
The Independent

Football fans caught with cocaine will be banned from attending matches for five years, under new government plans.In changes expected be rolled out during the next football season, those convicted of supplying or being in possession of class A drugs could also be forced to surrender their passports when their team is playing abroad.Warning of an “ugly violence” at some football games this season, which “has shocked all the leagues”, the goverment’s policing minister Kit Malthouse claimed that “more and more the police are finding class A drugs at the heart of that disorder”, adding: “We must act.”The new punishments...
SOCCER・7 HOURS AGO