This Is The Worst SNL Host Of All Time 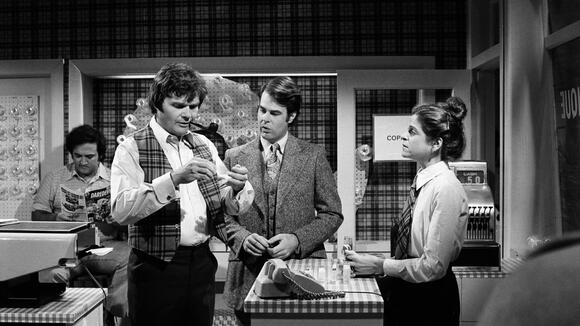 Saturday Night Live is among the longest-running shows in TV history. Started by Lorne Michaels, who remains the producer to this day, it has launched the careers for dozens of comics.

After the kick-off of its first installment in 1975, it quickly created stars that include Dan Aykroyd, John Belushi, Chevy Chase, and Gilda Radner. Cast member Eddie Murphy joined in 1980 and has become among the largest box office draws in American cinema. A few years later among the featured players were Mike Myers and Adam Sandler. Sandler went on to have another massive movie career as well.

SNL has also become a profit machine for NBC. By one estimate, it brings the network well in excess of $100 million a year .

Guest hosts have been comedians, singers, politicians, future presidents, sports figures, actors and reality-show stars. When a guest host clicks, it’s usually because he or she is able to poke fun at themselves, is on the same page with the comedy troupe, and enjoys the process of doing sketch comedy.

Sometimes a guest host doesn’t have the best comedy material to work with, and if they aren’t primarily a comedy performer, they don’t have the ability to save a sketch. But there have been cringeworthy guest hosts who have been their own worst enemy.

Business and future president Donald J. Trump appeared twice on “Saturday Night Live” and balked at sketches that poked fun at him.

Since its beginning, “Saturday Night Live” has taken chances with its programming, and picking the guest host has always been a part of what keeps the show relevant.

The worst host of SNL was Donald Trump. Here are the details:

Click here to read: The Worst SNL Hosts Of All Time.

Robin Roberts got emotional as she opened up about her relationship with partner Amber Laign, especially in the midst of a challenging health battle. The Good Morning America star made an appearance on The Ellen DeGeneres Show to promote her new book, Brighter By the Day. VIDEO: Robin Roberts enjoys...
CELEBRITIES・25 DAYS AGO
ComicBook

Netflix has canceled another one of its major shows, with this one getting the ax after only two seasons. Variety reports that hit sci-fi drama Raising Dion has been dropped by the streamer, following its recent season debut. The news seems to have been revealed by series star Sammi Haney, who shared the news with fans on Instagram. "Sad to say that Raising Dion is CANCELED [sic] Thank you for all of the amazing support we got from all of our wonderful fans!" Haney wrote, in part. "Season 2 was a success, equal to Season 1, even if just looking at how many people watched all of it and wanted a season 3!"
TV SERIES・24 DAYS AGO
Hello Magazine

One of the stars of This Is Us is on the move to a new network in advance of the show's series finale. Deadline reported in March that Chris Sullivan, who plays Toby on the NBC series, will headline a comedy pilot for ABC. His new show is set to be titled The Son In Law.
TV SERIES・24 DAYS AGO
Outsider.com

Geroge Wendt, who played Norm on the classic TV show Cheers, decided to be like Jack when he was in public. We mean Jack Nicholson here. The famed movie actor seemingly did not mind being noticed when out among the non-Hollywood crowd. Nicholson’s attitude about this did ring a bell for Wendt during his show’s incredible run on NBC and in reruns today.
CELEBRITIES・24 DAYS AGO
IndieWire

Click here to read the full article. Nearly 50 years after the original “Rocky” hit theaters, the classic boxing franchise keeps getting up off the mat. Ryan Coogler breathed new life into the series with 2015’s “Creed,” which followed Sylvester Stallone’s Rocky Balboa as he trained a young boxer named Adonis (Michael B. Jordan), the son of his late rival Apollo Creed. The film earned strong reviews for taking the franchise in a modern direction while maintaining what people loved about the original films, and sequels were quickly planned. When “Creed II” was released in 2018, it cemented Michael B. Jordan’s...
MOVIES・26 DAYS AGO
24/7 Wall St.

The Funniest American Movies of All Time

Hollywood has left America in stitches since silent films first flickered in the cinema screens more than 100 years ago. From slapstick to parody, from low brow to biting satire, movie mythmakers have created some of the most famous, and quotable, films of all time while leaving audiences laughing. Before talking pictures, the silent medium […]
MOVIES・2 DAYS AGO

The Most Popular Song Every Year Since 1970

Songs are the soundtrack of our lives. A song can evoke a romance that ended with wedding bells or a broken heart, or call to mind a high school summer or an entire era. If you heard The Weeknd’s “Blinding Lights” for what seemed like a million times last year, for instance — and it […]
MUSIC・1 DAY AGO