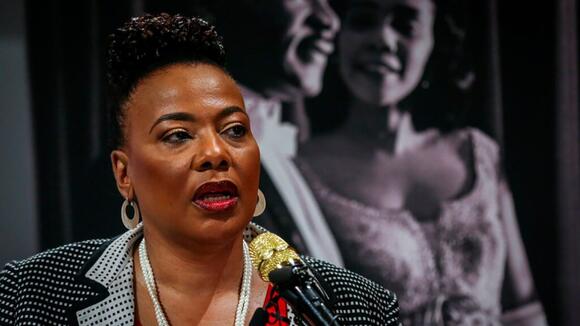 King tweeted a quote by her father that says: “I think the tragedy is that we have a Congress with a Senate that has a minority of misguided senators who will use the filibuster to keep the majority of people from even voting.”

She tagged McConnell, R-Ky., and Sinema, D-Ariz., at the end of the tweet.

Democrats have been trying to push forward voting rights legislation that Senate Republicans have been stalling through a filibuster , a procedure that allows Senators to delay and block bills. Democrats currently need 60 votes to override the filibuster. There are only 48 Democrats in the Senate. Maine Senator Angus King and Vermont Senator Bernie Sanders are independents who caucus with Democrats to bring their total to 50.

President Joe Biden and Senate Majority Leader Chuck Schumer, D-NY, hoped that changing filibuster rules would get the voting bills passed , but the idea doesn’t have support from the entire party.

Sinema, as well as Sen. Joe Manchin , D-W.Va., have been particularly vocal against their party’s majority wishes. On Thursday, Sinema made a speech on the Senate floor to announce she still wants to keep the filibuster as it is. Manchin released a written statement reiterating his stance as well.

Republicans have been pleased by their position, with McConnell saying: “It was extraordinarily important and [Sinema] has, as a conspicuous act of political courage, saved the Senate as an institution.”

The legislation would also restore the ability of the Justice Department to police election laws in states with a history of discrimination, the Associated Press reports.

Schumer originally wanted to debate the voting rights legislation by Monday, which is Martin Luther King Jr. Day, but has since delayed the debate to Tuesday.

Someone please explain to me just how requiring a valid ID to vote restricts a person's right to vote and how it affects one race disportionally over another.

Officials push for pandemic funding ahead of possible COVID surge

Health officials warn the country could face a wave of COVID infections in the fall, and with federal COVID funds running out, there's concern tests, treatments and vaccines could all run out too.
PUBLIC HEALTH・10 HOURS AGO
Business Insider

In the hours after the riot, McConnell spoke briefly about his intentions to quash Trump's influence within the GOP.
CONGRESS & COURTS・21 DAYS AGO
WashingtonExaminer

Senator Lindsey Graham has said he was wrong to describe Joe Biden as 'the best person' to lead the country after the January 6 insurrection. Graham was recorded speaking to New York Times reporter Jonathan Martin on the day of the riot itself. Martin has written a new book with...
PRESIDENTIAL ELECTION・4 DAYS AGO

When President Joe Biden named Kamala Harris as his running mate, he promised his former campaign rival would be one of the most influential voices in the White House.
PRESIDENTIAL ELECTION・21 DAYS AGO
Fox News

EXCLUSIVE: A group of Republican senators is introducing legislation to block the Biden administration from sending personnel and funding from the Department of Veterans Affairs (VA) to alleviate the crisis at the southern border. The senators are alarmed by the Biden administration's announced termination of Title 42 on May 23,...
CONGRESS & COURTS・20 DAYS AGO
The Independent

A legal effort to ban Marjorie Taylor Greene from standing for re-election has been given the go-ahead by a federal judge, who denied the far-right Georgia congresswoman’s attempt to have the case against her thrown out – paving the way for further proceedings by the end of this week.The news led Ms Taylor Greene to complain that “I have to go to court on Friday and actually be questioned about something I’ve never been charged with and something I was completely against.”Ms Greene, a hardline pro-Trump Republican who has long circulated false conspiracy theories, is accused by campaigners of...
CONGRESS & COURTS・27 DAYS AGO
BIN: Black Information Network

A federal judge cleared the legal path for Georgia voters to stop Greene from being able to run for re-election. The Georgia rep was stripped of her committee assignments over racist comments she made online.
GEORGIA STATE・26 DAYS AGO

Rep. Marjorie Taylor Greene (R-GA) speaks to supporters of former U.S. President Donald Trump at the Banks County Dragway on March 26, 2022 in Commerce, Georgia. This event is a part of Trump's Save America Tour around the United States. (Megan Varner/Getty Images) On Monday, CNN's Andrew Kaczynski and Em...
COMMERCE, GA・20 DAYS AGO
Newsweek

Individual judges may not like the policy choices of the Biden administration, but it is not their job to weigh in on that policy debate.
TEXAS STATE・21 DAYS AGO
BuzzFeed News

Thomas Webster’s trial kicked off with dueling videos from the Capitol and competing theories of what they showed.
LAW ENFORCEMENT・20 DAYS AGO
The Atlantic

Last Monday, Malcolm Nance, an MSNBC talking head and former sailor in the United States Navy, showed up on the channel by satellite from Ukraine, dressed to kill. He wielded an assault rifle and wore full-camo military dress, including a ballistic helmet, and U.S. and Ukrainian flag patches. About a month ago, he said, he decided he was “done talking.” He then talked about how he had joined Ukraine’s international legion to help the country “fight [against Russia’s] war of extermination—an existential war.” Others have traced a similar journey. Andy Milburn, a journalist and ex-Marine who stopped writing and began training Ukrainians for combat, wrote an article about how he, too, was finished writing articles about Ukraine. “It just started to seem so frivolous,” he wrote, solemnly. “I didn’t want to be an observer.”
MILITARY・21 DAYS AGO