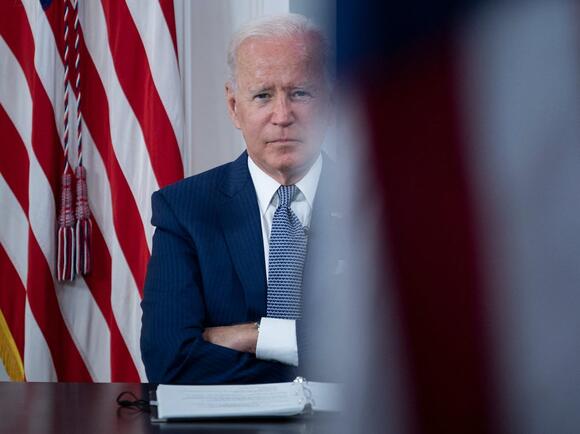 President Joe Biden has grappled for months with soaring inflation under his watch. And as 2022 kicks off, it hasn't fallen as quickly as the administration hoped.

White House officials long contended that the spike in consumer prices would be short-lived as the economy rebounded last year, but it hasn't played out like that. A federal report issued Wednesday showed prices rose a still-elevated 7% in December compared to a year ago, the fastest pace in nearly four decades.

Supply chains are still broken with consumer demand surging for all types of goods like used cars and groceries. The Biden administration is pinning the blame for rising prices on corporations like meat processors for profiting off the pandemic. But many economists, including one that served in the Obama administration, aren't buying it.

"Corporate greed is a bad theory of inflation," Jason Furman, a former top economist for President Barack Obama, said in an interview, adding, "I think almost everything other than the Federal Reserve is a sideshow when it comes to the dynamics of inflation."

Furman noted that demand outstripping supply is a far more important driver of inflation. "The main reason prices go up is companies are trying to make as much as they can, they just can't make enough to satisfy everything that people want," Furman, now a Harvard University professor, said. "When that happens, prices go up. If they didn't go up, we'd have worse shortages right now."

Republicans are hammering Biden for rising prices, which poses a fresh political obstacle as Democrats try to safeguard their narrow Congressional majorities in this year's midterms. A Quinnipiac Poll University poll released Wednesday found that 54% of Americans believe the economy is getting worse.

"This crushing report shows Democrats' spending has pushed Bidenflation to achieve the highest prices in 40 years, killing family budgets and wiping out three years of wage gains," Rep. Kevin Brady, the top Republican on the tax-writing House Ways and Means panel, said in a Wednesday statement after the latest inflation data.

The GOP has blamed the $1.9 trillion stimulus law for stoking inflation. Research from the Federal Reserve Bank in San Francisco published in October suggested its effects would be modest and brief. Other indicators like a falling unemployment rate and rising wages reflect an economy that's rebounding.

The White House and many Democrats on Capitol Hill have touted the $2 trillion Build Back Better plan as a key measure to hold down everyday costs for Americans, including establishing new prescription drug price controls and new childcare subsidies.

But Sen. Joe Manchin of West Virginia put a dagger into the package last month. Without him, Democrats can't muscle the plan through over unanimous GOP opposition in the 50-50 Senate.

Manchin has signaled he won't revisit his position in the near future and has often cited inflation as a reason to pump the brakes on the social and climate spending bill. "Inflation is a concern for every American, especially in West Virginia," Manchin told Insider on Wednesday. "It's hitting us very hard."

Furman pushed back against Manchin's argument. "I think inflation is a bad reason to not want to pass Build back Better," Furman said. "It's mostly paid for. It's a medium and long-term agenda and would have a negligible impact on inflation."

I think it's funny how people still believe this administration has gotten families out of poverty when in reality they made it way worse for poorer families. wait until tax time when families were getting way more back and now won't get almost nothing back spending all the other money thinking they were getting more. how about a low inflation rate of almost 8% when it's actually probably higher.

Biden's keeper need to get their facts straight. The corporations did not raise prices and cause inflation for profit motives. Biden caused inflated gas prices, supply chain problems, and all kinds of other problems that the Biden administration created and then tried to blame it on corporate America. Yeah Biden's staff are like elementary school students.

Did all you Biden supporters and tRump haters read that? Biden has erased at least 3 years worth of wage gains too. He really is trying to undo everything tRump accomplished.

"We're in a much different part in the world right now with the turmoil that we have," he told Insider. It's a new obstacle for Biden's spending plan.
FOREIGN POLICY・1 DAY AGO
Fortune

Sign up for the Fortune Features email list so you don’t miss our biggest features, exclusive interviews, and investigations. U.S. tariffs on Chinese imports survived a change in administration, but the trade-war-era levies may not survive record inflation. “We’re certainly looking at where we see costs being raised and,...
PRESIDENTIAL ELECTION・23 DAYS AGO
Business Insider

In West Virginia, people would see an average premium hike of $1,536 per person if ACA subsidies aren't extended, according to a Families USA report.
CONGRESS & COURTS・2 DAYS AGO

A majority of young Americans without student debt support Biden canceling it for everyone else, new poll finds

Members of Congress are generally limited in earning outside income. But there's a major exception.
CONGRESS & COURTS・2 DAYS AGO

In the latest set of text messages between the Fox News host and Trump's former chief of staff, Meadows told Hannity to "Stress every vote matters."
PRESIDENTIAL ELECTION・23 DAYS AGO
Fox News

A new Republican-backed law in Florida will repeal Disney’s special tax status, resulting in a property tax increase of up to 25% for residents of Orange County. MSNBC’s Lawrence O’Donnell explains how the move comes as GOP retribution for Disney’s opposition to Florida’s “Don’t Say Gay” bill.April 26, 2022.
FLORIDA STATE・23 DAYS AGO

EXCLUSIVE: A group of Republican senators is introducing legislation to block the Biden administration from sending personnel and funding from the Department of Veterans Affairs (VA) to alleviate the crisis at the southern border. The senators are alarmed by the Biden administration's announced termination of Title 42 on May 23,...
CONGRESS & COURTS・22 DAYS AGO
Business Insider

The intelligence the U.S. shared with Ukraine helped it continue to resist Russian invading forces and even shoot down a transport plane carrying hundreds of Russian troops, a new report revealed. According to current and former U.S. officials who spoke with NBC News on Tuesday, the U.S. provided critical intelligence...
MILITARY・22 DAYS AGO
Salon

Rep. Marjorie Taylor Greene (R-GA) speaks to supporters of former U.S. President Donald Trump at the Banks County Dragway on March 26, 2022 in Commerce, Georgia. This event is a part of Trump's Save America Tour around the United States. (Megan Varner/Getty Images) On Monday, CNN's Andrew Kaczynski and Em...
COMMERCE, GA・22 DAYS AGO

Harvard polled Americans under 30 who are likely to vote in the midterms and found 85% of them want some government action on student loan debt.
PRESIDENTIAL ELECTION・23 DAYS AGO
Business Insider

International order will be thrown out the window if Russia is able to escape consequences over its invasion of Ukraine, US Gen. Mark Milley told CNN.
POLITICS・22 DAYS AGO
Newsweek

The former president referenced scoring well on a cognitive test in 2018, which is designed to detect whether a person has early stages of dementia.
DELAWARE COUNTY, OH・24 DAYS AGO