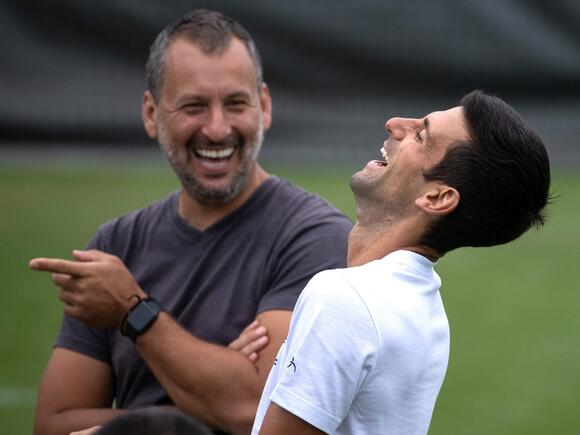 When Novak Djokovic found himself stuck in an immigration detention center for four days after having his visa cancelled upon entry to Australia, I had a certain level of sympathy for the world number one.

Yes, he chose not to get vaccinated against COVID-19, and yes, the situation was ultimately of his own making. But seeing him persecuted for what was essentially an extension of his own beliefs on inoculation wasn't easy.

Any such sympathy I did have, however, vanished in the subsequent days.

As the saga of his deportation rumbled on this week, the Serbian admitted Wednesday that not only had he attended a media event in Belgrade last month just days after testing positive for COVID, but that he'd also provided false information on his travel declaration form when entering Australia.

Djokovic made his mistakes worse with a mealy-mouthed apology. In a note posted on Instagram, Djokovic called attending the media event an "error of judgement," then promptly blamed someone else for failing to declare that he had travelled between Serbia and Spain before reaching Australia.

"My agent sincerely apologizes for the administrative mistake in ticking the incorrect box about my previous travel before coming to Australia," he wrote.

"This was a human error and certainly not deliberate. We are living in challenging times in a global pandemic and sometimes these mistakes can occur."

Both Djokovic's actions and his statement showed just how much he prioritizes his own success and his desire to win at all costs.

Djokovic is entitled not to be vaccinated. That is his choice, and whether you agree or disagree with it, it should be respected.

What he is not entitled to do, however, is put the health of others at risk by attending a public event while knowingly infected with a virus that has claimed the lives of millions of people across the world.

"I felt obliged to go ahead and conduct the L'Equipe interview as I didn't want to let the journalist down," he said.

"This was an error of judgement and I accept that I should have rescheduled this commitment," he said.

What he really means is he is sorry he got caught in his own web of dishonesty, or, in the words of an Australian TV anchor: "Fell over his own fucking lies."

He wasn't sorry at the time, in-fact he was smiling in photos taken on the day, in which he did not wear a mask.

As for providing false information about his movements, that is a kick in the face to people all across the globe, not least in Australia, who have sacrificed their own happiness over the last two years for the greater good.

By failing to mention his trip to Spain over New Year on his visa application, Djokovic essentially presented himself as above the rules and his presence in Australia was more important than the wellbeing of those who reside in the country and his fellow players.

Ultimately, Djokovic's actions have been punished. On Sunday after an appeal over the cancellation of his visa, Djokovic was deported from Australia. He will not defend his Australian Open crown.

Djokovic was, until recently, the pantomime villain of the tennis world. The one people loved to hate but were ultimately glad was still on stage because of the sheer entertainment he would provide. After all, he has won the Australian Open a record nine times.

This week, however, the Serbian revealed a different side to himself, one that saw him put his own success over the safety of others, and one that will be hard to forget.

He’s always been my favorite tennis player… possibly the best EVER. How sad that his character doesn’t match the greatness of his skill.

Every Country has RULES. Next is The French Open, Wimbledon and The USA Open ... I believe the French don't care about your status. So he won't have no problem with that country. Once again ... NO VAK 💉NO NO PLAY 🎾

He is a HERO they used him for their OWN POLITICS and against the AUSTRALIAN PEOPLE who REFUSE to get Vaccinated ! DIRTY COUNTRY! 😡🎾 GOD BLESS DJ AMEN 🙏

Albanese sworn in as PM in Australia ahead of Tokyo summit

CANBERRA, Australia (AP) — Australia’s new prime minister was sworn in Monday ahead of a Tokyo summit with President Joe Biden while vote counting continued to determine whether he will control a majority in a Parliament that is demanding tougher action on climate change. Prime Minister Anthony Albanese’s...
POLITICS・1 HOUR AGO
Reuters

SYDNEY (Reuters) - Australia’s new Prime Minister Anthony Albanese on Monday said the country’s relationship with China would remain “a difficult one”, before leaving for a Quad summit in Japan with U.S. President Joe Biden and leaders of Japan and India. “It is China that has...
INDIA・1 HOUR AGO
AFP