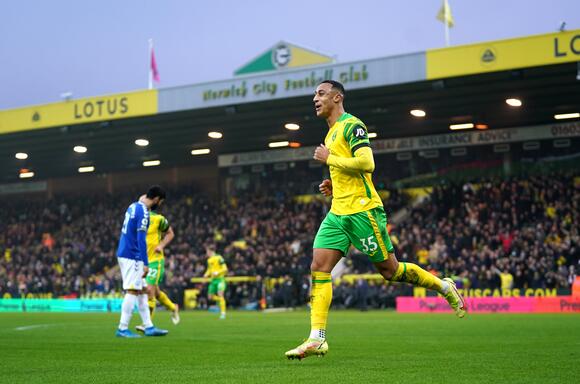 Adam Idah claimed Norwich are “really confident as a club” after their 2-1 victory over Everton lifted them off the foot of the Premier League table.

Norwich struck twice in quick succession as an own goal from Michael Keane and a poke home by Idah put the home side on course for a coveted victory.

Richarlison pulled one back for the visitors shortly after coming on with a perfectly-timed overhead bicycle kick but it was not enough for the Toffees to get something out of the game.

Idah told the club website: “We’re really confident as a club. We believe that we’re good enough to stay in this league.

“Everyone played their part today. Whether it was the attackers or defenders, we all did well and we grinded out the result.

“That’s what we needed in a game like today. We need to build on this now and go from here.

Everton travelled to Carrow Road without a league win since the start of December and defeat against a Norwich team which had been on a six-match losing streak without scoring a single goal will not have eased tensions between the fans and boss Rafael Benitez.

Supporters expressed their disappointment with the board and manager throughout the match and a pitch invader even attempted to reach Benitez before being caught by stewards.

Everton have now lost nine of their last 13 league matches and Benitez knows they cannot continue to make the same mistakes.

“We didn’t start the game bad in terms of control but after, we made the same mistakes and we made a couple of mistakes in a few minutes and we conceded two goals,” the Spaniard said.

“That is a difficult thing to change in the second half, but we bring onsome players and then the team was much better, we were more dominant, controlled and we had some chances but no clear chances because they were defending with a lot of bodies.

“It’s much better with players coming back. It always makes a team stronger.

“But we cannot change this situation now, we have to learn because we cannot make these mistakes in the future.”

Burnley have completed the signing of striker Michael Obafemi on loan from Swansea with an option to make the move permanent in the summer.The 22-year-old has scored 15 goals in 52 appearances for the Swans since joining from Southampton 18 months ago, and should boost Burnley’s promotion charge as Vincent Kompany’s side sit top of the Sky Bet Championship.Burnley have been linked with the Republic of Ireland international for several months and finally have their man – announcing the move a day after Kompany all but confirmed it was done in his post-match press conference following their goalless draw at...
2 HOURS AGO
The Independent

Paul Warne accepts Derby fans might not have been “dancing a jig” when he was appointed as their new manager earlier this season.Warne joined from Sky Bet Championship side Rotherham in September and was given the task of rebuilding the Rams after they nearly went out of business under their previous owner.The 49-year-old says the Derby fanbase were perhaps hoping for a “sexier name” to replace Liam Rosenior having previously had the likes of Wayne Rooney and Frank Lampard in their dugout.72 hours until we welcome West Ham to Pride Park Stadium in the @EmiratesFACup! 🏆🏡#DCFC #dcfcfans— Derby County (@dcfcofficial)...
5 HOURS AGO
The Independent

When is the FA Cup fifth round draw?

The FA Cup continued this weekend with the fourth round of the competition. The third round saw nine Premier League teams eliminated, with Aston Villa’s home defeat to Stevenage among the big upsets.The action began on Friday night with Premier League leaders Arsenal narrowly losing 1-0 to title rivals Manchester City in a heavyweight clash.National League leaders Wrexham - who are owned by Hollywood duo Ryan Reynolds and Rob McElhenney - are the only non-league side left.They face Sheffield United at the Racecourse Ground on Sunday, but Accrington Stanley couldn’t quite cause an upset when they faced Leeds United...
3 HOURS AGO
The Independent

Erik ten Hag said it was a pity he had to cost Marcus Rashford the chance to set a record by substituting the in-form forward in Manchester United’s 3-1 win over Reading.No player has scored in 10 consecutive appearances for United at Old Trafford and Rashford, who was tied with the Busby Babe Dennis Viollet, had struck in each of his previous nine games. He then had a first-half goal disallowed against Paul Ince’s side, was taken off midway through the second half.But Ten Hag cited United’s packed calendar, with his side set to play nine more games by...
5 HOURS AGO
The Independent

Tottenham assistant coach Cristian Stellini played down an injury concern for Richarlison after the Brazilian missed Saturday’s 3-0 FA Cup win at Preston.Richarlison has been limited to only three substitute appearances since the World Cup having been struggling with a hamstring problem.He was expected to come into contention for a start at Deepdale with Harry Kane recovering from an illness, but was not in the matchday squad, and Stellini later revealed Richarlison was missing with an adductor problem.However, the Italian said the injury was not serious and Richarlison should be back in training next week as Spurs prepare for the...
4 HOURS AGO