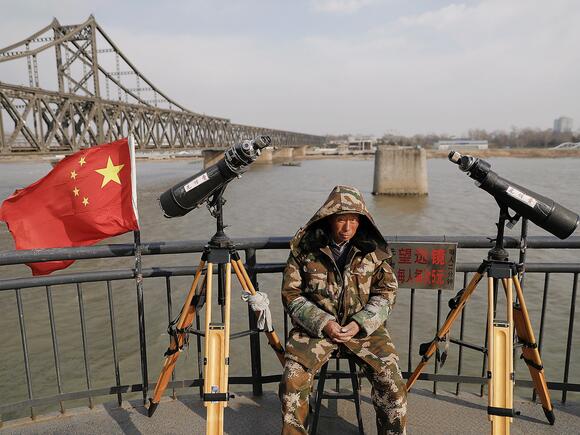 A North Korean cargo train pulled into the Chinese border town of Dandong on Sunday, the local media reported.

This is the first time North Korea has relaxed its border restrictions since it imposed strict lockdown during the start of the pandemic in 2020.

Meanwhile, after reports of the North Korean train crossing, Chinese brokers said they expected the resumption of regular trade with North Korea as soon as on Monday.

One unidentified Chinese commodities trader was quoted as saying by Reuters : “My business partner in North Korea told me on Friday that the land border will reopen to cargo freight on 17 January.”

He added: “By Saturday the whole import-export community here has heard about this and people have begun snapping up carriages to move their cargo over.”

It was reported that the cargo train shall return to North Korea on Monday. It remained unclear what the train was carrying.

North Korea has maintained that the country has zero Covid-19 cases but the international community disputes this claim.

North Korea imposed strict restrictions at the beginning of the coronavirus pandemic and closed all borders and imposed even domestic travel curbs.

Meanwhile, another unidentified Chinese trader in Dandong told Reuters that she can arrange for cargo to be loaded onto a train in Dandong which is scheduled to cross over to North Korea on Monday.

China has, so far not announced the opening of the border with North Korea officially.

A top US official in the Pacific has warned that America would have to “respond” if the Solomon Islands allows China to establish a military base there.Following a “constructive and candid” 90-minute meeting with prime minister Manasseh Sogavare, ambassador Daniel Kritenbrink said that the security deals between China and the Solomon Islands present “potential regional security implications” for the US and other allies.“We wanted to outline for our friends in the Solomons what our concerns are,” Mr Kritenbrink, US assistant secretary for East Asian and Pacific Affairs, told reporters.“We have respect for the Solomon Islands’ sovereignty. But we also...
FOREIGN POLICY・26 DAYS AGO
The Independent

Vladimir Putin is so popular in Russia that he has the “political space” to withdraw his forces from Ukraine, said Boris Johnson.The prime minister said the Russian president still has “massive backing” from his own people despite international outrage over the invasion.“The Russian public overwhelming back Putin,” Mr Johnson told Talk TV. “Therefore he has the political margin for manoeuvre from within Russia … Putin has far more political space to back down, to withdraw.”The PM added: “There could come a point when he could say to the Russian people, ‘The military-technical operation that we launched in Ukraine has...
POLITICS・25 DAYS AGO
Daily Mail

This is the surreal moment 21 migrants were found concealed inside two wooden crates during a traffic stop in Texas. The shocking findings took place April 6 when state troopers and U.S. Border Patrol agents pulled over a pickup truck and disrupted the human smuggling attempt in Laredo. Footage released...
LAW ENFORCEMENT・26 DAYS AGO
Fortune

Sign up for the Fortune Features email list so you don’t miss our biggest features, exclusive interviews, and investigations. Two Russian oligarchs found dead alongside their families within 48 hours of each other are the latest high-profile executives to die in mysterious circumstances since the beginning of the year.
PUBLIC SAFETY・27 DAYS AGO

Silk Road founder Ross Ulbricht is forfeiting billions of dollars worth of Bitcoin (BTC) and other crypto assets to the US government. According to a new court filing, Ulbricht will relinquish any claim to over 69,000 BTC and undisclosed amounts of Bitcoin Gold (BTG), Bitcoin SV (BSV) and Bitcoin Cash (BCH) worth a combined $3 billion as part of a settlement.
PUBLIC SAFETY・27 DAYS AGO
americanmilitarynews.com

The intelligence the U.S. shared with Ukraine helped it continue to resist Russian invading forces and even shoot down a transport plane carrying hundreds of Russian troops, a new report revealed. According to current and former U.S. officials who spoke with NBC News on Tuesday, the U.S. provided critical intelligence...
MILITARY・26 DAYS AGO
CNN

"No one wants to see the outbreak of a third world war," Chinese Foreign Ministry spokesman Wang Wenbin told reporters during a briefing.
CHINA・26 DAYS AGO

One man has been arrested after the bear was trapped under the wheel of a tractor and tied to an earth mover.
PUBLIC SAFETY・26 DAYS AGO
Salon

A plethora of downright bizarre scientific research from the Department of Defense previously kept under wraps has been uncovered, revealing an array of peculiar schemes proposed by the United States military. One outlandish proposal suggested detonating nuclear bombs on the moon to create a tunnel through it. Millions in taxpayer dollars were spent on the research, which appears to have relied on a contractor, Bigelow Aerospace Advanced Studies, which was owned by multi-millionaire Robert Bigelow, a hotel impresario. The public was kept in the dark until now regarding what research was being funded.
ASTRONOMY・25 DAYS AGO
Business Insider

A member of a superyacht crew also told The Times of London that one owner had his bar stools made from whale foreskin.
BOATS & WATERCRAFTS・28 DAYS AGO
Fortune

Sign up for the Fortune Features email list so you don’t miss our biggest features, exclusive interviews, and investigations. Shanghai’s 25 million residents have endured an extreme COVID lockdown for nearly a month—and now a new nightmarish topic is trending on Weibo, the country’s Twitter-like social media platform.
PUBLIC HEALTH・27 DAYS AGO
Business Insider

The Kremlin has refused to acknowledge its death toll in Ukraine, though a spokesperson admitted that Russia suffered "significant losses."
MILITARY・27 DAYS AGO
Business Insider

International order will be thrown out the window if Russia is able to escape consequences over its invasion of Ukraine, US Gen. Mark Milley told CNN.
POLITICS・26 DAYS AGO
Markets Insider

Indonesia accounts for about half of the world's supply of palm oil — the world's most widely used vegetable oil.
INDUSTRY・27 DAYS AGO
The Independent

Scientists have raised alarm over an invasive and aggressive species of worms that are native to Asia and can jump a foot off the ground after they were spotted on the west coast of the United States.The Asian jumping worm, also known as crazy snake worms, Alabama jumpers and Jersey wrigglers is a type of earthworm native to Japan and the Korean Peninsula, which arrived in North America with imported plants.The Amynthas agrestis was first spotted in the US in 2013 in Wisconsin and later across the New England region. In California, these worms were first seen in July 2021...
CALIFORNIA STATE・2 DAYS AGO