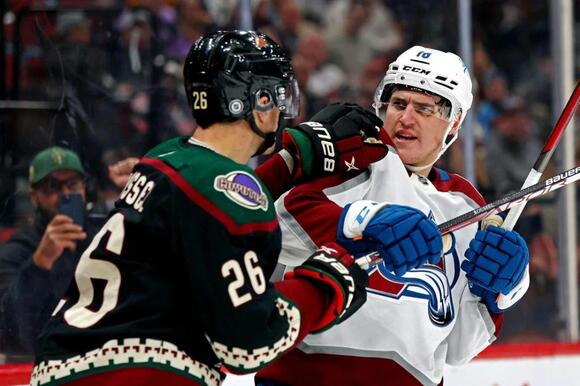 Mikko Rantanen and Nathan MacKinnon each had two goals and an assist for the visiting Colorado Avalanche in a 5-0 win against the Arizona Coyotes on Saturday.

Darcy Kuemper recorded his first shutout of the season with 20 saves for the Avalanche, who are 7-0-1 in their past eight games and 11-1-1 in their past 13. Colorado defeated Arizona 4-3 in a shootout on Friday.

Karel Vejmelka made 27 saves for the Coyotes, who are 2-3-2 in their past seven games.

MacKinnon opened the scoring on the power play at 13:13 of the first period.

Just seconds after the first penalty on a 5-on-3 man advantage expired, MacKinnon walked in from the left wall to the front of the net and lifted a backhander over Vejmelka for a 1-0 Avalanche lead.

Rantanen doubled the lead at 10:49 of the second period.

MacKinnon’s shot from the high slot off the rush squeaked through Vejmelka and Rantanen poked home the loose puck from the right side of the net to make it 2-0.

Andre Burakovsky intercepted Coyotes defenseman Ilya Lyubushkin’s clearing attempt and quickly dished off to Kadri in the slot, who skated to the front of the net before sweeping the puck into the open left side of the cage at 12:11.

After poking the puck away from Coyotes forward Clayton Keller in the Avalanche end, Rantanen took off on a 2-on-1 with Valeri Nichushkin and fired from the left circle for his second of the night.

MacKinnon cashed in on a Coyotes turnover and scored high glove from the left circle with 21 seconds left in the third period to make it 5-0.

The Tampa Bay Lightning can return to the Eastern Conference Finals for a third straight season with a victory against
TAMPA, FL・9 HOURS AGO
Sportsnaut

The St. Louis Blues and Colorado Avalanche will have to work through major injury concerns as their second-round Western Conference
SAINT LOUIS, MO・18 HOURS AGO