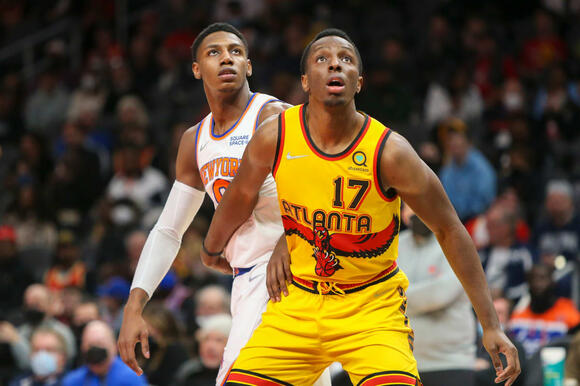 Earlier this evening, the Hawks held a closed-door practice in State Farm Arena. Everyone from members of the media ( myself included ) to the arena staff were asked to leave the bowl. It was clear that Hawks head coach Nate McMillan wanted his team to play with intensity. They did that, but it still wasn't enough.

The Hawks losing streak has now extended to five games. The Knicks took the road win and the season series tonight. Once again, the Hawks could not come up with timely stops and make shots during crunch time. Despite cutting the Knicks lead to two points with 7:26 left in the fourth quarter, the Hawks fell to their rivals 117-108.

There were plenty of highlights for the Hawks tonight. Most importantly, their hustle and physicality made a rare appearance. With no Clint Capela or Bogdan Bogdanovic, the team relied heavily on its bench, which played at a high level for the second straight night. Danilo Gallinari, Onyeka Okongwu, and Lou Williams all deserve praise.

What's not rare is the consistent greatness of Trae Young. The Hawks floor general led the team with 29 points and 5 assists. Unfortunately, Young received little help from his fellow starters.

Other than Quentin Grimes (I see why the Hawks wanted him), the Knicks got almost nothing from their bench. To make matters more challenging, they are still without Derrick Rose and Kemba Walker. All of the Knicks starters stepped up and scored in double digits. Julius Randle and RJ Barrett led the way with a combined for 50 points.

Once again, Capela's absence was felt. The Knicks outrebounded the Hawks 44-31 and scored more points in the paint, 46-36. The Knicks have now won three consecutive games and are hanging on to a play-in spot in the Eastern Conference.

When asked what went wrong in the final three minutes of the game, Hawks head coach Nate McMillan said, "We started taking some quick shots and really bailing the defense out. I thought our second unit came in really did a good job of making them (Knicks) move and play into your third and fourth option. As opposed to really just settling."

McMillan continued, "It was a three-point lead, and it shot to 15 in about four or five possessions. You just got to really be patient, slow down, and make the defense work." The veteran coach wants his young team to under "Time, score, and situation." Instead of "Settling for something quick and trying to get everything back quickly."

Young pointed to two late missed shots from De'Andre Hunter and John Collins that usually go down but weren't as fortunate tonight. "I think we just had some good looks at the end that didn't go down. One or two momentum swings, it's tough..."

When asked about his mindset during this tumultuous stretch, Young remained optimistic. "It only takes a couple runs. I've been doubted and been the underdog my whole life. So I've been able to prove people wrong my whole life. I plan to do it here. That's literally my mindset. I can't speak for anybody. Everybody thinks differently. But for me, I just want to prove people wrong again."

Young wrapped his soliloquy by saying, "I know how to prove people wrong, I know how to get things right. We got to do this together as a team and figure this out. I believe in my people around me."

The Hawks next game is Monday on MLK Day. They host the Giannis Antetokoumpo and the Milwaukee Bucks. As always, we have you covered with the morning scouting report and post-game recap. Stay locked into Sports Illustrated's AllHawks.com .

A daring trade could save two NBA teams from mediocrity.
ATLANTA, GA・2 DAYS AGO
AllLakers

Phil Jackson thinks the Russell Westbrook quandary is similar to when Gary Payton was added to the Shaq-Kobe Lakers.
LOS ANGELES, CA・1 HOUR AGO
All Hawks

How Atlanta Hawks Were Impacted by Draft Lottery

The Atlanta Hawks coaching staff must improve this summer.
ATLANTA, GA・9 HOURS AGO

Despite not being in the Draft Lottery, Atlanta Hawks fans still have reasons to watch.
ATLANTA, GA・1 DAY AGO
All Hawks

The Atlanta Hawks must steer clear of singing these NBA free agents.
ATLANTA, GA・2 DAYS AGO
All Hawks

The Athletic's John Hollinger doesn't expect a deal to be reached this offseason.
ATLANTA, GA・12 HOURS AGO