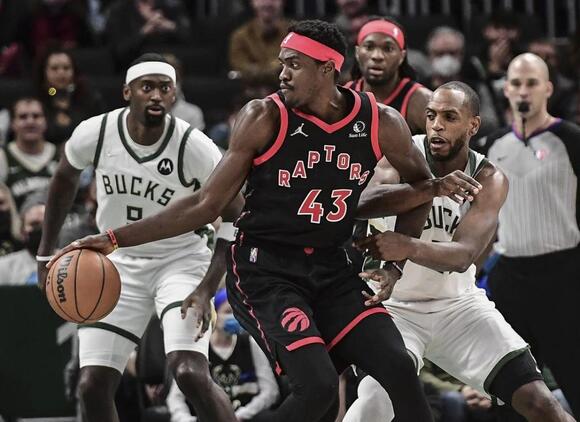 Pascal Siakam notched his first triple-double of the season as the Toronto Raptors took down the Milwaukee Bucks 103-96 on Saturday night to complete a three-game sweep of the season series.

Siakam had 30 points, 10 rebounds and 10 assists to lead the Raptors to their seventh win in the past nine games. OG Anunoby added 24 points on 9-of-23 shooting from the field and Fred VanVleet added 17 points.

Giannis Antetokounmpo paced Milwaukee with 30 points and six rebounds even though he shot only 6-of-17 from the field. Grayson Allen chipped in 18 points, and Khris Middleton had 16. Bobby Portis posted 11 points and 11 rebounds to tally his third double-double in his past five games.

The Bucks made good on 32 of 35 (91.4 percent) attempts at the free-throw line, but the effort was not enough to overcome their sub-35 percent performances from the field and 3-point range.

Neither team led by more than five points for the first nine minutes of the fourth quarter. The Raptors jumped to a six-point lead after Anunoby converted an and-one, and the Bucks had no answer before the final whistle.

Toronto took its first lead of the game at the 9:19 mark in the third quarter and later closed the period on a 14-10 run after Milwaukee had tied the score at 59.

Despite once leading by 15, the Bucks went into the break with a 49-46 lead after Toronto outscored Milwaukee 20-13 through the final 10 minutes of the half. Anunoby had 14 points in the half, VanVleet 13 and Siakam 10.

Allen led all scorers with 15 points in the half, and Antetokounmpo was held to seven points, three rebounds and four assists. The Bucks were efficient from 3-point range, going 8-for-20.

Milwaukee was firing on all cylinders early, starting the game on a 19-5 run. Allen had a quick 10 points, and the Raptors made just one of their first 11 field-goal attempts.

Milwaukee was held to less than 100 points for just the third time including their game on Dec. 18.

Bookmark. Save. Do your thing. We will be providing constant updates on this page as it relates to the biggest
NBA・2 DAYS AGO
Sportsnaut

There’s absolutely no way the Los Angeles Lakers will look into a LeBron James trade this summer, right? Absolutely no
LOS ANGELES, CA・2 DAYS AGO
Sportsnaut

Count Patrick Beverley as one who’s ignored the rapid decline of James Harden over the past few seasons. Sure, it’s
PHILADELPHIA, PA・2 DAYS AGO
Sportsnaut

Here’s our 2022 NBA mock draft with the annual event quickly approaching next month. The Houston Rockets grab a talented
NBA・1 DAY AGO

Game 1 hero Jimmy Butler isn’t much for rating his performance or basking in the achievement, even when topping the
MIAMI, FL・1 DAY AGO
Sportsnaut

The results of the 2022 NBA Draft lottery are now official with the Orlando Magic “earning” the right to pick
PORTLAND, OR・1 DAY AGO
Sportsnaut

It’s funny how 25 months can change the narrative. Former No. 1 pick Andrew Wiggins knows this all too well.
1 HOUR AGO

The Golden State Warriors and Dallas Mavericks will do battle in the NBA Western Conference Finals. The winner of this
MEMPHIS, TN・1 DAY AGO
Sportsnaut

The Golden State Warriors will attempt to reach a high-rent NBA milestone and take a commanding lead in the Western
DALLAS, TX・38 MINUTES AGO
Sportsnaut

The New York Knicks were in talks with the Indiana Pacers about a potential Malcolm Brogdon trade ahead of the
INDIANAPOLIS, IN・39 MINUTES AGO
Sportsnaut

Heading into the annual NBA Draft Lottery set to take place prior to the start of Tuesday night’s Eastern Conference
DETROIT, MI・2 DAYS AGO

Heat favored to claim 2-0 lead at home vs. Celtics

Game 1 hero Jimmy Butler isn’t much for rating his performance or basking in the achievement, even when topping the
MIAMI, FL・4 HOURS AGO
Sportsnaut

Philadelphia 76ers general manager Daryl Morey will reportedly be in the hunt for “another star” to team with the organization’s
PHILADELPHIA, PA・8 HOURS AGO
Sportsnaut

The Indiana Pacers are going to make at least one headline trade this summer after a second consecutive down season
INDIANAPOLIS, IN・1 DAY AGO
Sportsnaut

An emergency protector order was granted by Jefferson County Family Court in Louisville on Friday, two days after the alleged
LOUISVILLE, KY・2 DAYS AGO
Sportsnaut

The Sacramento Kings experienced rare luck in the NBA Draft lottery, moving up to the fourth pick in the 2022
7 HOURS AGO
Sportsnaut

Brooklyn Nets working to distance themselves from Kyrie Irving

Could the Brooklyn Nets be ready to move on from star point guard Kyrie Irving after three years with the
BROOKLYN, NY・20 HOURS AGO
Sportsnaut

Portland Trail Blazers star guard Damian Lillard was on hand as the 2022 NBA Draft lottery was held Tuesday evening.
PORTLAND, OR・1 DAY AGO