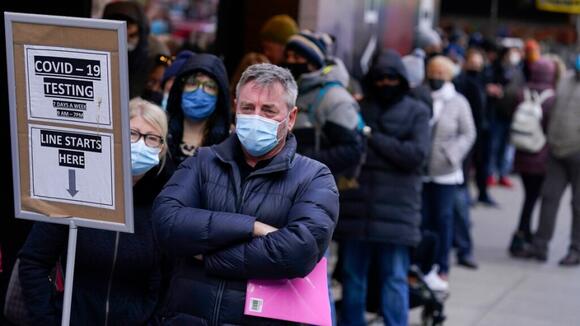 (AP) – Get ready to learn more Greek letters . Scientists warn that omicron’s whirlwind advance practically ensures it won’t be the last version of the coronavirus to worry the world.

Every infection provides a chance for the virus to mutate, and omicron has an edge over its predecessors: It spreads way faster despite emerging on a planet with a stronger patchwork of immunity from vaccines and prior illness.

That means more people in whom the virus can further evolve.

Experts don’t know what the next variants will look like or how they might shape the pandemic , but they say there’s no guarantee the sequels of omicron will cause milder illness or that existing vaccines will work against them.

“The faster omicron spreads, the more opportunities there are for mutation, potentially leading to more variants,” Leonardo Martinez, an infectious disease epidemiologist at Boston University said.

Since it emerged in mid-November, omicron has raced across the globe like fire through dry grass. Research shows the variant is at least twice as contagious as delta and at least four times as contagious as the original version of the virus.

How long do omicron symptoms last?

Omicron is more likely than delta to reinfect individuals who previously had COVID-19 and to cause “breakthrough infections” in vaccinated people while also attacking the unvaccinated. The World Health Organization reported a record 15 million new COVID-19 cases for the week of Jan. 3-9, a 55% increase from the previous week.

Along with keeping comparatively healthy people out of work and school, the ease with which the variant spreads increases the odds the virus will infect and linger inside people with weakened immune systems — giving it more time to develop potent mutations.

“It’s the longer, persistent infections that seem to be the most likely breeding grounds for new variants,” said Dr. Stuart Campbell Ray, an infectious disease expert at Johns Hopkins University. “It’s only when you have very widespread infection that you’re going to provide the opportunity for that to occur.”

Because omicron appears to cause less severe disease than delta, its behavior has kindled hope that it could be the start of a trend that eventually makes the virus milder like a common cold.

It’s a possibility, experts say, given that viruses don’t spread well if they kill their hosts very quickly. But viruses don’t always get less deadly over time.

A variant could also achieve its main goal — replicating — if infected people developed mild symptoms initially, spread the virus by interacting with others, then got very sick later, Ray explained by way of example.

“People have wondered whether the virus will evolve to mildness. But there’s no particular reason for it to do so,” he said. “I don’t think we can be confident that the virus will become less lethal over time.”

Getting progressively better at evading immunity helps a virus to survive over the long term. When SARS-CoV-2 first struck, no one was immune. But infections and vaccines have conferred at least some immunity to much of the world, so the virus must adapt.

There are many possible avenues for evolution. Animals could potentially incubate and unleash new variants. Pet dogs and cats, deer and farm-raised mink are only a few of the animals vulnerable to the virus, which can potentially mutate within them and leap back to people.

Another potential route: With both omicron and delta circulating, people may get double infections that could spawn what Ray calls “Frankenvariants,” hybrids with characteristics of both types.

When new variants do develop, scientists said it’s still very difficult to know from genetic features which ones might take off. For example, omicron has many more mutations than previous variants, around 30 in the spike protein that lets it attach to human cells. But the so-called IHU variant identified in France and being monitored by the WHO has 46 mutations and doesn’t seem to have spread much at all.

To curb the emergence of variants, scientists stress continuing with public health measures such as masking and getting vaccinated. While omicron is better able to evade immunity than delta, experts said, vaccines still offer protection and booster shots greatly reduce serious illness, hospitalizations and deaths.

Anne Thomas, a 64-year-old IT analyst in Westerly, Rhode Island, said she’s fully vaccinated and boosted and also tries to stay safe by mostly staying home while her state has one of the highest COVID-19 case rates in the U.S.

“I have no doubt at all that these viruses are going to continue to mutate and we’re going to be dealing with this for a very long time,” she said.

Ray likened vaccines to armor for humanity that greatly hinders viral spread even if it doesn’t completely stop it. For a virus that spreads exponentially, he said, “anything that curbs transmission can have a great effect.” Also, when vaccinated people get sick, Ray said their illness is usually milder and clears more quickly, leaving less time to spawn dangerous variants.

Experts say the virus won’t become endemic like the flu as long as global vaccination rates are so low. During a recent press conference, WHO Director-General Tedros Adhanom Ghebreyesus said that protecting people from future variants — including those that may be fully resistant to today’s shots — depends on ending global vaccine inequity.

Tedros said he’d like to see 70% of people in every country vaccinated by mid-year. Currently, there are dozens of countries where less than a quarter of the population is fully vaccinated, according to Johns Hopkins University statistics . And in the United States, many people continue to resist available vaccines.

“These huge unvaccinated swaths in the U.S., Africa, Asia, Latin America and elsewhere are basically variant factories,” said Dr. Prabhat Jha of the Centre for Global Health Research at St. Michael’s Hospital in Toronto. “It’s been a colossal failure in global leadership that we have not been able to do this.”

In the meantime, new variants are inevitable, said Louis Mansky, director of the Institute for Molecular Virology at the University of Minnesota.

With so many unvaccinated people, he said, “the virus is still kind of in control of what’s going on.”

An 88-year-old woman was found dead inside a home Thursday in unincorporated El Cajon, according to authorities.
EL CAJON, CA・3 DAYS AGO
FOX 5 San Diego

The man accused of attacking comedian Dave Chappelle earlier this month has been charged with attempted murder for an unrelated stabbing that took place in December.
LOS ANGELES, CA・3 DAYS AGO
FOX 5 San Diego

A 24-year-old woman was hospitalized Thursday after being attacked in her apartment by a group of people including a former roommate and then shot in the neck, police said.
SAN DIEGO, CA・2 DAYS AGO
outbreaknewstoday.com

In a follow-up on the 14th Ebola Virus Disease (EVD) outbreak in the Democratic Republic of the Congo (DRC) (HERE and HERE), the World Health Organization (WHO) tweeted today:. Health authorities in #DRC confirmed a 2nd case of #Ebola in Mbandaka on 25 April. The 25-year old woman, now deceased, began experiencing symptoms 12 days earlier. Investigations indicate that as the 1st case patient’s sister-in-law, she was a high-risk contact.
PUBLIC HEALTH・26 DAYS AGO

A top US official in the Pacific has warned that America would have to “respond” if the Solomon Islands allows China to establish a military base there.Following a “constructive and candid” 90-minute meeting with prime minister Manasseh Sogavare, ambassador Daniel Kritenbrink said that the security deals between China and the Solomon Islands present “potential regional security implications” for the US and other allies.“We wanted to outline for our friends in the Solomons what our concerns are,” Mr Kritenbrink, US assistant secretary for East Asian and Pacific Affairs, told reporters.“We have respect for the Solomon Islands’ sovereignty. But we also...
FOREIGN POLICY・26 DAYS AGO
Daily Mail

Walking at a brisk pace for just 75 minutes every week could cut your risk of depression, a new study finds. The World Health Organization recommends everyone should exercise for at least two-and-a-half hours every seven days. But researchers at Cambridge University, England, found adults who got half as much...
FITNESS・27 DAYS AGO
Newsweek

The poster offered a solution for what someone should do should they see someone in the restroom they don't think matches the sign on the door.
RELIGION・27 DAYS AGO
Salon

A plethora of downright bizarre scientific research from the Department of Defense previously kept under wraps has been uncovered, revealing an array of peculiar schemes proposed by the United States military. One outlandish proposal suggested detonating nuclear bombs on the moon to create a tunnel through it. Millions in taxpayer dollars were spent on the research, which appears to have relied on a contractor, Bigelow Aerospace Advanced Studies, which was owned by multi-millionaire Robert Bigelow, a hotel impresario. The public was kept in the dark until now regarding what research was being funded.
ASTRONOMY・26 DAYS AGO

MILLIONS of Brits have been urged to take up a rapid test to see if they have bowel cancer. The Health Secretary has called on men over 60 to make sure they have the life-saving checkups. It couldn't be easier - with a home testing kit on offer, or use...
CANCER・27 DAYS AGO
Newsweek

Sign up for the Fortune Features email list so you don’t miss our biggest features, exclusive interviews, and investigations. Shanghai’s 25 million residents have endured an extreme COVID lockdown for nearly a month—and now a new nightmarish topic is trending on Weibo, the country’s Twitter-like social media platform.
PUBLIC HEALTH・27 DAYS AGO

Tragic events like wars, famines, earthquakes, and accidents create fearful memories in our brain. These memories continue to haunt us even after the actual event has passed. Luckily, researchers from Tokyo University of Science (TUS) have recently been able to understand the hidden biochemical mechanisms involved in the selective suppression of fearful memories, which is called fear extinction. The researchers, who had previously demonstrated fear extinction in mice using the chemically synthesized compound "KNT-127," have now identified the underlying mechanism of this compound's action. Their findings have been published recently in Frontiers in Behavioral Neuroscience.
SCIENCE・27 DAYS AGO
Business Insider

The former F-35 test pilot Billie Flynn told The Aviationist that moving to the "cosmic spaceship" that is the F-35 was too much to ask of MiG pilots.
AEROSPACE & DEFENSE・27 DAYS AGO
FOX 5 San Diego

A man and his wife who both died in what police believe was a murder-suicide inside a San Diego home were identified Friday, authorities said.
SAN DIEGO, CA・2 DAYS AGO
FOX 5 San Diego

4 caught after swimming around international border

Many more asylum-seekers are border bound whether Title 42 is in place or not, migrant says

"Whether it's crossing the desert or any other way, people will come."
YUMA, AZ・3 DAYS AGO
FOX 5 San Diego

A San Diego felon suspected of building multiple firearms and selling narcotics in El Cajon and throughout East County was arrested Thursday, according to authorities.
SAN DIEGO, CA・2 DAYS AGO
FOX 5 San Diego

A person was struck and killed by a falling tree Friday as workers were cutting down trees at a home near Lake Hodges in North County, according to authorities.
SAN DIEGO COUNTY, CA・2 DAYS AGO
FOX 5 San Diego

A man was jailed early Friday on suspicion he twice stabbed another man in a fight in the City Heights area, police said.
SAN DIEGO, CA・2 DAYS AGO