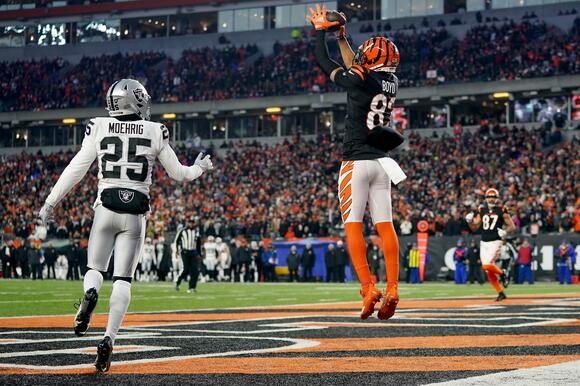 What started as an impressive touchdown pass from Cincinnati Bengals QB Joe Burrow in the second quarter Saturday quickly developed into a major controversy.

Burrow threw his second touchdown against the Las Vegas Raiders to receiver Tyler Boyd, giving the Bengals a 20-6 lead. He let go of the 10-yard TD pass just before stepping out of bounds.

However, as NBC later showed replays of the touchdown, it was clear that an official had blown his whistle erroneously before the catch was made. Per NFL rules, that should have ended the play, negating the touchdown.

NBC's rules expert Terry McAulay said during the broadcast, "They can't have a touchdown on that play, by rule."

After the game, which the Bengals won 26-19 , Walt Anderson – the NFL's senior vice president of officiating – said in a pool report that the referees determined after a conference that the whistle was blown after Boyd had caught the ball.

"They did not feel that the whistle was blown before the receiver caught the ball," Anderson said. Because the ball was not in the air by the referees' estimation when the whistle was blown – which replays still seem to contradict – the play was considered complete and was reviewed for whether Burrow or Boyd stepped out of bounds.

But Anderson confirmed that an "erroneous whistle is not a reviewable play."

The play proved to be important as the Bengals never scored a touchdown again. But they held on for the win – their first playoff victory in 31 years.

The broadcasting duo of Joe Buck and Troy Aikman will give "Monday Night Football" a different feel during the 2022 NFL season.
NFL・9 HOURS AGO
USA TODAY

Dan Campbell said he prefers 1 p.m. games for Detroit Lions because they give him extra time to start preparing for the next week's opponent
DETROIT, MI・20 HOURS AGO
USA TODAY

Report: Drew Brees out as analyst for NBC after one season

From Bills vs. Rams in the season opener to Joe Burrow vs. Tom Brady in Week 15, these are the NFL's best matchups of 2022

The NFL's 272-game regular-season schedule is out and we select the must-see games of the 2022 season.
NFL・22 HOURS AGO
USA TODAY

Browns QB Deshaun Watson to meet with NFL officials this week, then host teammates in Bahamas

Browns QB Deshaun Watson is scheduled to meet with the NFL this week and host his teammates in the Bahamas.
CLEVELAND, OH・15 HOURS AGO