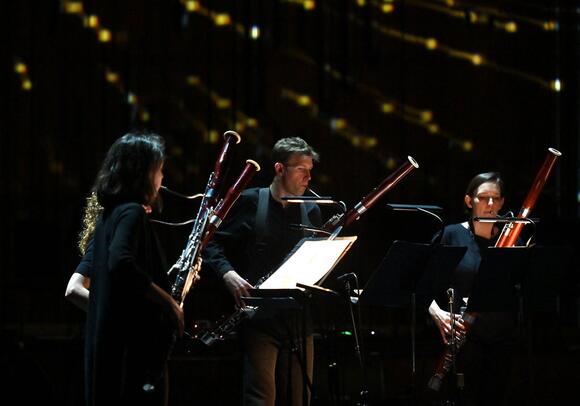 The London Contemporary Orchestra (LCO) will be performing a continuous 24-hour concert live at the Barbican Hall.

Members of the audience will be encouraged to come and go during the overnight performance – which features a series of works from modern classical to electronic music.

The Barbican Hall will be lit up with evolving projections designed by Hungarian artist Laszlo Zsolt Bordos.

The concert includes new performances from electronic musicians KMRU, Actress, and Powell who each perform for three hours with a group of acoustic musicians.

The late night focal point will be Morton Feldman’s String Quartet No. 2 – a six-hour piece.

Meanwhile, smaller works are scattered throughout the day to break up the longest moments of music.

Speaking to The Barbican, conductor Robert Ames said the idea of a 24-hour concert has been on LCO’s mind for about five years, and he is curious to see how an audience would react to 24 hours of music.

Ames, 36, said: “I’m super interested to see if anybody’s going to stick it out for 24 hours and to see if there are any breaking points for people, if there’s a mass exodus at certain points or loads of people coming at other points. 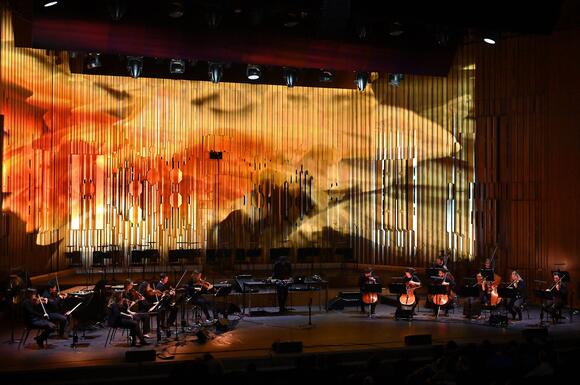 “It’s going to be a very concentrated place where people can just hopefully unlock a deeper sense of either relaxation or thinking, or it could even be intense thinking.

“Hopefully, if somebody comes at five o’clock in the morning for two hours, and then comes back at midnight for an hour, they’ll see something that feels familiar but looks different.”

The concert features a breadth of music history, with pioneering 20th century composers like John Cage and Eliane Radigue – and modern compositions from artists Michael Gordon and Mica Levi.

The performance will be held at the Barbican Concert Hall, one of Europe’s leading venues for orchestral and contemporary music events, at 6pm on January 15.

Mick Jagger has praised Machine Gun Kelly and Yungblud for making sure there is still "life in rock 'n' roll". In conversation with The Independent, The Rolling Stones frontman discussed the rock landscape in the modern era, expressing what he sees as a recent lack of young bands taking the genre forward and pointing to MGK and Yungblud as two artists finally bucking the trend.
MUSIC・26 DAYS AGO
The Independent

Tom Cruise has confirmed that he never considered releasing Top Gun: Maverick to streaming first, despite Covid delaying the film’s intended release date. The new action movie – which sees Cruise as the Navy’s top pilot, who must confront the ghosts of his past – is a sequel to the original 1986 movie, in which he also starred.After its original premiere date of 24 June 2020 was delayed nearly two years by the pandemic, the film is now scheduled to release in cinemas on 24 May.Speaking on Wednesday (18 May) at the Cannes Film Festival, Cruise was asked whether...
MOVIES・3 DAYS AGO
The Independent

It's taken a lot of time and a good deal of yearning for Australian director George Miller to make “Three Thousand Years of Longing, " his long-awaited follow-up to “Mad Max: Fury Road." Miller premiered “Three Thousand Years of Longing” over the weekend at the Cannes Film Festival, the culmination of a journey that began 20 years ago when Miller first read the A. S. Byatt story upon which the film is based, “The Djinn in the Nightingale’s Eye.” But it was only when frictions over the profits from “Fury Road” — Miller's operatic action opus — opened a...
MOVIES・1 HOUR AGO
The Independent

Most in the film industry thought Ethan Coen was done with making movies. Ethan did, too. But on Sunday, Coen will premiere his first documentary, “Jerry Lee Lewis: Trouble in Mind," at the Cannes Film Festival, a movie that was unknown until last month's festival lineup announcement. The film, which A24 will distribute later this year, is a blistering portrait of the rock ‘n’ roll and country legend, made almost entirely with archival footage, with riveting extended performances instead of talking heads.It's Coen's first film with his brother Joel, with whom he for three decades formed one of the...
MOVIES・4 HOURS AGO