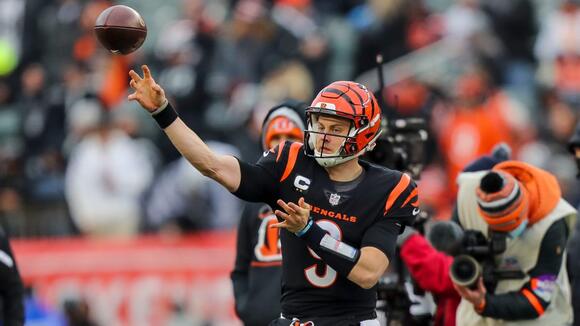 Joe Burrow nearly stepped out of bounds as he threw the pass, as it sounded like a whistle was blown before the touchdown was scored.

Joe Burrow’s second touchdown pass of the game in the Bengals’ wild-card matchup vs. Raiders came with some help from his mobility in the pocket—and perhaps a little from an official’s rogue whistle.

As Burrow scrambled toward the sideline with Cincinnati driving late in the second quarter, he released the ball just before stepping out of bounds. Just before the pass reached Tyler Boyd in the end zone, a whistle could be heard on the broadcast, which caused some confusion for NBC’s broadcast team of Mike Tirico and Drew Brees.

Rule 7, Section 2(m) of the NFL’s rulebook states that, “When an official sounds his whistle erroneously while the ball is still in play, the ball becomes dead immediately,” per the NFL Network’s Tom Pelissero . NBC’s on-air rules analyst Terry McAulay—a former NFL official—said during the broadcast that the inadvertent whistle should have resulted in the down being replayed. The league has declined to comment on the incident so far, deferring to McAulay’s breakdown of the play, per Pelissero . Tirico said during the third quarter that the league would be issuing a statement after the game.

The touchdown gave Cincinnati a 20–6 lead, though the Raiders did rally to score just before halftime to cut the deficit to 20–13. Regardless of how the game plays out, the officiating blunder will surely draw scrutiny throughout the postseason.

After the game, Walt Anderson, the NFL's senior vice president of officiating, said that the referees discussed the whistle on the field but determined that it occurred after the play had ended.

"They got together and talked and determined that they had a whistle," Anderson said, per Paul Dehner Jr. of The Athletic . "But that the whistle for them on the field was blown after the receiver caught the ball."

For more Cincinnati Bengals coverage, go to All Bengals .

The Bills are doing their part to help the Buffalo community heal.
BUFFALO, NY・1 DAY AGO
Sports Illustrated

The five teams with the hardest schedules in the 2022 season are from the same two divisions.
KANSAS CITY, MO・1 DAY AGO

But how will change at QB affect Pittsburgh’s pass catchers?
PITTSBURGH, PA・1 DAY AGO
Sportsnaut

A grand jury indicted former Georgia linebacker Adam Anderson on Tuesday and charged him with rape. Anderson will be arraigned
NFL・27 DAYS AGO
Sports Illustrated

The six-time All-Star was ruled for the rest of Saturday’s contest against the Celtics after logging 20 minutes in the first half.
MIAMI, FL・2 DAYS AGO

The Michigan coach was pursued by the Lakers for their head coaching vacancy.
LOS ANGELES, CA・2 DAYS AGO
Sports Illustrated

Tannehill ‘Disappointed‘ by How Mentorship Remarks Were Taken

The veteran QB said his previous comments were blown out of proportion.
NFL・2 HOURS AGO

The 41-year-old has ultimately decided to stay on the sidelines.
NFL・1 DAY AGO
Sports Illustrated

Beware these 10 players, whose might be overvalued for various reasons.
NFL・1 DAY AGO
Sports Illustrated

He left NBC Sports to join Amazon this offseason but will return in a different role.
NFL・1 HOUR AGO
Sports Illustrated

He threw for 2,527 yards and nine touchdowns to 13 interceptions in 2021.
NFL・1 HOUR AGO
Sports Illustrated