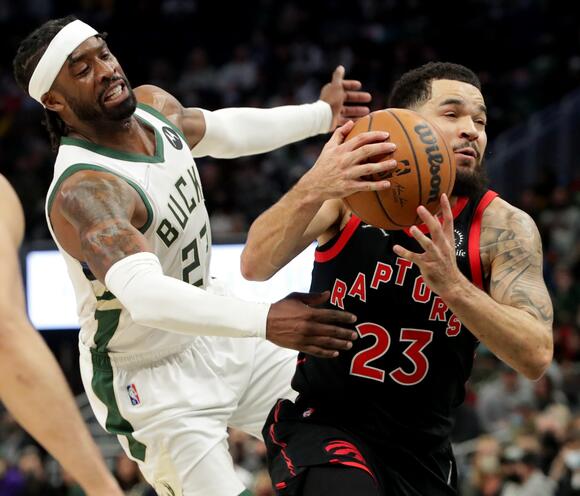 Winning a championship exorcises any demons for a franchise, so if the Milwaukee Bucks were to drop regular-season games to teams like Boston, Miami or Brooklyn there isn’t much reason for concern.

Hiccups along the way toward the postseason should be excused. But if there has been one involuntary contraction of the diaphragm that the Bucks just can’t seem to scare away it’s been the Toronto Raptors.

Nick Nurse’s team isn’t so much of a boogeyman anymore as they are the goosebumps from the memory of a past nightmare.

And with a 103-96 Raptors victory at Fiserv Forum on Saturday evening, Toronto proved once again it can make Milwaukee (27-18) stop and shudder. The Raptors have now won five of their last six regular-season matchups against the Bucks and three of their 21 wins this season have come against the defending champions.

Podcast: Bucks guard Jrue Holiday is making slow progress; Grayson Allen is feeling good, and what about the all-star voting?

More: Here are the Milwaukee Bucks midseason awards and highlights

Pascal Siakam, a specter hovering around the Bucks for years, scored eight straight points for the Raptors with a pull-up three, stripping Giannis Antetokounmpo to earn two free throws and then hitting a leaning 12-footer with 29.3 seconds left to effectively seal the victory at 102-94.

Siakam had a triple-double 30 points, 10 assists and 10 rebounds while playing with five fouls for the final 8:45.

Toronto also did a good job in slowing down Antetokounmpo, who played for the first time in the season series. Antetokounmpo made just 6 of his 17 shots, including 1-for-3 from behind the three-point line.

Nurse said before the game he noticed how the Bucks had gotten out to a fast pace and moved the ball against Golden State on Thursday night, so the Raptors slowed the game down and prevented the Bucks from finding any kind of offensive rhythm.

Antetokounmpo said Toronto was able to do that by rebounding well and preventing the Bucks from getting out in transition, picking the Bucks up full court to make them work the ball up, were switching effectively on ball screens and close out intensively on three-point shooters to make them put the ball on the court.

Toronto’s eight players committed 25 fouls, and though Antetokounmpo went 17-for-17 from the free throw line and Middleton 8-for-9, the Bucks just couldn’t score enough baskets to overtake the Raptors in the fourth quarter.

“I mean, it’s interesting,” Bucks head coach Mike Budenholzer said. “It’s a hard, fine line. Giannis gets 17 free throws, but I think you could argue he could have 27 or 30 free throws. As a team, we had 35. I think you could argue that we could have had 45 or 50. But, you know, it’s a credit to Toronto, credit to the way they play defense. They’re well coached. We just have to find a way to be better, but it’s… yeah.”

After a pair of George Hill three-pointers pulled the Bucks to 78-76, Milwaukee didn’t make another field goal for 3 minutes, 50 seconds despite keeping the deficit at just two points.

Toronto limited Grayson Allen and Bobby Portis after the first half, as the Bucks shooters were a combined 0-for-5 in the final 24 minutes. Antetokounmpo led the team with 30 points and Middleton had 16, with Allen (15) and Portis (11) reaching double figures.

OG Anunoby fouled out against Antetokounmpo, but not before scoring 24 points on 9 of 23 shooting. Fred VanVleet had 17 points and Precious Achiuwa had 14 points and 10 rebounds. Chris Boucher had 15 points off the bench and Justin Champagnie pulled down 12 rebounds in reserve. The Raptors out-rebounded the Bucks 51-41 and limited Milwaukee to six second-chance points.

The Raptors took their first lead of the game when they went on a 9-0 run early in the third quarter to take a 55-52 lead with 8:37 to go in the frame, and would lead by as many as six points before holding a 73-69 advantage going into the fourth.

After taking that lead the Raptors never gave it up as the Bucks mad just five of their 18 shots. Toronto finally hit some three-pointers, making 5 of 10 from deep after making only four the entire first half. Threes by Siakam, Van Vleet and a pair by Boucher helped the Raptors keep a small advantage whenever the Bucks cut it to a possession.

Toronto whittled away a 15-point Milwaukee lead before Pat Connaughton stepped into a three-pointer with 38.5 seconds left in the half to give the Bucks a 49-46 lead at the break. The Bucks got out to the double-digit lead early in the game thanks to some hot shooting from Allen and a cold start by Toronto, jumping out to a 22-7 lead in the opening six and a half minutes of the game.

The Bucks once again pushed their lead to double digits early in the second quarter at 36-26 with 10 minutes left in the quarter and though their offense slowed down after that they still led 46-37 with 3:26 to go. But in those final minutes, the Bucks turned it over four times and missed two shots as the Raptors eventually tied it 46-46 with 45 seconds left.

Toronto only made 4 of its 15 three-pointers but scored 10 points off eight Milwaukee turnovers.

Portis was the only other Bucks player to reach double figures with 11 points. He also pulled down eight rebounds. Antetokounmpo made 2 of his 6 shots for seven points while Middleton made 2 of his 5 for eight points. Anunoby scored 14 to lead the Raptors while VanVleet (13) and Siakam (10) also reached double figures. Champagnie had 10 rebounds.

The Raptors held out star rookie Scottie Barnes for injury management reasons since they had played in Detroit on Friday, and they were also without Gary Trent Jr. (ankle) for the fourth straight game.

Bucks point guard Jrue Holiday missed his fourth straight game with left ankle soreness (and fifth overall). He injured the ankle on Jan. 5 against the Raptors.

“No, I don’t think there’s concern that it’s gonna be long term but he’s obviously not available tonight,” Budenholzer said before the game. “We’ll see how the next few days go and just kind of take it; I think he’s making progress. He’s in a good place so we’ll just see how long it takes.”

The Bucks head to Atlanta to face the Hawks on Monday.

Subscribe to our Milwaukee Bucks newsletter for updates on the team.