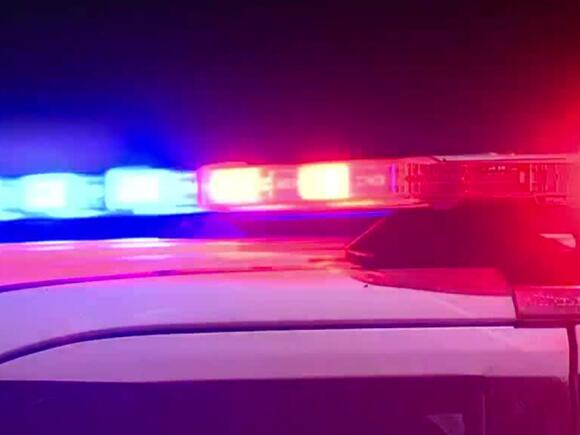 According to the sheriff's office, at about 9 p.m. Friday deputies responded to the area of East Dawson Drive in reference to a shooting.

There deputies saw a victim with apparent gunshot wounds lying on the driveway. EMS arrived and began treating the victim. That person was air-lifted to Marion County for medical treatment, but was later pronounced deceased at the hospital.

Witnesses told deputies the suspected shooter tried to break into their home before running from the scene.

Through witness statements, deputies were able to identify the suspect as 29-year-old Daniel Arthur Redman, who the sheriff's office says was just released from prison on January 9, 2022.

With the assistance of a K-9 unit, deputies tracked Redman to a motor home about a quarter-mile away.

There they saw Redman holding another victim, with obvious injuries, as a hostage, CCSO said.

They say Redman refused to comply and reached behind his back towards his waistband.

At that point, fearing for the safety of others, the suspect was shot one time, the sheriff's office said.

Deputies immediately secured Redman and rendered first aid until he was transported to the hospital for medical treatment.

"In what has proven to be a terrifying night for our community, the immediate actions of our deputies saved other victims from further terror caused by this convicted felon," stated Sheriff Prendergast. "Thanks to our deputies' quick thinking and superior performance, they were able to protect our community from further harm."

Multiple charges are pending in this case, which is still under investigation.

The deputy who fired the shot has been placed on administrative leave while FDLE investigates, as is standard procedure.

A burglary suspect in Bradenton trying to escape police officers jumped into a pond and never resurfaced.
BRADENTON, FL・3 DAYS AGO

St. Petersburg Police officers are looking for a driver who they say hit and killed a person on an electric scooter early Saturday Morning on 34th Street North. Officers say a driver hit the person on a black e-scooter then left the scene. It happened just before 3am on Saturday.
SAINT PETERSBURG, FL・2 DAYS AGO
ABC Action News WFTS

Child injured after being shot in the leg

A child was injured in a shooting outside of a rec center in St Petersburg.
SAINT PETERSBURG, FL・4 DAYS AGO
ABC Action News WFTS

Palmetto Police arrested a 13-year-old boy from Bradenton for allegedly firing a shot during a fight at a football game.
BRADENTON, FL・5 DAYS AGO
ABC Action News WFTS

The Pasco County Sheriff's Office (PCSO) said an 18-year-old has been arrested for murder in relation to a shooting in Dade City that left two kids injured and a man dead Wednesday afternoon. A second person has been arrested in connection to the shooting.
DADE CITY, FL・7 DAYS AGO

A dual-engine propeller plane ended up off the runway Monday afternoon at St. Pete–Clearwater International Airport. The pilot of the twin-engine Cessna was uninjured and walked away from the plane safely.
CLEARWATER, FL・2 DAYS AGO
ABC Action News WFTS

Special Needs Registry helps those with medical conditions during disasters

Hillsborough County is seeking input from the public on plans to improve the growing downtown in Wimauma.
WIMAUMA, FL・1 DAY AGO

Tonight, as we collectively process the Uvalde shooting, many are wondering how we can prevent this from happening again. It's a question we took to local leaders and experts and even a parent, who has lost a child in a similarly tragic event.
FLORIDA STATE・8 HOURS AGO
ABC Action News WFTS

For decades residents of the Childs Park neighborhood in St. Petersburg complained of a foul odor that wafts through their yards and seeps into their homes. Residents had a chance to speak with local authorities about their concerns Tuesday evening.
SAINT PETERSBURG, FL・7 DAYS AGO
ABC Action News WFTS

Riverview teen uses birthday to raise money for the hungry

Armed Forces Day is an annual holiday that pays tribute to the men and women who serve across all six branches of the U.S. military. This year, it's being celebrated on Saturday, May 21.
TAMPA, FL・5 DAYS AGO
ABC Action News WFTS

Several shelters across Tampa Bay are at capacity, and it's leaving many single moms with nowhere to turn.
TAMPA, FL・5 DAYS AGO