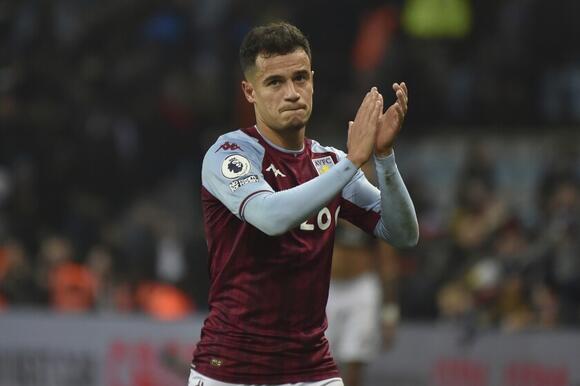 Philippe Coutinho came off the bench to score a late equalizer on his debut for Aston Villa in a 2-2 draw against Manchester United in the English Premier League on Saturday.

United had just taken a 2-0 lead, thanks to Bruno Fernandes' second goal of the game, when Coutinho entered as a substitute to loud cheers at Villa Park.

The Brazil playmaker played a part in Jacob Ramsey's 77th-minute goal that gave Villa hope, then turned in a low cross from Ramsey at the far post five minutes later in front of the Holte End.

It was a second match in six days between the teams, with United having edged a somewhat fortuitous 1-0 win in the FA Cup on Monday.

Ralf Rangnick’s side looked on course for another hard-fought victory against Villa after Emiliano Martinez let a long-range shot from Fernandes squirm through his grasp and through his legs in the sixth minute.

Fernandes, the stand-in captain with Harry Maguire and Cristiano Ronaldo still missing because of injuries, added a brilliant second in the 67th from a shot in off the crossbar after Villa lost possession in its own half.

Coutinho provided a wild end to a thrilling encounter that United started impressively without Ronaldo for a second straight game.

United stayed seventh, a point behind Tottenham having played two games more. Spurs were due to play Arsenal on Sunday but the game was called off on Saturday .