The Fight Fan: Previewing what's to come in UFC in first quarter of 2022 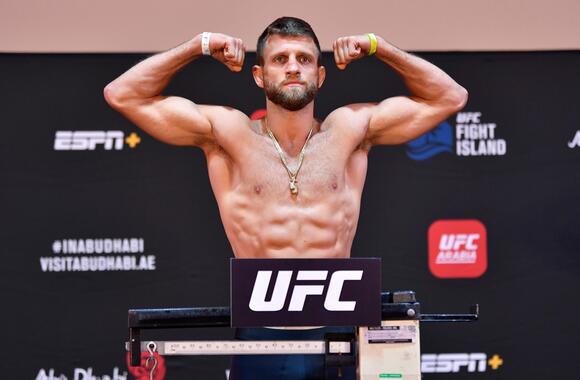 On the latest episode of The Fight Fan, Pete Hoffman previews what is to come in the first quarter of the new year for the UFC, and previews UFC on ESPN 32, which kicks off on Saturday night.

The main event features Calvin Kattar and Giga Chikadze, who will help welcome back UFC action for the first time in over a month. Chikadza will put his perfect 7-0 record to the test in Las Vegas.

Listen to the full episode of The Fight Fan below:

Holly Holm and Ketlen Vieira came face-to-face at the conclusion of the UFC Vegas 55 weigh-in event on Friday, just one day ahead of their bantamweight main event on May 21 at APEX in Las Vegas, streaming exclusively on the ESPN+ digital network. “The Preacher’s Daughter” tipped the scale at 135.5 while “Fenomeno” weighed in at an even 136.
LAS VEGAS, NV・1 DAY AGO
Rolling Stone

Watch Holly Holm vs. Ketlen Vieira full fight video highlights from their UFC Vegas 55 clash above, courtesy of the UFC. Holm vs. Vieira took place May 21 at UFC APEX in Las Vegas. Holly Holm (14-5) and Ketlen Vieira (12-2) collided in the UFC Vegas 55 main event. The fight aired live on ESPN+.
UFC・8 HOURS AGO

Floyd Mayweather’s next fight: What’s next for ‘Money’ after his win in Abu Dhabi?

Following his easy win over Don Moore in Abu Dhabi on May 21, Floyd Mayweather’s next fight might come later
COMBAT SPORTS・5 HOURS AGO
Yardbarker

The UFC is on ESPN this weekend with the return of former Bantamweight Champion Holly Holm!. BetSided's Iain MacMillan and Reed Wallach set the stage for UFC Vegas 55: Holm vs. Vieira with their weekly betting draft and fight preview, but both stayed off of the main event; citing concerns about Holm's form off of a near-two year absence from the octagon.
UFC・1 DAY AGO
MMAmania.com

Two of the greatest combat athletes of all time will be in action later today (Sat., May 21, 2022) live on pay-per-view (PPV) stream from Etihad Arena in Abu Dhabi, as boxing legend Floyd Mayweather Jr. and former UFC champion Anderson Silva make their returns to the boxing ring. Mayweather,...
COMBAT SPORTS・20 HOURS AGO
MMAmania.com

The Professional Fighter’s League (PFL) intends to further give back to its athletes starting in 2023. With the promotion’s seasonal tournament format remaining at the core, next year will see pay-per-view (PPV) events introduced into the fold. Speaking with MMAMania.com in March 2022, PFL Founder Donn Davis revealed that the upcoming PPV series will take place every quarter with four events a year. Two-time Lightweight champion Kayla Harrison is officially the first fighter to be signed for the series and this current season will be her last.
COMBAT SPORTS・2 DAYS AGO

Friday's Yankees-White Sox game postponed, to be made up in doubleheader Sunday

Gates at Yankee Stadium will open at 2 p.m. Sunday for a single-admission doubleheader. Game 1 will begin at 3:05 p.m. and Game 2 will begin at 7:05 p.m. or approximately 30 minutes after the conclusion of Game 1, whichever is later.
NEW YORK CITY, NY・1 DAY AGO
MMA Fighting

UFC welterweight Michel Pereira is dealing with a DUI case in Las Vegas, MMA Fighting has learned. The incident won’t affect his upcoming fight with Santiago Ponzinibbio, which is set as the co-main event of UFC Vegas 55 on Saturday at UFC APEX. Speaking with MMA Fighting on Wednesday,...
LAS VEGAS, NV・2 DAYS AGO
MMAmania.com

Sara McMann and Aspen Ladd will square off in a battle of old school vs. new at the upcoming UFC “Fight Night” event on Aug. 13, according to All Access MMA, a booking that comes nearly two years after the promotion first tried to pair them off in Las Vegas.
LAS VEGAS, NV・1 DAY AGO
WFAN Sports Radio

The Rangers dropped each of the first two games in Carolina, where the Hurricanes haven’t lost yet this postseason, but Gerard Gallant was “happy” with the overall effort.
NEW YORK CITY, NY・21 HOURS AGO
MMA Fighting

Julianna Peña and Amanda Nunes have a date for their rematch. On Saturday’s UFC Vegas 55 broadcast, the UFC announced the two will headline UFC 277, which takes place at American Airlines Center in Dallas on July 30. Peña pulled off one of the biggest upsets in MMA...
DALLAS, TX・7 HOURS AGO
WFAN Sports Radio

Soccer in the City: Blue Wave rolling and Tinnerholm's future

On the latest Soccer in the City, the gang discusses NYCFC’s recent run and reviewd the commentary of Anton Tinnerholm on the New York City FC Network - where he gave a timetable on his return from injury and talked about his future with the club.
NEW YORK CITY, NY・1 DAY AGO
numberfire.com

With no real offseason, the Ultimate Fighting Championship holds no short of a dozen mixed martial arts bouts nearly every Saturday. As one of the most unique DFS sweats available, UFC daily fantasy is live on FanDuel. The strategy behind this fantasy sport is intriguing. Given that two fighters face...
LAS VEGAS, NV・1 DAY AGO