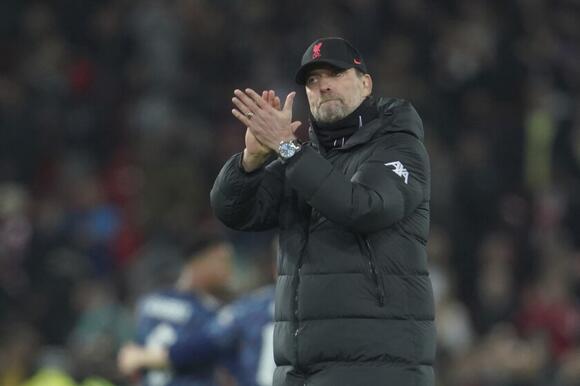 Liverpool will look to reduce the gap to Premier League leader Manchester City to 11 points by beating Brentford at home. A win would lift Liverpool to second place above Chelsea but the team remains without star attackers Sadio Mane and Mohamed Salah, who are at the African Cup of Nations. Liverpool looked much less threatening without Mane and Salah in a 0-0 draw with Arsenal in the League Cup on Thursday. The other game sees West Ham and Leeds meet for the second weekend in succession, after an FA Cup third-round match won by West Ham. The Hammers can consolidate fourth place with another victory.

Fresh from winning the Italian Super Cup midweek, Inter Milan will be looking to take a step towards another title. If the defending champion wins at fourth-placed Atalanta, it will move four points clear of second-placed AC Milan in the Serie A. But Atalanta will also be full of confidence after winning 6-2 at Udinese last week. Roma is without a win in three matches and Jose Mourinho’s side goes into the home match against relegation-threatened Cagliari off the back of two straight losses. Venezia is only one point above the drop zone and hosts Empoli, while Hellas Verona travels to Sassuolo with just one point separating the two sides in mid-table.

Third-tier Atlético Baleares hosts Valencia in the Copa del Rey round of 16 seeking to knock out a third top-flight team. The minnow from the island of Mallorca humiliated Getafe 5-0 in December and beat Celta Vigo 2-1 this month. Valencia midfielder Carlos Soler and defender Gabriel Paulista are doubtful as they recover from injury. Also, Villarreal plays at Elche in the Spanish league after winning four of its last five games in the competition.

Eintracht Frankfurt heads to Augsburg looking for a win to build some momentum in its push for the European places after giving up a two-goal lead in losing to Borussia Dortmund 3-2 last week. Frankfurt is without goalkeeper Kevin Trapp and winger Filip Kostic after revealing both tested positive for the coronavirus with "mild symptoms.” The league's bottom two teams meet when Arminia Bielefeld hosts Greuther Fürth, with Bielefeld hoping to climb out of the relegation zone with a win.

The pick of the matches sees third-placed Marseille hosting defending champion Lille, which is looking to sign former Marseille and France winger Hatem Ben Arfa as a free agent. Marseille needs a victory to move level on points with second-placed Nice. Elsewhere, Rennes and Montpellier try to overtake Lens in fourth place. Fifth-placed Rennes looks to avoid a fourth straight league defeat when it hosts struggling Bordeaux. Montpellier is level on points in sixth spot and seeks a fifth straight win when it travels to the Alsace region to play improving Strasbourg.

As the item itself is on the verge of an historic auction in the coming days, the story behind just how Sergio Aguero's iconic 93:20 match shirt once got lost in a kit bag has been revealed.
PREMIER LEAGUE・35 MINUTES AGO
Absolute Chelsea

The Premier League are set to give the 'green light' to Todd Boehly and his takeover of Chelsea Football Club, according to reports.
PREMIER LEAGUE・35 MINUTES AGO