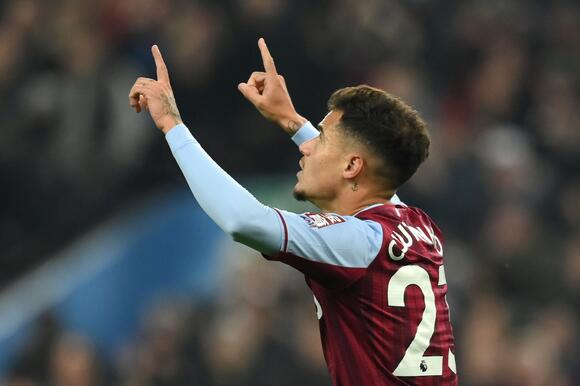 Aston Villa rescued a 2-2 draw in the Premier League against Manchester United after mistakes led to both of the visitors goals.

It was an awful start from Villa. Bruno Fernandes took a soft free kick and took his time to strike. When he did, it was a deft touch and goalkeeper Emiliano Martínez looked to have caught it. But he dropped it through his legs to put United ahead.

Mason Greenwood had a few chances and Villa threw all they had at United in the closing minutes of the first half but heading into the break the visitors were still 1-0 up.

Villa looked dangerous in the second half with multiple shots at goal. However, Morgan Sanson’s sloppy pass in his own half gifted the ball to Fred who fed Fernandes who scored a beauty.

But Villa fought their way back in as Jacob Ramsey scored, his first goal at Villa Park, and it was a dream start for loan signing Philippe Coutinho who scored the equaliser with less than ten minutes to go.

Here are the player ratings from Villa Park:

The keeper had a nightmare start as he dropped the ball through his legs in an attempt to catch Fernandes’ free kick. He slightly redeemed himself to make sure United didn’t double their lead as he came out to meet Greenwood to make a great save.

He then was forced to make another save from a free kick.

The keeper had to deal with an Elanga shot early in the second half and saved well.

The star didn’t look confident in the opening moments of the match and didn’t settle in the first half. He over hit the ball to add the Villa’s shaky start and Elanga was able to run round him to almost get a shot at goal.

He also gave away a free kick and in the second half a passing mistake gifted Elanga a shot at goal.

Konsa did have some good defending moment with a great sliding tackle to disrupt a United attack.

He also won a free kick after a foul from Elanga but it also saw him have to receive treatment for an injury. The problem saw him subbed off at half-time.

The captain didn’t inspire his players when they went a goal down in the first half. He was solid and cleared balls when needed but didn’t do enough in the first 45.

He was involved in some promising attack play in the second half.

The match was Lucas Digne’s first Premier League start for Villa after signing from Everton. His first touch was a good clear from a corner.

He received a yellow card for a foul on Dalot but had a great shot at goal. Fans will be hoping there’s more to come from their new man.

Sanson had a good first half with a good block on Telles long pass and an impressive sliding tackle stopped Fernandes’ having a shot at goal.

A sloppy pass in his own half gifted the ball to United and it led to the second goal. He was subbed off shortly after.

Luiz has little impact first half but did deliver a solid corner kick.

A miscommunication between him and Ings led to another chance wasted.

Luis did get involved in good attack play early into the second half with a great cross in. Gave away a free kick from a sloppy challenge.

Another player who had little impact and when he was on the ball he gave it away through a miss pass.

He got a shot away but there wasn’t enough power on it to make an impact. Ramsey fired Villa back into the match a sensational shot.

He assisted Coutinho’s goal and earned Man of the Match.

Buendia was arguably Villa’s best attacking player with good high press and he almost got an equaliser from a corner.

He had another shot at goal and it was a powerful strike but De Gea saved well.

Ings wasn’t given a lot of ball but when he did he looked dangerous. So much so Matic earned himself a yellow for a foul.

A miscommunication between him and Luis led to them gifting possession away again.

Watkins didn’t have the brightest start.

A miss pass saw him kick the ball straight out of play. He had a shot but it was an easy shot for De Gea to collect.

He did get better as the game went on and created chances for his side.

What a return to the Premier League for the star. He signed for Villa on loan and entered the game when Villa were 2-0 down and he was ultimately the difference.

He assisted Ramsey’s goal and then fired home to put Steven Gerrard’s side level. The draw felt like a victory for the home side and Villa fans made it known who their new hero is.

Unloved at Barcelona but shot to hero-ship at Villa.

The keeper saved an easy shot from Watkins and a tricky chance from Buendia.

Weathered a storm of Villa attack towards the end of the first half.

De Gea’s reactions were lightning fast throughout the match with them coming into play with Ramsey’s shot and Buendia’s shot.

There wasn’t anything the keeper could do to stop Ramsey’s goal but Coutinho's strike could’ve been saved.

He had a cracking great long kick which got the ball into the box but United teammates weren’t there to collect.

Greenwood looked a lot better on the ball than he has recently. Precise passing gave United front foot on number of occasions.

He had a great chance but keeper saved it well. Followed it up with a great run to put United in a good position.

There was a sense a goal was coming from Greenwood as he fired the ball again but it went just wide. Two more attempts came from Greenwood’s boot.

An average match for the star who didn’t make any particular errors in the first half.

He managed to make his mark in the game when he picked up a rogue pass from Sanson and assisted Fernandes’ second goal.

He scored as he took a deft touch to confuse the goalkeeper who fumbled the ball. The skipper led from the front and made an impact when he needed to.

Early in the second half he received a yellow card for a risky foul.

But he scored an absolute beauty to double the lead and seal the win.

A quiet first half for the defender with not a lot of attack from Villa for him to deal with. Cleared a ball to calm waters as Villa’s attack ramped up towards the end of the first half.

Failed to defend the second Villa goal by completely missed the clear out.

Defended well and won a free kick after being fouled by Digne.

He looked relieved with De Gea saved Buendia’s shot in the second half as the Villa player ran around him to get his position to shoot.

Almost got a goal but couldn’t get a touch on the ball. He was down for a while with an injury which caused concern but he was able to carry on.

A mistake in the midfield from Cavani saw Watkins get a strike at goal.

Telles had a good game considering his got the nod as Luke Shaw was suspended. He tried a clever free kick but Watkins dealt well. Helped to bamboozle the keeper for the opening goal.

Crossed the ball in which almost led to another goal.

Matic wrestled possession back to snuff out Villa attack play but received a yellow card for a foul on Ings, gives away a free kick.

Not much action in the second half with is name hardly mentioned.

Elanga was impressive in a starting shirt. He won a free kick and played a clever pass to continue United’s good start.

Almost got a head to a chance and out ran Cash. Elanga added to his great start with a a good run into the box. He was shoved to the floor but it was checked with VAR and no penalty was given.

He then got a fantastic strike on target early in the second half.

Everton striker Dominic Calvert-Lewin has revealed he “endured some of the most difficult times” of his career and life this season and said “talking saved my life”.The England international struggled with injuries in the 2021-22 campaign and his club narrowly avoided Premier League relegation.He shared the news on social media, urging young people not to suppress emotions. View this post on Instagram A post shared by Dominic Calvert-Lewin (@domcalvertlewin)“On a personal note I have had to dig deep within myself at times...
PREMIER LEAGUE・4 HOURS AGO