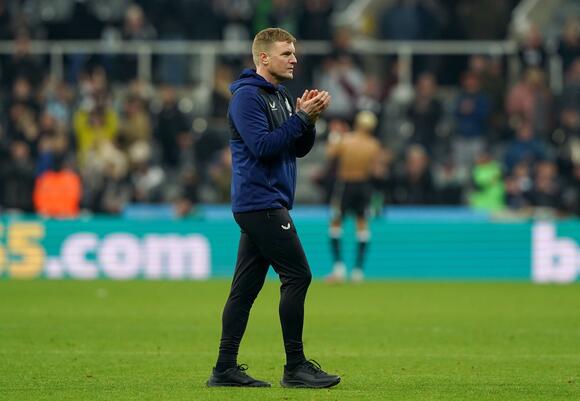 Newcastle boss Eddie Howe is refusing to throw in the towel after seeing his side squander two priceless points in their quest for Premier League survival.

Allan Saint-Maximin’s second-half strike had taken the Magpies to within three minutes of just their second win of the campaign, which would have lifted them out of the bottom three, but they succumbed to Joao Pedro’s late equaliser as Watford snatched a 1-1 draw to leave them still deep in trouble.

However, Howe said: “We saw today as a huge opportunity and that’s why it hurts so much. We were really pleased with what we saw up until half-time, so that gave us even more optimism that we could go on and win this match.

“But we have to understand the players’ mentality at this moment in time, maybe not thinking the same way, so that’s something we can change.

“There are a lot of twists and turns to come. We still believe in ourselves and the players, but obviously we know that every game gets more and more important.”

Newcastle had the better of a goalless first half and got their reward four minutes after the restart when Saint-Maximin robbed full-back Jeremy Ngakia and cut inside before blasting a shot past keeper Ben Foster.

However as time ran down, they retreated further and further towards their own goal and ultimately paid the price when Pedro got between Jamaal Lascelles and Kieran Trippier to send a fine header past Martin Dubravka.

The Magpies, who had briefly climbed out of the bottom three at Watford’s expense, slipped back into it and, while they remain only two points from safety, their inability to defend leads – they have have now dropped 21 points from winning positions this season – does not augur well for what remains of the campaign.

“I think it’s a case of trying to help the players understand why we didn’t win and then showing them and doing the work on the training pitch. I think that’s the only process that’s going to work.”

Watford boss Claudio Ranieri whose side had lost their six previous league games, felt a point was the least they deserved.

Ranieri said: “Of course, I want more from my players because I know what they can do. I’m happy, but half and half because I want more.

“The first half, we were waiting – I wanted more. They can do more. I can understand after six matches losing, maybe they were a little more anxious, but I hope this point will give them more electricity, more confidence, more belief in ourselves.”

Frank Lampard has insisted Everton are not a dirty team, despite the club getting the most red cards in the Premier League during his reign.Everton have had five players sent off since Lampard’s appointment in January and were reduced to nine men in Sunday’s 3-2 defeat by Brentford when Jarrad Branthwaite and Salomon Rondon got their marching orders.Jonjoe Kenny, Allan and Michael Keane have also seen red in recent weeks but while Lampard accepted Rondon was guilty of a poor tackle, he attributed the others to “footballing mistakes.”Their relegation rivals Leeds have had Luke Ayling and Dan James given straight...
PREMIER LEAGUE・5 HOURS AGO
The Independent

Thomas Tuchel admitted Chelsea are “still in talks” on Cesar Azpilicueta’s future, with Barcelona upholding interest in the Stamford Bridge skipper.Azpilicueta triggered an automatic, appearance-related one-year extension to his contract at the end of March, thwarting Barcelona’s chances of recruiting the 32-year-old on a free transfer.Tuchel at the time praised the importance of that extension, given Azpilicueta’s experience and influence at the west London club.I wish I could write to you after having added another trophy for our club last Saturday, but unfortunately it was not possible. I felt confident to take on the responsibility in the penalti shootout and...
PREMIER LEAGUE・5 HOURS AGO
The Independent

Eddie Howe has revealed one of the hardest parts of being Newcastle manager is having to say goodbye to his children.The 44-year-old father of three has spent the last seven months combining his parental duties with the task of keeping the Magpies in the Premier League with the latter objective having been accomplished handsomely and to popular acclaim.Howe, who replaced Steve Bruce at the St James’ Park helm in November last year, has commuted between the north-east and his home in Dorset, where his wife Vicki and their three sons, aged 10, seven and three, have remained amid the search...
PREMIER LEAGUE・4 HOURS AGO
The Independent

Crystal Palace manager Patrick Vieira has promised to seek talks with midfielder Cheikhou Kouyate over the reason behind his messages of support on social media to compatriot Idrissa Gueye.Gueye has come under fire after he failed to feature in Paris St Germain’s 4-0 win over Montpellier on Saturday, which was the weekend Ligue 1 had chosen for its clubs to show solidarity ahead of International Day Against Homophobia, Biphobia and Transphobia this week.The French side wore rainbow-coloured numbers to show their support for the LGBTQ+ community but Gueye was absent for “personal reasons” having also missed the corresponding fixture last year.Kouyate...
PREMIER LEAGUE・3 HOURS AGO

Rangers suffered penalty shootout heartache in Seville as Eintracht Frankfurt came from behind to win the Europa League.Joe Aribo put the Rangers fans in dreamland when he slotted home following a slip in the German side’s defence in the 57th minute.Frankfurt levelled 12 minutes later when Rafael Borre knocked the ball home from close range following a low cross.Gers finished extra-time strongly and Ryan Kent was denied at close range before Steven Davis had a shot cleared off the line, while James Tavernier had a free-kick saved in stoppage-time of the 1-1 draw.Aaron Ramsey, a 117th-minute substitute, saw his spot-kick saved and Borre netted to seal a 5-4 shootout win. Read More Live updates: PM ‘dithering’ on windfall tax, says StarmerBrexit has increased risk of danger foods reaching UK, watchdog warns
SPORTS・4 HOURS AGO
The Independent

For weeks, Seville had been the destination for Rangers’ European journey and it was here at the Ramon Sanchez Pizjuan where it came to a sudden and crushing end. Joe Aribo’s second-half finish had put Rangers within touching distance of a first European trophy in 50 years, but Eintracht Frankfurt equalised, took it to penalties and it was there where this once-in-a-generation final went in the way of the German side.Ryan Kent had the chance to win it in the dying seconds of extra time, the opportunity to claim the Europa League there for the taking. He was denied by...
SOCCER・3 HOURS AGO