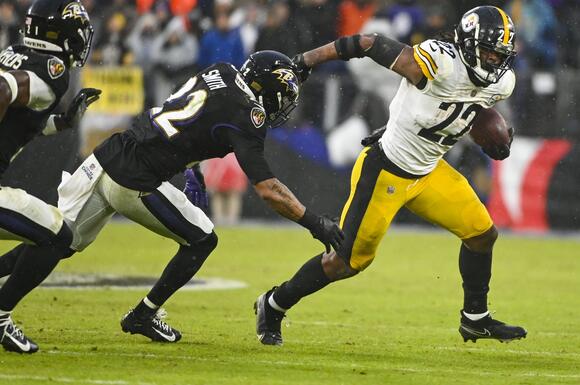 When Najee Harris hurt his elbow early on in Baltimore there was obvious concern. Even after he returned in the fourth quarter and was instrumental in the Steelers’ come-from-behind overtime victory, there was still plenty of concern since there was no guarantee Harris would be able play in the Wild Card game.

The adrenaline (and whatever else it was) that helped him get through the Ravens game would wear off, the elbow could swell up and a more serious injury might materialize. So that concerned lingered when Najee didn’t practice Wednesday or Thursday

“I’d be naïve to say it wasn’t (a concern); he’s a special player for us,” Offensive Coordinator Matt Canada said Thursday. “Obviously, I want him to be at full strength. Until we get to Sunday we don’t how things are going to play out at every position.”

Mike Tomlin had said Friday would be telling and what Friday said was that he was a full participant. Saturday afternoon the Steelers removed him from any injury question.

“The elbow’s doing good,” he said after Friday’s workout at Heinz Field. “I got a little PRP shot in it so it was sore for a couple days but it’s feeling better.”

While Harris hasn’t had to make a habit of it, he has had to play through some degree of pain in the past. “This is the first time in the league but it’s not the first time even for me getting hurt so it’s not anything new,” he said. “In this sport, there’s so much contact so you can’t say ‘I want to play different.’”

“You can’t do that especially at the running back position, it’s already a physical position,” he continued. “You just got to have in your mind that obviously you’re somewhat hurt (so) also protect yourself but still play the game the way you play it.”

Once he returned in Baltimore, that’s exactly what Harris did, even if he did take a bit of a chance. “I tried to put this brace on me but I can’t play with a brace,” he explained, “cause I can’t really fold my arm for ball security so I (had them) put some tape on it and I got back in there.”

Ad proceeded do what Canada needed to win the game and get into the playoffs. “He made a one-handed catch and really, really couple of big run,” the OC marveled. “So I think he was really effective when he came back and (that) certainly says a lot about him as a person and how much of a team player he is and how much he wants to win. He loves to compete and loves to win.”

If the Steelers are to win in Kansas City, Najee Harris will have to be a big part of it.

Hoke: Steelers would be 4-0 with a healthy T.J. Watt

Former Steelers defensive lineman Chris Hoke isn’t saying the current team is great, but he believe they have the “pieces in place to be great.” The Steelers are currently 1-3 and in real trouble of going 1-4.
PITTSBURGH, PA・42 MINUTES AGO
93.7 The Fan

Von Miller makes Chuks sound like the best RT ever

Speaking to the media this week before the Steelers visit Buffalo to take on the Bills, Miller was talking about rookie quarterback Kenny Pickett when he mentioned the offense line.
PITTSBURGH, PA・2 HOURS AGO
93.7 The Fan

Miller was livestreaming on Wednesday night when he came across a tweet from 93.7 The Fan’s Josh Rowntree that quoted Pickett saying “Everyone thinks we’re underdogs. But we don’t.”
PITTSBURGH, PA・4 HOURS AGO
93.7 The Fan

What Steelers Offensive Coordinator Matt Canada said about the play calling this week and what he said about Kenny Pickett making his 1st NFL start
PITTSBURGH, PA・3 HOURS AGO

The Kenny Pickett era has begun in Pittsburgh and the 24-year-old first-round pick is being thrown right into the fire. Pro Football Focus says the Steelers have the hardest remaining strength of schedule in the league.
PITTSBURGH, PA・1 DAY AGO
93.7 The Fan

Pirates did the right thing honoring Molina and Pujols

On the one hand, I can’t stand the St. Louis Cardinals. During the 2013-2015 run for the Pirates, it was the Cardinals who prevented the Bucs from advancing to the NLCS.
PITTSBURGH, PA・1 DAY AGO
93.7 The Fan

Tomlin considered going back to Trubisky, not all his fault

Mike Tomlin said he’s sensitive to Mitch Trubisky’s situation, thought about starting him this week-his message about the decision to go with Kenny Pickett
PITTSBURGH, PA・1 DAY AGO
93.7 The Fan

Steelers coach Mike Tomin isn’t too high on his punt returner Gunner Olszewski. Olszewski fumbled against the New England Patriots, one that contributed to the Steelers losing.
PITTSBURGH, PA・2 DAYS AGO

Steelers set have Pickett take over as QB1

According to Ian Rappaport from NFL Network, the Steelers have decided to move forward with Kenny Pickett taking the reins from Mitch Trubisky.
PITTSBURGH, PA・2 DAYS AGO
93.7 The Fan

Pickett believes he, Steelers can succeed in Buffalo

This will be Kenny Pickett’s first career start, and it comes in about as tough of an environment as you could imagine. But the rookie feels confident in he and his teammate’s chances.
PITTSBURGH, PA・22 HOURS AGO
93.7 The Fan

It's official: It's Kenny Pickett's time

Kenny Pickett is the Steelers starting quarterback going into Week 5 against the Bill in Buffalo. The team made it official just before head coach Mike Tomlin’s weekly press conference on Tuesday.
PITTSBURGH, PA・2 DAYS AGO
93.7 The Fan

Should Steelers trade Trubisky now that it's Pickett's offense

It appears that it is Kenny Pickett’s time under center after he replaced Mitch Trubisky after halftime on Sunday against the New York Jets. Multiple reports say that the Steelers will stick with Pickett at quarterback going forward.
PITTSBURGH, PA・2 DAYS AGO

The Pitt coach who first spotted Kenny Pickett describes what he’s always been like and what you should expect from his first NFL start on Sunday
PITTSBURGH, PA・1 DAY AGO
93.7 The Fan

The Steelers are 1-3. They’re riding a three-game losing streak. They’re banged up, with the entire starting secondary appearing on the injury report this week. And now they get the Bills and Josh Allen.
PITTSBURGH, PA・3 HOURS AGO
93.7 The Fan

Sounds like Pitt star tailback could return vs. Virginia Tech

What Pitt Head Coach Pat Narduzzi had to say during his final media briefing before hosting Virginia Tech, he hinted to getting Abanikanda back
BLACKSBURG, VA・44 MINUTES AGO
93.7 The Fan

Le'Veon Bell getting back into the boxing ring against Uriah Hall

Le’Veon Bell just can’t stay away from the boxing ring; he will be taking on Uriah Hall for his second career boxing match. Bell tweeted out the confirmation that he and Hall will be battling on October 29
NFL・1 HOUR AGO
93.7 The Fan

24-year-old Oneil Cruz says he wants to hit higher than the projections show, he wants to be elite and that includes working on defense at SS
PITTSBURGH, PA・22 HOURS AGO
93.7 The Fan

Pirates take 2 out of 3 from the Cardinals in their final series of the season, what Derek Shelton said about the year & a potential starter for 2023
PITTSBURGH, PA・20 HOURS AGO