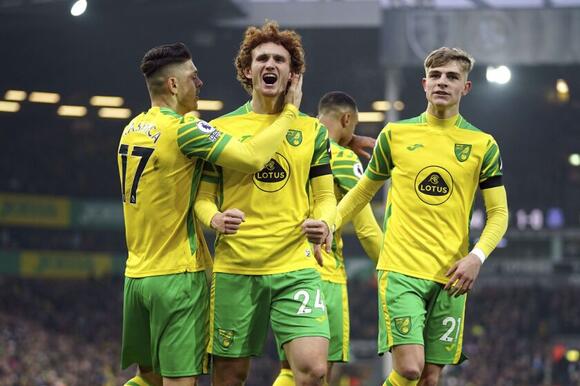 Everton supporters were calling for the Spaniard to leave the club before the game, with banners held aloft. Then two goals in quick succession — an own goal from Michael Keane and Adam Idah's close-range strike — put the home side on course for a coveted victory.

Richarlison pulled one back for the visitors shortly after coming on with an overhead kick, but the Toffees remain without a league win since the start of December.

Defeat against a Norwich team which had been on a six-match losing streak without scoring a single goal will not have eased tensions between the manager and fans, one of whom ran onto the field in the first half at Carrow Road and was making his way toward Benitez before he got stopped by stewards.

“It is really disappointing because we came here thinking about the win and it is a long journey for the fans who have come to support us," Benitez said. "Everyone came here expecting us to win and we couldn’t.

“We conceded two goals through our own mistakes and that makes it a mountain to climb for us. We have to stay professional, concentrate on the next training session and match.”

It was Norwich’s first victory in the top flight since Nov. 20 when Southampton was beaten 2-1. It lifted the team off the bottom of the standings and into 18th place, although Newcastle and Burnley have games in hand over the Canaries.

Keane tapped the ball past his own goalkeeper, Jordan Pickford, from Josh Sargent's cross in the 16th to gift Norwich its first goal since November.

Less than two minutes later, Idah was played in by Brandon Williams and poked the ball home.

Benitez’s substitutions looked to have made the difference for the visitors when they reduced the deficit in the 60th minute through Richarlison, just six minutes after he was brought on.

Rangers and Eintracht Frankfurt meet in the Europa League final on Wednesday, with the winner ending a decades-long title drought in European soccer
SAN DIEGO, CA・5 HOURS AGO