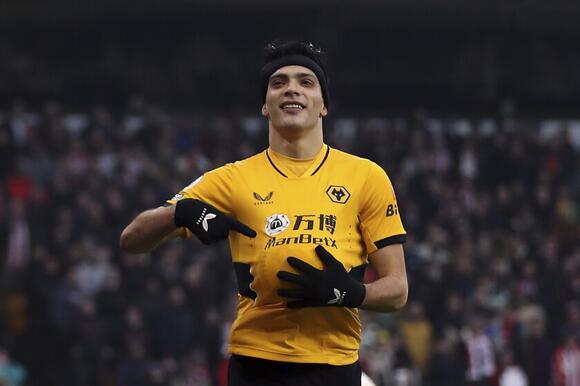 Adama Traore scored his first goal of the season and Wolverhampton survived a late rally to beat Southampton 3-1 in the English Premier League on Saturday.

Raul Jimenez converted a penalty in the 37th minute and captain Conor Coady headed home in the 59th before a nervy finish at Molineux Stadium.

With Wolves seemingly in control, Southampton's James Ward-Prowse made it 2-1 in the 84th when he sent a powerful free kick into the top right corner from 30 yards (90 feet).

With Southampton pushing for the tying goal, Traore had plenty of space on the left wing to take a pass and beat goalkeeper Fraser Forster with a low shot into the right corner in the first minute of stoppage time.

It was Wolves' third win in their past four league games, bolstering the eighth-placed team's hopes of qualifying for a European spot.

The visitors hoped to build on their biggest win of the season, 4-1 over Brentford on Tuesday, but remain in 12th place.

MANCHESTER CITY paraded the Premier League trophy in front of their fans in the city centre after completing a miracle comeback against Aston Villa. Pep Guardiola sealed a fourth Prem trophy in the last five seasons after his side came from two goals behind to win 3-2. Matty Cash and...
PREMIER LEAGUE・15 MINUTES AGO