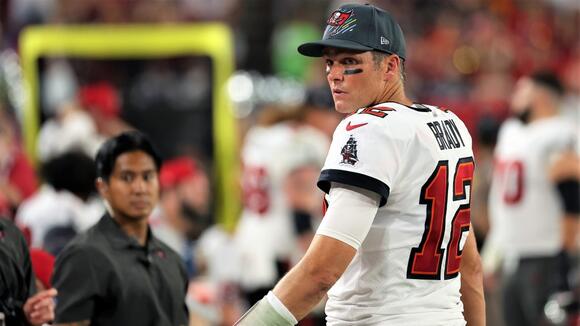 BOSTON (CBS) — Tom Brady plans to play football forever. Or so we think.

One ESPN writer — who’s spent a lot of time covering Tom Brady — thinks that the end is much closer for the 44-year-old QB.

In an article featuring playoff predictions from different ESPN analysts, writers and personalities, Wickersham shared that he’s got a feeling that this playoff run will be the final one for TB12.

“We know that the Steelers’ Ben Roethlisberger will retire. But I think Tom Brady will, too,” Wickersham said.

Wickersham couched the claim by saying it’s “just a hunch.” Still, given that Wickerhsam released a 500-plus-page book in October — a book which detailed the Patriots’ dynasty, focused significantly on Brady, and was written after conducting “hundreds of interviews” — the author’s “hunch” is enough to raise an eyebrow or two as the playoffs are set to begin.

Brady, of course, has long declared his desire to at least play to age 45, but possibly longer. At age 44, he stayed healthy for all 17 games, reaching his second-highest single-season touchdown total ever with 43. He led the league in passing touchdowns and passing yards, and his Buccaneers went 13-4, good enough to earn the No. 2 seed in the NFC as they try to become the first repeat Super Bowl champs since Brady and the Patriots did that in 2003 and 2004. He’ll either win the NFL MVP Award or finish second behind Aaron Rodgers.

Last offseason, Brady signed a contract extension with three voided years, essentially working to keep him under the Bucs’ employment through the 2022 season, when he’ll be 45.

Eventually , Brady will have to stop playing football. And while that date is at least a year off in most people’s minds, Wickersham at least presented the possibility that the end of Brady’s historic career could come as soon as this weekend.

Kaepernick getting first NFL workout in years with McDaniels' Raiders

BOSTON -- More than five years after throwing his last professional pass, quarterback Colin Kaepernick is getting a legitimate look from an NFL team.The Las Vegas Raiders are working out the 34-year-old QB on Wednesday, marking Kaepernick's first official team workout since he caused controversy in 2016 by taking a knee during the national anthem before games.The Raiders have traditionally been an organization unafraid to work against conventional wisdom, and owner Mark Davis has clearly adopted some of the same lines of thinking as his father, Al Davis.Likewise, Raiders head coach Josh McDaniels and general manager Dave Ziegler came up...
FOXBOROUGH, MA・1 DAY AGO
CBS Boston

BOSTON -- A little more than two months have passed since Chase Winovich was sent by the New England Patriots to the Cleveland Browns, in a one-for-one exchange for linebacker Mack Wilson. The fourth-year edge rusher has apparently used that time to turn into a different person.Now in Cleveland, Winovich looks like someone making a fresh start. He is sporting a new jersey number -- No. 69 -- and an entirely different look up top. The trademark long blonde locks flowing atop Winovich are gone, giving way to a short, dark haircut.Allegedly, this is the same person.Winovich has had the...
CLEVELAND, OH・2 DAYS AGO
CBS Boston

BOSTON -- The story of the Bill Belichick era in New England will obviously be defined by the six Super Bowl banners hanging in the south end zone of Gillette Stadium. No matter what happens in the future, those championships will stand forever. Alas, nothing in the NFL lasts forever ... or for very long. Change is always the name of the game, and that's always evident in the roster turnover from year to year across the league. The Patriots -- even during their best days -- were never exempt from that reality.Now three full seasons removed from their last Super...
FOXBOROUGH, MA・2 DAYS AGO
CBS Boston

BOSTON -- Celtics fans have long known that Jayson Tatum is one of the best young stars in the NBA. A new milestone reached on Wednesday night may help illustrate that reality to the rest of the basketball world.With a 22-point night in the Celtics' Game 5 win over the Heat, Tatum topped 1,500 playoff points for his career, officially getting to 1,508 points in 66 games played.With Tatum being 24 years old and 83 days when reaching that 1,500-point milestone, he became the second-youngest player to ever hit that mark.The only player to reach 1,500 points at a younger...
BOSTON, MA・23 HOURS AGO

Tatum shakes off rough start and shoulder issue in Game 5

BOSTON -- Jayson Tatum had a horrid start to Game 5 of the Eastern Conference Finals against the Heat, and for a while, it looked the Celtics' star may be dealing with a shoulder injury.It's the playoffs, so no one is completely healthy. But Tatum was clearly bothered by his right shoulder in the early goings of Game 5.He grabbed the shoulder early in the game after being bumped by Kyle Lowry, the same shoulder that he suffered a stinger in late in Game 3. He grabbed it again after he was whistled for an offensive foul on a drive...
BOSTON, MA・1 DAY AGO
CBS Boston

BOSTON -- We're once again playing the waiting game with a pair of Celtics players and their status for Wednesday night's Game 5 against the Miami Heat. Marcus Smart and Robert Williams are both listed as questionable for the playoff tilt.Celtics head coach Ime Udoka said that both players are feeling better after the team's morning shootaround, but they both remain game-time decisions. They'll test out their injuries ahead of tipoff before their status is determined.Smart is still dealing with a right ankle sprain that he suffered in Game 3, which caused him to sit out Monday night's Game 4...
BOSTON, MA・1 DAY AGO
CBS Boston

BOSTON -- Jayson Tatum is honored -- "obviously" -- to be a member of this year's All-NBA First Team. But he still feels the system for determining that group could use some adjustments.Speaking in Miami a day after being named as one of the very best players in the league, Tatum couldn't help but find it odd that Joel Embiid ended up on the All-NBA Second Team."I mean -- there just should be some, you know, rules in place," Tatum said. "I think, I don't know exactly the number, but maybe you should have to play a certain amount of...
BOSTON, MA・1 DAY AGO