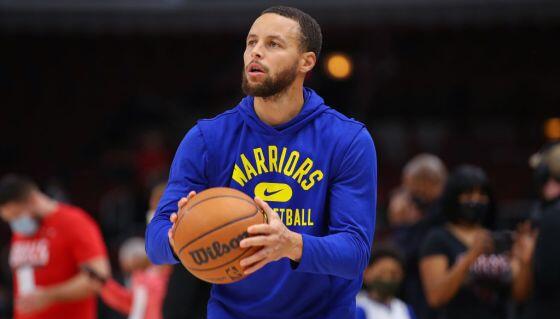 G olden State Warriors guard Steph Curry is widely considered the greatest shooter in the history of the league and he has the numbers to back that argument up. The 33-year-old NBA champ is now aiming for another high mark away from the hardwood, too. Curry is reportedly targeting an eight-figure deal with regard to his new literary project, according to Page Six .

“It’s a photo book and a memoir by Stephen,” an unnamed source told the outlet. “Publishers are being asked to pay $10 million, and I bet one might.” The working title is allegedly Master of 3’s , a reference to how the pro baller made his bones and changed how basketball is played.

There already are a few biographies written about Curry and other books detailing his impact on sports, but this will be the first time his name occupies a byline. Curry will likely have some strong help from his wife Ayesha when it comes to his inaugural work, though. Mrs. Curry is a New York Times bestselling author with a pair of cookbooks to her name, and she has her own widely available lifestyle magazine called Sweet July .

Steph Curry has always been an avid fan of reading, however. Two years ago, he launched his book club, Underrated , in conjunction with the Austin, TX-based startup Literati . As a Literati “luminary,” Curry is one of a select number of celebs tapped to suggest a new book every month to his club followers. The theme of Underrated is to share stories of various overcomers throughout history, particularly in sports and social justice.

“I wouldn’t say I’m starting this trend, but I think I’m trying to approach it in a unique way that allows people to engage and have thoughtful takeaways from each book I choose,” Curry told the Washington Post in 2020.

At the time, he did hint at the possibility of adding the title of “author” to his list of other achievements. “Eventually, I’ll write one about myself and talk about all the craziness of the on- and off-court successes, failures, all the above, but not anytime soon,” he later said to WP . Well, it looks like now is his time.

Draymond Green and his post-game comments were fresh on the minds of the Maimi Heat Friday night (May.27).  If the Miami Heat needed any motivation going into their Game 6 elimination game against the Boston Celtics, they had to look no further than sports talk shows and arguably the loudest voice in the NBA, Draymond […]
BOSTON, MA・18 HOURS AGO
fadeawayworld.net

Dennis Rodman and Madonna had a short-lived but entertaining relationship that came with many problems for their popularity. Dennis was one of the most famous NBA players in the 90s, even competing with Chicago Bulls teammates, Michael Jordan and Scottie Pippen. Over the years, Rodman dated gorgeous women, putting together...
CELEBRITIES・1 DAY AGO
fadeawayworld.net

Shaquille O'Neal and Charles Barkley keep demonstrating why they are two of the most entertaining NBA analysts out there. The duo just wrapped up another season full of laughs, heated moments and entertaining debates, and it seemed like Shaq wanted to go in a big fashion. On Thursday night, the...
NBA・1 DAY AGO

It’s understood that a man’s barber is one of the more important relationships in his life, just below parents, children, and significant others. Gillette Barber Council members and celebrity barbers Vince Garcia and Ray Santos are familiar with this important dynamic and how it only helps to keep their clientele looking fresh. Garcia and Santos recently […]
CELEBRITIES・9 DAYS AGO
Cassius

We're looking forward to the PEs.
WASHINGTON, DC・1 DAY AGO