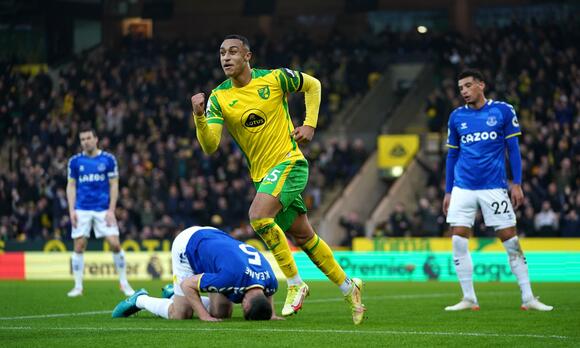 Grey suit, grey demeanour, grey football. Rafael Benítez looked a haunted man and with the travelling support voluminous in their discontent, it is hard to see where the Everton manager goes from here.

His side deserved to lose to a Norwich team who somehow found the strength of character and the quality of play to put an end to a run of six defeats and no goals and claim three vital points in their fight against relegation.

Everton, meanwhile, are increasingly being drawn into a dogfight and while Benítez pointed to returning players and an improved second half performance, the fans who unfurled banners at full time calling for his dismissal and that of the Goodison board did not appear to agree.

“I am a professional and I have enough experience and I came here to fix issues of the last five years”, said Benítez of his ability to deal with the pressure that is on his shoulders.

He has managed five games fewer than Sam Allardyce, once seen as the modern nadir by Everton fans, but his win percentage is some way short of Big Sam’s – 26% to 38% – with Benítez’s record currently the worst of a permanent manager since Howard Kendall’s ill-feted return to the club.

“It’s not in my hands,” said Benítez of his future as he lamented the mistakes that “are costing us goals and points each week”.

There were many in this match, the first most costly being the toe-poke by Michael Keane that gave Norwich the lead in the 16th minute.

Directly from the restart came the second, as Anthony Gordon coughed up possession to Brandon Williams who stormed up the pitch and slipped in Adam Idah for the Republic of Ireland international to score his first Premier League goal.

Benítez was able to welcome Yerry Mina and Richarlison back to the squad and put them swiftly on the pitch in the second half, with both having an effect on the game and a hand in Everton’s only goal.

Mina unsettled Tim Krul under a driven cross, and Richarlison capitalised on the Norwich keeper’s soft punch to sweep a perfect overhead kick into the net.

Everton had the better of the play in the second half, but not to the extent to which Norwich dominated the first and, as odd as it must have been for Canaries fans to experience, the hosts managed the game well to claim victory.

The experience of Krul and Grant Hanley was central to the resolute defence but Norwich also offered a cutting edge going forward, something that has been the case for very short periods this season. Part of this could be attributed to Dean Smith’s brave decision to switch to a 4-4-2 formation, the rest to the performance of Idah, who is emerging as a threat just when his team need him.

“We’re still finding out what kind of player he is”, Smith said of the 20-year-old. “He’s physically strong and he’s just starting to learn how to use his body to make use of that. He’s got a great touch, he can finish and his first Premier League goal was well deserved today. He’s got an awful lot of potential and it’s our job to get it out of him.” Norwich have moved off the bottom of the table and are at their highest point in the football pyramid since November 2019. One point and a terrible goal difference separate them from Watford and safety, with the Hornets Norwich’s next opponents on Friday night.

“I’m really proud of the players because they gave it everything today,” Smith said. “I said to them before the game, ‘It’s not the be all and end all game but we are getting that way’ and it was time for actions rather than words.

“We wanted to get our fans behind us by putting in a performance and showing the energy and verve that we needed and we did that. The glass of red wine after the match hasn’t tasted sweet for a while. It will taste certainly sweeter tonight.”

Kylian Mbappé missed a penalty and limped off injured as PSG beat Montpellier, while Barcelona went eight points clear at top of La Liga with a win at Real Betis
2 HOURS AGO
The Guardian

Celtic showed no signs of letting up in the title race as they brushed aside Livingston 3-0 in a one-sided Parkhead encounter. Greg Taylor eventually breached a resolute Livi defence in the 29th minute with a thunderous drive and three minutes later Daizen Maeda rather fortuitously added a second. His fellow Japan international Kyogo Furuhashi struck on the counter just before the break with his 21st goal of the season and perhaps surprisingly that was the end of the scoring.
3 HOURS AGO
The Guardian

Minute-by-minute report: Forest passed up a couple of first-half chances but otherwise United were never in trouble as they made the final as expected. Scott Murray was watching.
2 HOURS AGO
The Guardian

MPs urge football clubs to back fan recommendations over sustainability

A group of 10 local MPs have urged Liverpool and Everton to back the recommendations of the fan-led review and support the introduction of new sustainability criteria for clubs. The fan-led review issued its recommendations to government in November 2021, with the introduction of an independent regulator underpinned by statute...
54 MINUTES AGO
The Guardian

Recently, I stood on a raised court podium being cross-examined by a roomful of barristers. I was there as an “expert witness” to the case in hand – a group of young Black men from a small English city charged with conspiracy to possess a firearm – which mostly involved commenting on the extensive use of rap lyrics as evidence.
1 DAY AGO
The Guardian

When I was a child, and friends asked me what I would do if I ever met my dad, I always replied that if I had a gun I would shoot him. I was a young teen in a small east Yorkshire market town with, at best, minor connections to a burgeoning petty criminal underworld. Even if I had been able to get a gun, I would have been more likely to shoot off a finger in error than aim correctly at my absent father. It was an empty threat that clearly revealed a deep, simmering anger.
18 HOURS AGO
The Guardian

The enemy on the other side of the woods can be heard when the wind blows towards the deep Ukrainian trenches. Russian voices carry in the freezing cold air as do the growls of the tanks and the buzz of the kamikaze and reconnaissance drones. But that is not all...
13 HOURS AGO
The Guardian

It was the most pivotal of moments. Tied game. Seventeen seconds left. The Kansas City Chiefs with a 3rd and 4 on the Cincinnati Bengals’ 47 in the AFC title game. In preordained fashion, it was Patrick Mahomes who willed his injured leg to join his healthy one and gain just enough yardage to eke out a first down. And then Mahomes was hit out of bounds by Bengals defensive end Joseph Ossai who, up until that gaffe, had played a tremendous game. The extra 15 yards given for the unnecessary roughness penalty was just enough for Harrison Butker to nail the 45-yard field goal and send the Chiefs to their third Super Bowl in four years and further cement Mahomes’s legend.
CINCINNATI, OH・2 DAYS AGO
The Guardian

To Leslie is a sad, sweet country song of a movie, with a steel-guitar twang of love and loss. Screenwriter Ryan Binaco was inspired by his own mother for this film, conjuring her memory in the spirit of Barbara Loden’s Wanda (1970) or maybe Scorsese’s Alice Doesn’t Live Here Anymore (1974). Better Call Saul producer Michael Morris makes his feature directing debut. The film is ultimately just a little contrived and its final scene is not entirely plausible, but the drama is always fiercely watchable due to an undoubtedly marvellous performance from Andrea Riseborough – who last week put this little-seen indie picture back into the conversation and made industry headlines with her sensational outsider breakthrough into the Academy Awards best actress nomination list.
TEXAS STATE・2 DAYS AGO
The Guardian

From monogrammed luggage to unerring faith, a sale of Talley’s belongings shows the caring, complicated man behind the unforgettable image
NEW YORK CITY, NY・19 HOURS AGO