Joe Biden promised to unify us, and he has. Most voters agree that they don't like him

Year One of the Biden presidency was a mixed bag. From COVID-19 to Afghanistan to the economy, Joe’s had a rocky start. Still, he’s delivered big on one promise.

In his inaugural address , Biden said, “Today, on this January day, my whole soul is in this: Bringing America together. Uniting our people. And uniting our nation.”

Boy, has he delivered. Across dividing lines of age, race and gender, the country is united on one point: Nobody likes Joe Biden.

The Quinnipiac Poll released on Wednesday provided the latest evidence. Just 33% of Americans approve of the president’s job so far, with 53% disapproving. Since November, his approval dropped 3 percentage points, all coming from those who held no opinion two months ago.

It’s the lowest approval of his presidency. At least so far.

The most striking part of the poll is the demographic breakdown. Biden’s approval ratings are lower with Hispanic voters (28%) than white voters (32%), a fact sure to set off alarm bells among Democratic strategists.

The only positive marks come from Democrats (75% approval) and Black voters (57%), but those are pretty low, historically speaking. Among the crucial independent vote, only 25% like the guy.

“I ask every American to join me in this cause,” Biden said on that cold day last January, “uniting to fight the common foes we face.”

He didn’t realize the common foe would be him.

COVID-19, the economy have voters in a sour mood 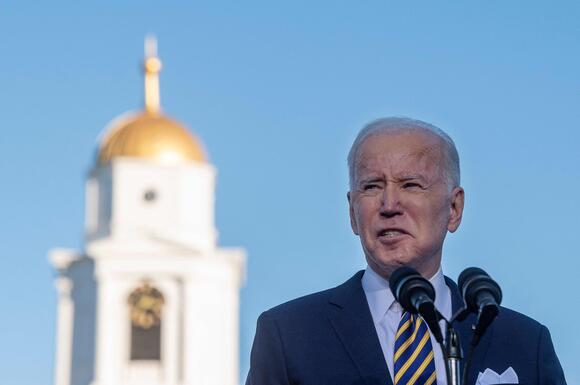 Breaking down the results further shows a country in a sour mood. Biden’s handling of COVID-19 is upside-down by 16 percentage points. His campaign promise to “shut down the virus, not the country” backfired in a big way.

The president’s management of the economy is worse still, underwater by 23 percentage points. The same day the poll was released, inflation hit the highest level since 1982. His only plan to fix the economy is to borrow and spend trillions more, deepening our nearly $30 trillion debt. Earlier this week, “Bare Shelves Biden” trended on Twitter as more shortages hit the east coast.

It’s gotten so bad for the president that several pundits have floated the idea of – you won’t believe this – Hillary Clinton running in 2024. The woman who lost to Barack Obama and Donald Trump is the 74-year-old fresh face that will surely lead her party to victory. What could go wrong?

A shouty speech on voting didn't help. Or did it?

In the past, when a president’s polls were sinking, they readjusted. Well, every president before the last guy. But Biden has only accelerated his unpopular policies. He spent December propping up his doomed Build Back Better boondoggle. This month, it’s his doomed voting rights legislation.

For the latter, he worked his unifying charm with a shouty speech in Georgia .

Both Republican Sen. Mitch McConnell and Democratic Sen. Dick Durbin criticized his remarks. And those two don’t agree on anything.

“I know speaking of unity can sound to some like a foolish fantasy,” Biden said in his inaugural address.

But you did it, Joe. Unity at last.

Jon Gabriel, a Mesa resident, is editor-in-chief of Ricochet.com and a contributor to The Republic and azcentral.com. Follow him on Twitter at @exjon .

This article originally appeared on Arizona Republic: Joe Biden promised to unify us, and he has. Most voters agree that they don't like him

He has decided this country and continues to try. He is horrible and doesn't care about the American people. he tells poc they aren't black if they don't vote for him. He wants people to disregard the judicial system and our Constitution. He tried to pass discriminatory measures in his aid package. This man cares nothing about American nor does our Vp wherever tou may find her. she can't even run her own office. I just hope that the house and senate are turned in 2022 or we may not still have a country. Biden has destroyed so much in less than a year. sad!

he will unify us all into welfare and into government food lines. it's the communist way after all.

Harvard polled Americans under 30 who are likely to vote in the midterms and found 85% of them want some government action on student loan debt.
PRESIDENTIAL ELECTION・29 DAYS AGO
Fox News

International order will be thrown out the window if Russia is able to escape consequences over its invasion of Ukraine, US Gen. Mark Milley told CNN.
POLITICS・28 DAYS AGO
People

"I'm very excited to finally tell my story," Kellyanne Conway said Monday during an interview with PEOPLE before the release of her memoir, Here's the Deal, out now. That story begins in a small town in southern New Jersey and follows Conway to Washington D.C., where a hard-earned career as a pollster and political consultant led to historic achievement as the first woman to run a successful presidential campaign when she helped elect Donald Trump in 2016 and served in his White House as senior counselor to the president.
RELATIONSHIPS・17 HOURS AGO

Former Trump lawyer Michael Cohen threw his former boss under the bus on Monday, appearing to contradict claims that the former president does not possess the documents New York Attorney General Letitia James is after.
POTUS・28 DAYS AGO
Business Insider

Greene testified on Friday that she didn't recall whether she asked Trump to invoke military rule, despite telling Meadows to relay the idea to Trump.
ATLANTA, GA・29 DAYS AGO
The Independent

Vladimir Putin is so popular in Russia that he has the “political space” to withdraw his forces from Ukraine, said Boris Johnson.The prime minister said the Russian president still has “massive backing” from his own people despite international outrage over the invasion.“The Russian public overwhelming back Putin,” Mr Johnson told Talk TV. “Therefore he has the political margin for manoeuvre from within Russia … Putin has far more political space to back down, to withdraw.”The PM added: “There could come a point when he could say to the Russian people, ‘The military-technical operation that we launched in Ukraine has...
POLITICS・28 DAYS AGO

In the hours after the riot, McConnell spoke briefly about his intentions to quash Trump's influence within the GOP.
CONGRESS & COURTS・29 DAYS AGO
americanmilitarynews.com

The intelligence the U.S. shared with Ukraine helped it continue to resist Russian invading forces and even shoot down a transport plane carrying hundreds of Russian troops, a new report revealed. According to current and former U.S. officials who spoke with NBC News on Tuesday, the U.S. provided critical intelligence...
MILITARY・28 DAYS AGO
97.1 FM Talk

In an interview with Russian TV, Sergei Lavrov said that Russia is essentially at war with NATO. This rhetoric has some worried that Russia may use nuclear weapons in Ukraine. Lt. Col. Dakota Wood weighed in on the likelihood of this happening.
POLITICS・28 DAYS AGO

Sign up for the Fortune Features email list so you don’t miss our biggest features, exclusive interviews, and investigations. Reports that Twitter’s board could come to a deal with Elon Musk as early as Monday are raising red flags among media watchdog groups. On Monday, Media Matters, a...
PRESIDENTIAL ELECTION・29 DAYS AGO
Business Insider

Individual judges may not like the policy choices of the Biden administration, but it is not their job to weigh in on that policy debate.
TEXAS STATE・29 DAYS AGO
USA TODAY

Former Secretary of State Henry Kissinger said Ukraine should give up its occupied territory and the West ought no try to crush Russia in the war.
ECONOMY・35 MINUTES AGO