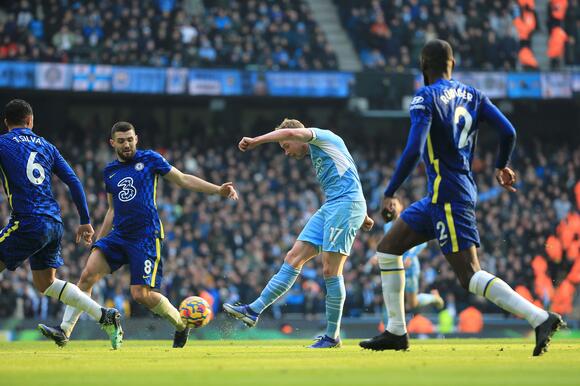 Follow live reaction after Manchester City increased their lead at the top of the Premier League table to 13 points as Kevin De Bruyne’s sublime strike earned the defending champions a 1-0 win over second-placed Chelsea .

De Bruyne curled an excellent strike past Kepa Arrizabalaga from outside of the box in the 70th minute to hand the hosts a victory they thoroughly deserved after a commanding performance against the European champions.

City dominated possession in the first half but Jack Grealish was denied an opening goal when Kepa blocked his shot with an outstretched leg. Romelu Lukaku, who had a poor game for the visitors, went close after the break but saw a curling effort saved by Ederson.

Chelsea continued to struggle to create chances, despite the introduction of Mason Mount and Timo Werner from the bench, and the defeat is a significant blow to their hopes of challenging for the title.

Follow all the reaction to Man City vs Chelsea below:

What the papers sayNewcastle are lining up potential transfers and have their eye on 25-year-old Leeds winger Jack Harrison and Lille’s 22-year-old centre back Sven Botman, according to The Daily Telegraph.The same paper reports Chelsea boss Thomas Tuchel will have £200million to spend in the summer following confirmation of the club’s new ownership.And Tuchel has an eight-player shortlist to use up the cash, including 23-year-old Sevilla defender Jules Kounde and 20-year-old RB Leipzig centre-half Josko Gvardiol.Aston Villa have joined those vying for Burnley centre-half James Tarkowski, according to The Times. The 29-year-old is available on a free transfer and has...
PREMIER LEAGUE・3 HOURS AGO
The Independent

Arsenal midfielder Mohamed Elneny has signed a contract extension with the Premier League club.Egypt international Elneny has scored five goals in 147 appearances since arriving at Emirates Stadium from Swiss club Basel in 2016.The length of the 29-year-old’s new deal has not been disclosed by the Gunners.Manager Mikel Arteta told the club website: “Mo is a really important part of the team. He brings endless energy, enthusiasm and commitment to the team and is loved by everyone.“He’s an important player for us on and off the pitch, a real role model to our younger players and I’m delighted he’s staying.”Elneny...
PREMIER LEAGUE・1 HOUR AGO
The Independent

Liverpool boss Jurgen Klopp has been named League Managers’ Association Manager of the Year and also collected the Premier League award at a gala dinner in London on Tuesday evening.The Reds won both the Carabao Cup and FA Cup after beating Chelsea following a penalty shoot-out at Wembley on each occasion – but saw Manchester City finish a point ahead of them to claim the Premier League title on a dramatic final day of the campaign.Liverpool will aim to add the Champions League trophy to their haul when they meet Real Madrid in Paris on Saturday.Klopp also received the LMA’s...
PREMIER LEAGUE・2 HOURS AGO