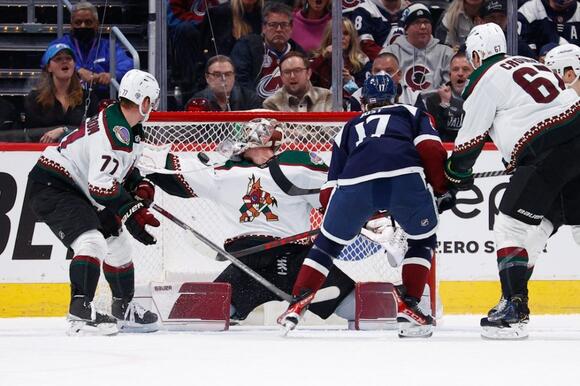 Nazem Kadri scored the only shootout goal to help the Colorado Avalanche avoid a major upset with a 4-3 win over the Arizona Coyotes in Denver on Friday night.

Andre Burakovsky had a goal and an assist, Mikko Rantanen and Tyson Jost also scored, and Devon Toews had two assists for Colorado.

Pavel Francouz stopped 23 shots through overtime and two more in the shootout to help the Avalanche win their 13th straight at home.

According to multiple sportsbooks, the Avalanche were the biggest favorite in an NHL game in nearly 20 years, closing in the neighborhood of minus-700.

Clayton Keller, Shayne Gostisbehere and Johan Larsson had goals, Phil Kessel had two assists, and Ivan Prosvetov had 44 saves and two more in the shootout for the Coyotes.

Both teams missed on their first two tries in the shootout and Francouz made a save on Nick Schmaltz on Arizona’s third attempt. That gave Kadri a chance to win it, and he did when he slid a shot between Prosvetov’s skate and the post.

Colorado went on top first when Rantanen scored his team-leading 17th goal of the season at 4:36 of the first period.

The Avalanche made it 2-0 later in the period when Jost knocked in the rebound off Kurtis MacDermid’s wraparound attempt at 12:03. It was his fifth of the season.

Colorado was poised to go ahead by three when it went on the power play late in the first but it was the Coyotes who cashed in. Keller stole a pass at the Arizona blueline and got behind Toews. His backhander from in close trickled by Francouz to make it 2-1 at 17:31 of the first.

It was Keller’s 13th of the season.

The Coyotes tied it with the only goal of the second period on Larsson’s one-timer at 6:12, his fourth of the season. Arizona had an opportunity for more when it got a full two-minute 5-on-3 but the Avalanche killed it off.

The Coyotes did go ahead in the first minute of the third when Gostisbehere scored 39 seconds into the period, his seventh of the season, to make it 3-2.

Just 29 seconds later Burakovsky beat Prosvetov with his 14th goal of the season.

The Tampa Bay Lightning can return to the Eastern Conference Finals for a third straight season with a victory against
TAMPA, FL・1 DAY AGO
Sportsnaut

Trailing 2-1 in a playoff series is not uncharted territory for the Calgary Flames. They were in this exact situation
NHL・19 HOURS AGO
Sportsnaut

On Sunday, the New York Rangers managed to find more open ice for their offense and then survived a barrage
RALEIGH, NC・23 HOURS AGO

The alternate shots on goal (SOG) market that has opened on FanDuel has really changed the way we bet on props in the NHL. Not only can you now parlay guys in the same game, but you can choose to go for one shot less than their standard overs or ladder them up for higher odds.
NHL・25 MINUTES AGO
Sportsnaut

Cardinals to be featured on in-season ‘Hard Knocks’

The Arizona Cardinals will be featured on the second installment of HBO’s “Hard Knocks In Season.” It’s the first appearance
GLENDALE, AZ・23 HOURS AGO
Sportsnaut

If recent results and the opener of a three-game series are any indication, the Pittsburgh Pirates and visiting Colorado Rockies
DENVER, CO・9 HOURS AGO

Two notable hitting streaks and a winning streak will be on the line Tuesday night when the St. Louis Cardinals
SAINT LOUIS, MO・7 HOURS AGO
Sportsnaut

If familiarity breeds contempt, the Arizona Diamondbacks and Kansas City Royals should get along just fine. The clubs will complete
KANSAS CITY, MO・6 HOURS AGO
Sportsnaut

Max Kepler continues to enhance his reputation as a Detroit Tigers killer. The Minnesota right fielder has seven homers against
DETROIT, MI・7 HOURS AGO