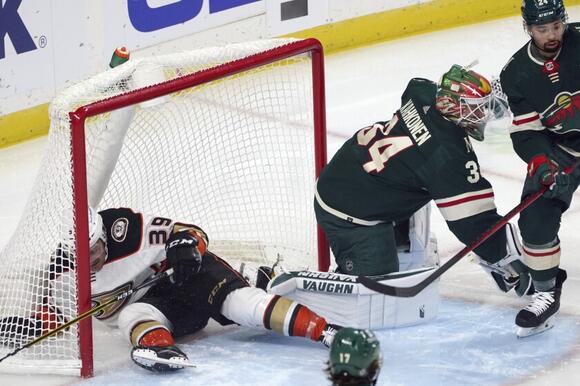 Zuccarello finished with two goals and an assist, Boldy and Ryan Hartman had one of each, and Kirill Kaprizov added two assists in his return to the lineup.

Kaapo Kahkonen made 39 saves for the rested Wild, who had six days off before winning their 10th straight against the Ducks — the longest win streak against one opponent in team history.

“Everyone wants to play games. The less you practice, the more games you play, the more fun it is,” Boldy said. “But I think we did a good job this week kind of getting what we needed to get done in practice and just going out there. Like you said, there’s an excitement, especially when you have those days off, you look forward to it even more.”

With his dad in attendance, Boldy scored on a deflection off a defender 30 seconds into the third before Zuccarello scored on a wrister from the slot to make it 4-1. The team record for fastest two goals is three seconds set by Jim Dowd and Richard Park on Jan. 21, 2004.

“I honestly just heard the goal song just continuing. The fans were rocking. It was awesome,” he said.

Anthony Stolarz made 23 saves for Anaheim but was pulled after Victor Rask made it 6-1 at 2:05 of the third.

“We can’t give up seven goals and expect to win,” Ducks coach Dallas Eakins said. “We need to be more focused.”

Minnesota showed no rust, thanks in large part to the Kaprizov-Hartman-Zuccarello line that combined for two goals and three assists in the opening period. The trio finished with seven points.

Less than 90 seconds after Kevin Fiala finished a 2-on-1 with Boldy, Zuccarello corralled a rebound of Kaprizov’s shot and fed Hartman in front for a 2-0 lead.

A shot from the right circle by Max Comtois got the Ducks within one, but Kaprizov forced a turnover in the Ducks end and blindly sent a pass to Zuccarello for a blistering one-timer from the left circle and a 3-1 lead.

“We were fortunate to get the goals today, but when you haven’t played in a while, it’s exciting to get a win here,” Zuccarello said.

Selected on Thursday to his first All-Star Game, Kaprizov has 10 points in his last five games and 31 in his past 18. The team’s top scorer returned after missing one game following a hit along the boards Jan. 6 in Boston that left him with an upper-body injury.

“That’s Kirill. He’s working hard,” Dumba said. “Once he got back into practice he was right back in the swing of things. He more than anyone else holds himself accountable and he wants to be at the best of his abilities every night.”

Anaheim played without its points leader, Troy Terry, who was placed in COVID-19 protocol Friday. He’s sixth in the NHL with 22 goals and was the only Ducks player in double digits entering the game.

Sonny Milano, tied for second on the team with nine goals, left in the first period with an upper-body injury and did not return. Eakins did not have an update.

Derek Grant and Trevor Zegras scored in the third period for Anaheim.

NOTES: Minnesota is 12-3-1 at home. … Anaheim is 2-5-1 since Christmas. … Wild D Jared Spurgeon took part in the morning skate but missed his fifth game with a lower-body injury.

Ducks: At the Chicago Blackhawks on Saturday.

Wild: At the Colorado Avalanche on Monday.

The Orlando Magic won the NBA draft lottery and landed the No. 1 overall pick for the first time since they got Dwight Howard nearly two decades ago
ORLANDO, FL・2 DAYS AGO
San Diego Union-Tribune

José Berríos and two relievers combined on a six-hitter, George Springer provided all the offense with a bases-loaded triple, and the Toronto Blue Jays beat the Seattle Mariners 3-0
SEATTLE, WA・2 DAYS AGO