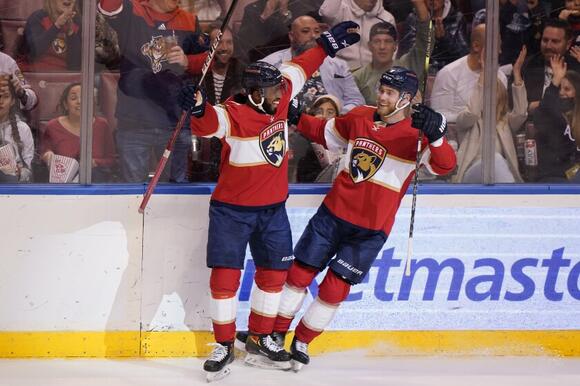 Sam Bennett scored his second hat trick this season and added an assist to lead the Florida Panthers over the Dallas Stars 7-1 on Friday night.

Jonathan Huberdeau had a goal and three assists to give him 51 points. Gustav Forsling scored his first of the season, Anthony Duclair had a goal and two assists, and Carter Verhaeghe also scored for the Panthers.

Brandon Montour had two assists, and Sergei Bobrovsky made 28 saves.

Bennett also had three goals Oct. 16 against the Islanders, the second game of the season.

The Panthers are 7-0-1 since the extended Christmas break and they improved to 20-3-0 at home.

“We want to bring an identity that this is a real hard place for teams that come in. They better be ready to play because we play really well at home,” interim coach Andrew Brunette said.

Jake Oettinger allowed four goals on 17 shots. He was replaced by Anton Khudobin with 13:57 left in the second period. Khudobin finished with 19 saves.

The Stars fell to 4-11-1 on the road, where they have only one win in regulation.

“There’s a lot (we didn’t like),” coach Rick Bowness said. “It starts with not being willing to compete.

Florida scored two goals 30 seconds apart in the second to make it 4-0. Verhaeghe put the puck over Oettinger’s glove at 5:33. Huberdeau’s shot from the slot chased Oettinger.

“We were able to get a couple of goals early and I thought we didn’t overextend ourselves,” Brunette said. “We stuck to the game plan. I really liked the way we managed the game and we were rewarded for it.”

Hintz put the Stars on the board at 1:06 of the third.

Forsling, who has 18 assists, put the Panthers ahead 3:07 in when he tapped in a pass from Bennett in front for his first goal of the season.

Duclair doubled the lead when he skated in from the right faceoff circle and poked the puck past Oettinger at 8:50 of the first.

As part of the “Tape Out Hate” campaign organized by Budweiser Canada and the Hockey Diversity Alliance, Duclair was among the players using stick tape emblazoned with messages such as “Racism Has No Place In Hockey” and “Fini Le Racism.” Duclair is of Haitian-Canadian descent and said: “We need the support of others to help make this a movement, so silence is not an option.”

NOTES: Huberdeau was selected for the NHL All-Star Game in Las Vegas on Feb. 5. He also will participate in the skills competition on Feb. 4. ... Dallas lost three overtime games to Florida last season.

#The Florida Panthers#Islanders
The Associated Press