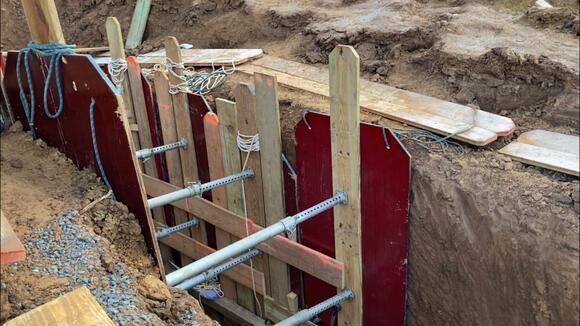 KNOXVILLE, Tenn. (WATE) — Two men survived a trench collapse in Powell. It’s a feat the rescuers on the scene are calling remarkable.

Two men were trapped under several feet of soil at a construction site on East Beaver Creek Drive just before noon on Thursday. That’s right next to the Evergreen at the Bluffs apartment complex.

By Thursday evening, after eight hours of rescue operations, both were freed.

“Patient number one was buried basically up to the shoulders. Patient number two was completely buried,” said John Whited, the Rescue Chief at Rural Metro Fire Department. “I’ve been doing this a long time in Knox County and we’ve never had one this deep in Knox County that’s survivable, and it’s absolutely amazing.”

On Friday morning, Rural Metro said one of the men had already been released from the hospital. Another was still there.

“When they went into that crouched position, that’s really what saved them. Because it was kind of like a position that you see the airline industry tells you to assume a crash position with your head down between your knees or as close to your knees as you can get it, and that’s kind of the way they were. So that gave them a pocket of air where the dirt was on top of them,” said Rural Metro spokesperson Jeff Bagwell.

The first responders in charge of the operation walked us through what they did, and why they had to do it.

“With any rescue operation like this, trench rescue, we have to stabilize the site first. And then we use shoring, which is to be able to hold the walls of the trench back. Then we’ll start our excavation process to remove the victims,” Whited said. “Generally if it is not shored or trench boxed in place, commonly what happens is during this time of year where you have thawing temperatures and freezing temperatures, soil composition has a lot to do with it, and it will cause it to lose cohesion and try to fall on you.”

Whited said he couldn’t speak to whether they saw signs of a trench box in place and said all the shoring our crews saw was done by emergency response personnel.

Still, the big message is relief and gratitude.

“It is rewarding to know that we had a successful mission. That we were able to change the course of someone’s life, essentially,” Bagwell said.

We also reached out to the Tennessee Occupational Safety and Health Administration, as the office is leading this investigation. A spokesperson said TOSHA is looking into the circumstances that led to this trench collapse to determine if the employer was adhering to all safety and health standards at the time of the incident.

‘It’s on the interstate?’ 911 calls released from plane’s emergency landing in Knoxville

Nearly three weeks after a plane landed on I-40 East at Papermill, the 911 calls of those who reported the plane landing have been released.
KNOXVILLE, TN・20 HOURS AGO
WATE

KNOXVILLE, Tenn. (WATE) — A South Knoxville apartment building sustained heavy damage after a fire Wednesday afternoon, according to Knoxville Fire Department Asst. Chief Mark Wilbanks. Crews responded to the scene of the fire at building Q of the Henley Apartments on Highwood Court. There were reports of heavy...
KNOXVILLE, TN・1 DAY AGO
WATE

A vacant commercial building along Lonas Drive in West Knoxville caught fire Wednesday and crews with the Knoxville Fire Department worked the scene for hours.
KNOXVILLE, TN・2 DAYS AGO
WATE

Authorities are investigating the cause of a fire that destroyed an RV and damaged an RV Tuesday morning, according to Sevier County Emergency Management Agency.
PIGEON FORGE, TN・2 DAYS AGO
WATE

PIGEON FORGE, Tenn. (WATE) — What used to be three rental cabins side by side is now completely gone and turned into rubble after an overnight fire in Pigeon Forge. An investigation is continuing into what caused the flames. Around 1 a.m. Tuesday, Sevier County Central Dispatch received a call reporting a structure fire in the […]
PIGEON FORGE, TN・2 DAYS AGO
WATE

A man is dead after a car crashed on I-40 East in Knoxville, according to Knoxville Police Department Spokesperson Scott Erland.
KNOXVILLE, TN・2 DAYS AGO
WATE

Brad's stepmom added even though his wreck was awful, it has brought the family together.
MARYVILLE, TN・12 HOURS AGO
WATE

One driver dead after I-40 crash in Knoxville

The Knoxville Police Department a two-car crash on I-40 that left one person dead Wednesday.
KNOXVILLE, TN・1 DAY AGO
WATE

The rainfall has been off and on in East Tennessee as we enter into February, however, there are still ways to have some free fun during the rain or sun.
TENNESSEE STATE・8 HOURS AGO
WATE

Arrest made after pursuit caught on camera

1 dead after crashing into bridge pillar on I-40

Business throws support behind possible new exit on I-40

A fugitive is currently in custody after a police chase in Loudon County Wednesday afternoon, according to Loudon County Sheriff's Office.
LOUDON COUNTY, TN・1 DAY AGO
WATE

A Silver Alert has been requested for a Knoxville Man who has been missing since around 1:20 p.m. on Tuesday.
KNOXVILLE, TN・2 DAYS AGO
WATE

Two families have shared the same story. They hired Sunrooms Express to enclose their screened-in porches with glass windows. Now, the contractor claims negotiations are underway with the couples, however, there is no specific timetable for payments.
KNOXVILLE, TN・1 DAY AGO
WATE

Knoxville Police are investigating after a man was injured in a possible hit and run.
KNOXVILLE, TN・1 DAY AGO