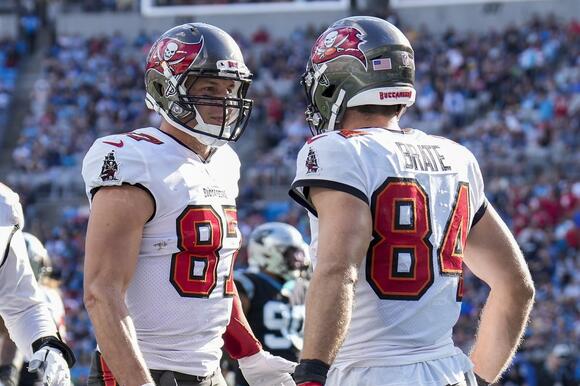 Discover player props odds, plays, and insights for Cameron Brate in his NFL Playoffs contest with the Tampa Bay Buccaneers against the Philadelphia Eagles.

There will be player prop betting options available for Cameron Brate ahead of Sunday's NFL action at 1:00 PM ET live on FOX. The NFC Wild Card round will see Brate's Tampa Bay Buccaneers enter a showdown against the Philadelphia Eagles at Raymond James Stadium in Tampa, Florida.

A grand jury indicted former Georgia linebacker Adam Anderson on Tuesday and charged him with rape. Anderson will be arraigned
NFL・25 DAYS AGO
Sports Illustrated

The UCF coach had little to say about his former rival coaches.
AUBURN, AL・2 DAYS AGO
Sports Illustrated

The Grammy Award-winning rapper will play professionally for the second consecutive season.
NBA・2 DAYS AGO

The Alabama coach: "There’s nothing illegal about doing this. It’s the system. That’s the issue I have."
COLLEGE SPORTS・2 DAYS AGO
Sports Illustrated

John Ruiz believes the Alabama coach was way off base with his comments.
MIAMI, FL・1 DAY AGO

The journeyman QB revealed the Bucs captain snubbed him on more than one occasion.
NFL・2 DAYS AGO
Sports Illustrated

The wide receiver said that he had to put himself and his family first while deciding to move on from Tennessee.
PHILADELPHIA, PA・1 DAY AGO

A tit-for-tat exchange between the Seahawks and Vikings in 2006 led the league to outlaw the cost-spiking strategy that's recently been in the news for other reasons.
SEATTLE, WA・2 DAYS AGO
Sports Illustrated

The final two goals for Tampa Bay from Nikita Kucherov and Stamkos came against an empty-net in the final minutes of the third period. The Lightning are trying to win a third consecutive Stanley Cup and have held Florida to just one goal in each of the first three games of the series. The Panthers finished the regular season with an NHL-best 4.15 goals per game and the league's best record.
TAMPA, FL・18 MINUTES AGO