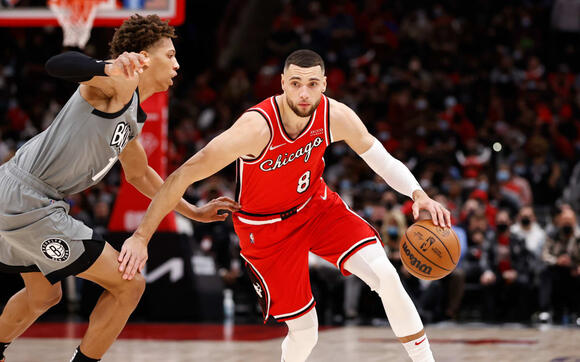 The pair of former UCLA guards are battling for a spot in the All-Star Game while Jrue Holiday and Lonzo Ball are currently on the outside looking in.

The second NBA All-Star voting update has been released and a few Bruin alumni are on track to make February's star-studded affair.

Two former UCLA men’s basketball alumni made the cut for the second round of NBA All-Star voting, with Los Angeles Lakers guard Russell Westbrook and Chicago Bulls guard Zach LaVine receiving enough votes to place in the top 10 at their position in their respective conferences. Milwaukee Bucks guard Jrue Holiday and Chicago Bulls guard Lonzo Ball, also former Bruins themselves, were not included within the 10 guards in the East and will have to hope for a late voting push to make the All-Star Game.

Westbrook returned to Los Angeles with mixed reviews as the season hits its midpoint. Averaging 18.7 points per game – his lowest total since the 2009-10 season – the former MVP has helped generate some serious frustrations within the Lakers fanbase.

Despite some negative fan reactions, though, there have been positives. The Lakers are still the No. 7 seed in the Western Conference and Westbrook ranks No. 6 in the league in assists and No. 26 in rebounds as a guard. As a result, Westbrook ranks sixth in All-Star voting for guards in the West with 576,512 votes to his name.

On the other side of the Association, LaVine has been a large part of the Bulls’ path to the top seed in the Eastern Conference. As a part of a backcourt duo with Ball, Chicago averages 111.5 points per game with a fast-paced offensive scheme – something both players showed experience with when playing at Pauley Pavilion.

LaVine has averaged 25.6 points, 4.9 rebounds and 4.3 assists per game in 37 games this campaign while shooting 49% from the field.

Unlike Westbrook, LaVine has eclipsed past 1,000,000 votes, with his tally sitting at 1,442,571, which is good enough for third place among guards in the Eastern Conference.

As of this moment, both Westbrook and LaVine seem to be in the driver’s seats to make the All-Star Game, holding high enough positions in the voting process that it would seem unlikely for the guards to slip outside of the picture when coach and player opinions are added in.

Holiday, who is now a league veteran in his 13th year in the NBA, has played at a high level in the 2021-2022 season, but he did not feature as a top-10 vote-getter in either first or second-round voting check-ins.

Missing the past four games with an ankle injury, Holiday has been unable to showcase why he should be an All-Star in recent weeks. But Holiday’s 18.4 points, 6.7 assists, 4.6 rebounds and 1.6 steals per game show the all-around nature of his game and what he could bring to February’s festivities as he did back in 2013.

Vote tallies for players outside the top-10 in their category are unknown, but Holiday is possibly on the outskirts and could sneak his way into becoming a guaranteed All-Star. Ball, on the other hand, is probably further out, but he too is making major contributions as a starter and 3-point ace on an Eastern Conference contender.

Whether it is two UCLA alumni in the All-Star game or more, the Bruins will surely be represented when the NBA’s best play in Cleveland come late February.

One of the top defensive backs in the West committed to the Bruins last summer before re-opening his recruitment in January.
LOS ANGELES, CA・1 DAY AGO
AllBruins

The Bruins staged a late comeback and piled on runs in the 10th to stay alive another day in Scottsdale.
SCOTTSDALE, AZ・1 DAY AGO
AllBruins

Only one former Bruin is left in the NBA Playoffs, while key betting odds have been released for UCLA football's upcoming season.
LOS ANGELES, CA・2 DAYS AGO
AllBruins

A nine-run comeback earlier in the day wasn't enough to get the Bruins to the conference championship game, as they blew a late lead themselves to end the night.
LOS ANGELES, CA・2 HOURS AGO

"You don't have to go back anymore," Cherelle Griner remembered telling her wife. "I was like, 'We'll figure something else out when it comes to pay.'"
BASKETBALL・2 DAYS AGO
AllBruins

The crosstown rivalry is in action on the recruiting trail, with linebackers coach Ken Norton Jr. targeting a 2024 prospect already committed to the Trojans.
COLLEGE SPORTS・2 DAYS AGO
AllBruins

For the second day in a row, the Bruins have reeled in one of the top players in Southern California, beating out Oregon, Arizona and Cal to do so.
SAN DIEGO, CA・1 DAY AGO
AllBruins

The Bruins are headed to Oklahoma City for the seventh-straight season and NCAA-record 31st time in program history.
OKLAHOMA CITY, OK・4 HOURS AGO
AllBruins

The Pac-12 Pitcher of the Year retired the final 14 Blue Devils while also driving in the game-tying and go-ahead runs in the sixth.
LOS ANGELES, CA・1 DAY AGO