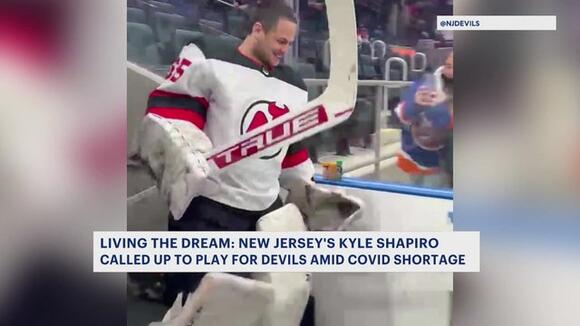 The Devils were forced to go deep into the minor leagues to find an emergency backup goalie due to COVID-19 absences - choosing the assistant coach of the New Jersey Titans minor league team.

Kyle Shapiro grew up in Middletown and now lives in Ocean Township. He doesn't have any NHL experience, but he played hockey at the Christian Brothers Academy before coaching in the minor league.

He joined the team on Long Island Thursday night but did not play.

Shapiro is signed to be the emergency goalie for about 12 games this year. Devils fans do hope they get their starters back, but some say they actually want to see him play.

The last time an emergency backup played in the NHL was when a 42-year-old suited up for the Carolina Hurricanes several years ago.

Police say they arrested a mother in Wolcott who left her 2-year-old son home alone while she went to Petco and then stopped at a gas station to take pictures of her car. Amanda Milligan, 28, was charged with risk of injury to a child. A neighbor called 911 after finding her toddler son wandering alone, wet and crying in their front yard with two dogs.
WOLCOTT, CT・1 DAY AGO
News 12

A missing 20-year-old from Poughkeepsie with special needs has been found dead, according to a Facebook post by his mother. Alicia McIver posted: “It is with the greatest sadness that I inform you all that the perfect, precious soul that was my son Jordan ‘Jay’ Jones was found deceased. I was informed last night by the city of Poughkeepsie PD. At this time, I'd like to thank you all for your help and prayers, and ask that you give me time. I will announce funeral arrangements as soon as they become finalized. Please pray for the strength for me and my family during this time.”
POUGHKEEPSIE, NY・1 DAY AGO
Yardbarker

Tiffany Wint’s 16-year-old son was seen on surveillance video being held down by three police officers in Brownsville on Friday.
BROWNSVILLE, TX・2 DAYS AGO
News 12

Milford police are searching for the man who stole a catalytic converter from a vehicle in a parking lot of a Target. It happened on May 17 around 7:30 p.m. Police say the catalytic converter was cut off of the car. When the suspect saw a witness taking photos, he...
MILFORD, CT・2 DAYS AGO
News 12

The owners of a Middletown pet shop are hoping the public can identify a man accused of taking one of the puppies. Video posted on Facebook from the Pet Shoppe on Highway 35 in Middletown shows a man playing with the 9-week-old Cockapoo puppy. The video then shows the man scooping the puppy up and running out of the store.
MIDDLETOWN, NY・2 DAYS AGO
News 12

'I am sorry for the family': Deadly stabbing suspect's father apologizes to victim's family

The 16-year-old Milford resident charged with murder in connection with the fatal stabbing of James McGrath, 17, of Shelton, has been identified by his lawyer. The attorney — spoke to reporters outside Derby Superior Court Thursday morning. Raúl Valle has been charged with murder, as well as three counts...
SHELTON, CT・2 DAYS AGO

A Bronx mother is asking the public for help looking for her 14-year-old daughter who has been missing since last week.
BRONX, NY・1 DAY AGO
News 12

Police are looking for a missing 14-year-old girl from Bridgeport. Officials issued a Silver Alert for 14-year-old Jayleen Burgos who has been missing since March 28. Police say Burgos is described as a white, Hispanic female who is 5 feet 1 inch tall. She was last seen wearing a grey-colored...
BRIDGEPORT, CT・1 DAY AGO
News 12

An alleged drug dealer from West Babylon was arrested after he was accused of ramming his car into a Nassau police car. Police say officers were involved in an investigation into a fatal overdose at the Best Western Hotel in Merrick when Javonne Mimms intentionally hit an officer's vehicle. An...
WEST BABYLON, NY・1 DAY AGO
News 12

The arrest warrant identifies 16-year-old Raul Valle, of Milford, as the suspect in 17-year-old James McGrath's death. Valle will be charged as an adult, the warrant reveals.
FAIRFIELD, CT・1 DAY AGO

A Bronx woman has been arrested for the murder of a Mount Vernon man in 2021. Police say Melissa Bell, 32, fatally wounded Corey Allen, 28, in a drive-by shooting in the Parkchester area in September. News 12 is told another man was injured in the attack too. Bell is...
BRONX, NY・2 DAYS AGO
News 12

Police say over 100 fugitives have been arrested on Long Island from May 2 through May 13 - dubbed the "Long Island Wave." According to officials, 18 state and local law enforcement departments as well as federal partners joined together to create a 200 person officer task force. The operation was a culmination of months of planning.
NASSAU COUNTY, NY・2 DAYS AGO
News 12

A heat advisory was issued in Westchester, Orange, Putnam and Rockland counties from noon to 8 p.m. Saturday as high temperatures and humidity could cause heat-related illnesses to occur.
ORANGE COUNTY, NY・1 DAY AGO
News 12

Selling and buying items on social media might be easy but it can also dangerous. Police are issuing a warning about selling items on platforms like Facebook Marketplace after a deadly transaction in the Bronx and a carjacking at gunpoint this week in the Town of Newburgh. "It's always risky...
NEWBURGH, NY・1 DAY AGO
News 12

The NYPD says it is still looking for a suspect in the killing of an 11-year-old girl in the Bronx Monday. The NYPD said Friday that 15-year-old Matthew Godwin was taken into custody and charged in the shooting of 11-year-old Kyhara Tay, who was struck by a stray bullet and killed while walking home from school.
BRONX, NY・1 DAY AGO
News 12

Customers flocked to a Middlesex County Costco Friday morning when the warehouse received cases of hard-to-find infant formula. Employees outside the Edison store told News 12 New Jersey they received a shipment of Similac 360 Total Care. Costco members were limited to two per customer. The shipment brought some relief...
EDISON, NJ・1 DAY AGO
News 12

A 16-year-old from Milford charged with murder in the stabbing death of a Fairfield Prep student is expected to appear in Derby Superior court today.
PUBLIC SAFETY・2 DAYS AGO