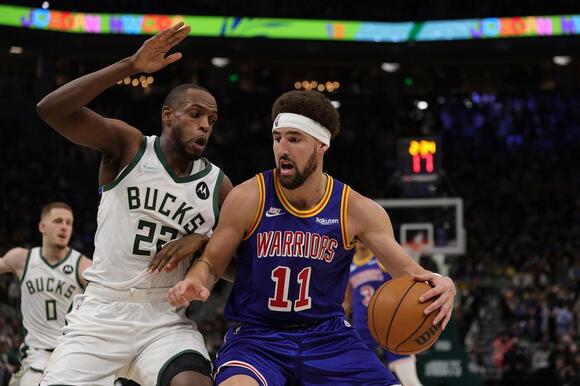 Warriors fans who want to see more of Klay Thompson could get their wish on Sunday.

Thompson will sit Friday night’s game against the Chicago Bulls, as it’s the second leg of a back-to-back following Thursday night’s 118-99 loss to the Milwaukee Bucks. But Warriors coach Steve Kerr told reporters Friday that Thompson could see an increase in minutes for Sunday’s game against the Minnesota Timberwolves.

“I think the plan is to bump him up a little bit on Sunday,” Kerr said. “Not too much, but a few minutes. And then we’ll go from there.”

No one ever wants to get blown out, but the Warriors used the big third-quarter deficit Thursday to let Thompson get an extended 10-minute run before garbage time in the fourth quarter.

“It was good. It was important,”  Kerr said. “I thought we had some games within the game last night that were important. I thought Klay playing that 10-minute stretch, without really looking fatigued, was great. I know he didn’t shoot it as well as he wanted. But his conditioning looked great.”

Thompson finished with 11 points on 3-of-11 shooting, including 2-of-7 from 3-point land in 21 minutes of play. He has averaged 20 minutes per game through his first three contests since missing two-and-a-half seasons with ACL and Achilles injuries. He usually has played the first few minutes of the first and third quarters, while playing the final minutes of each half (except for Thursday's second half). Thompson's five-minute runs may turn into six-minute runs for a total of 24 minutes played, or somewhere in that neighborhood.

Draymond Green (calf) is recovering well in the Bay Area and might even be in good enough shape to play Sunday against the Timberwolves, but the Warriors don’t want to push the issue.

“He’s doing well with his training with [director of sports medicine and performance] Rick [Celebrini] and rehab and everything is coming along really well,” Kerr said. “But I don’t think it makes sense to fly him to Minnesota for one game, when we can continue to keep him in the Bay doing rehab.”

Asked if thinks Green will play Tuesday against the Detroit Pistons at home, Kerr said, “I’m hopeful. I wouldn’t say I’m optimistic yet. As soon as I hear from Rick that that’s the case, then I’ll say that. But I talked to Rick last night and he said Draymond is really coming along well with his rehab.”

Kerr also said Gary Payton II (back) wouldn’t play Friday night but that he didn’t “know anything beyond that."

Grizzlies superstar Ja Morant tweeted out praise for Steph Curry but threw some shade at rookie Jonathan Morant after the Warriors eliminated Memphis in Game 6.
SAN FRANCISCO, CA・2 DAYS AGO
95.7 The Game

The legend of Game 6 Klay grows with epic performance vs. Grizzlies

Warriors guard Klay Thompson added to his legend of Game 6 performances with a 30-point game in Friday night’s 110-96 series-clinching win over the Grizzlies.
SAN FRANCISCO, CA・2 DAYS AGO
95.7 The Game

The NBA has announced the schedule for the Western Conference Finals after the Warriors clinched their series in six games vs. the Grizzlies. They await the winner of Mavericks/Suns.
SAN FRANCISCO, CA・2 DAYS AGO
The Oklahoman

The top-ranked Oklahoma softball team finished its regular season with a 5-3 victory over No. 7 Oklahoma State, sweeping the three-game set in Norman and winning the Big 12 championship to boot. OU (48-1) outscored OSU 18-4, with a tight fit coming on a drama-filled Saturday. The Sooners trailed 2-1, before the nation's home run queen, Jocelyn Alo, cracked a grand slam that fell into a young man's ball glove behind the right-field wall. ...
NORMAN, OK・25 MINUTES AGO