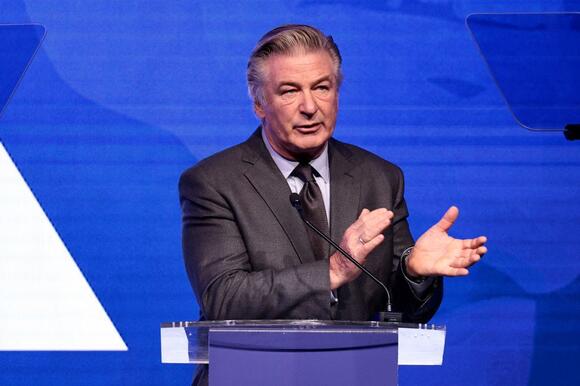 LOS ANGELES (KNX) — Actor Alec Baldwin turned his cell phone over to authorities on Friday, allowing investigators to search certain calls, text messages, and other data for information related to the fatal shooting of cinematographer Halyn Hutchins on the set of Rust in October.

Baldwin surrendered the phone and disclosed its password to the Suffolk County Police Department near his home in the Hamptons on Long Island, according to The New York Times . Investigators in Santa Fe County, New Mexico, where the shooting took place, issued a warrant for the phone nearly a month ago.

Under an agreement between investigators and Baldwin’s attorney, data on the phone will first be reviewed by Suffolk County authorities before relevant information is shared with those in New Mexico.

The search encompasses texts, emails, call logs, voice mail messages, digital images, and browser history information between June 1 and Dec. 5 of last year, and excludes any communications between Baldwin and his wife or legal representation.

“Mr. Baldwin has a right to privacy regarding the contents of the iPhone, as well as regarding communications with his attorneys and with his spouse,” the agreement said.

Baldwin remains one of the targets of New Mexico’s investigation into the Oct. 21 death of Hutchins. Moments before she was shot, Baldwin was rehearsing a scene with her and Rust director Joel Souza, during which time he practiced a “cross draw” maneuver with an antique Colt revolver, pointed it in Hutchins’ direction, and the gun went off. A live round killed Hutchins and wounded Souza.

Baldwin claimed in a December television interview that he did not pull the trigger.

A Westwood man was sentenced today to more than 17 years behind bars for his role in supplying the fentanyl-laced pills that led to rapper Mac Miller’s fatal overdose four years ago.
LOS ANGELES, CA・12 HOURS AGO
KNX 1070 News Radio

More than 8,100 new COVID-19 infections were logged over the past three days in Los Angeles County, again pushing up the average daily number of new infections, but virus-related deaths remain low and hospitalizations are relatively steady.
LOS ANGELES COUNTY, CA・8 HOURS AGO

The mother accused of killing her three children in the family’s West Hills home had her arraignment postponed. Angela Flores, 38, made her first court appearance Wednesday where she agreed to postpone the arraignment til’ August 10.
LOS ANGELES, CA・5 DAYS AGO
KNX 1070 News Radio

A Glendora man was sentenced today to four months in prison on a felony charge of destruction of government property for crimes related to the breach of the U.S. Capitol on Jan. 6, 2021.
GLENDORA, CA・3 DAYS AGO
KNX 1070 News Radio

ith trial scheduled to begin later this month, attorneys on both sides in a sexual battery lawsuit brought by a Riverside County woman against Bill Cosby have submitted lists of questions they wish for a judge to pose to prospective jurors.
SANTA MONICA, CA・4 DAYS AGO

A $50,000 reward is being offered for the arrest and conviction of the driver who struck and killed a 75-year-old man in South L.A. last month.
LOS ANGELES, CA・4 DAYS AGO
KNX 1070 News Radio

A man was hospitalized after being shot in his Riverside home by burglars. The shooting occurred around 5 a.m. Sunday on Moss Road, Riverside Police Department said.
RIVERSIDE, CA・12 HOURS AGO
KNX 1070 News Radio

Thousands gather in Downtown L.A. for Bans Off Our Bodies Rally

Thousands of people gathered at Grand Park in downtown Los Angeles Saturday morning for the Bans Off Our Bodies Rally. The rally, sponsored by the Women’s March Foundation, was one of several demonstrations taking place nationwide.
LOS ANGELES, CA・2 DAYS AGO
KNX 1070 News Radio

Dave Chappelle’s lawyer says the comedian is unhappy with Los Angeles County District Attorney George Gascón’s decision not to charge the man who allegedly attacked him on stage with a felony.
LOS ANGELES, CA・7 DAYS AGO

Los Angeles County would pay $32 million under a tentative settlement of a lawsuit filed by relatives of a 10-year-old Lancaster boy who died after allegedly being subjected to extensive torture by his mother and her boyfriend, attorneys said.
LOS ANGELES COUNTY, CA・5 DAYS AGO
KNX 1070 News Radio

The Los Angeles County Sheriff’s Office is searching for a man they say attempted to kidnap a young girl in Pico Rivera. Officials said it happened Tuesday at Pico Park around 3 p.m.
PICO RIVERA, CA・4 DAYS AGO

A probationer accused of torturing and killing a 39- year-old Jurupa Valley man was charged today with first-degree murder and other offenses.
JURUPA VALLEY, CA・5 DAYS AGO
KNX 1070 News Radio

A Sunday morning Mass at the Cathedral of Our Lady of the Angeles in downtown Los Angeles was disrupted by protestors dressed in outfits similar to those on the “The Handmaid’s Tale” TV show.
LOS ANGELES, CA・6 DAYS AGO
KNX 1070 News Radio

A woman and her older son were arrested in connection to the deaths of her three children in West Hill. Around 7:40 a.m. Sunday, police responded to the residence on the 22500 block of Victory Boulevard where they found three unresponsive children.
LOS ANGELES, CA・7 DAYS AGO