Q&A: Rep. Jamie Raskin discusses his son's death, his work on the January 6 committee, and the rioters who tried to claim their belongings after breaking into Pelosi's office 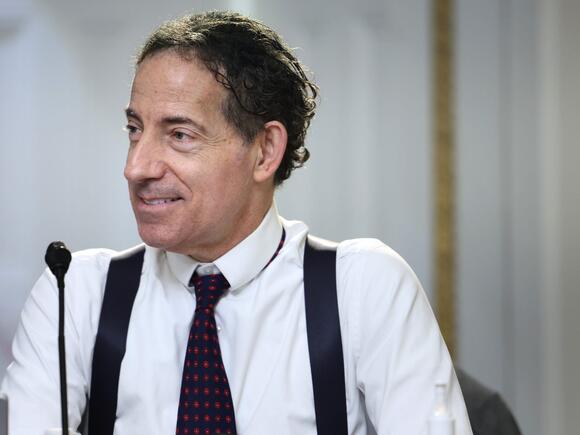 The day after Democratic Rep. Jamie Raskin of Maryland laid his 25-year-old son to rest, he was sheltering in place as the Capitol riot was unfolding.

Later that night, he would begin drafting articles of impeachment against former President Donald Trump.

Raskin, who sits on the House select committee investigating the insurrection, spoke with Insider about what he's described as the "cognitive dissonance" from those two major events in his life, which he delves into in his new book " Unthinkable: Trauma, Truth, and the Trials of American Democracy ."

This interview has been lightly edited for length and clarity.

Could take me back to the first moments you had to yourself on the night of the insurrection, particularly after your daughter told you she never wanted to come back to the Capitol again after witnessing that day first-hand. What was going through your mind at that point, and how do you make sense of it now after writing the book?

When Tabitha said that, it was shocking and dismaying to me. She was essentially telling me that my chosen career path and engagement in politics had become a negative thing in our lives. You know, I had always wanted to involve my kids in my political career and have them get to know my colleagues, and I've always just wanted them to be excited about government. And now I was getting the message from my daughter that my workplace was a danger.

I know I saw a lot more bloody things that day, far more extreme situations. But for some reason, that was the thing that struck me hard.

You were a constitutional law professor earlier in your career. Could you explain how strong of a case the committee would have in enforcing a subpoena if a member of Congress refused to comply?

That's certainly one of the potential legal and political flash points we face.

Under Article I of the Constitution, each house defines the rules of its own proceedings. Each house has disciplinary authority to sanction its members from reprimands and censures to expulsions. The speech and debate clause says that members should not be questioned for their legislative conduct outside of the Congress, but that clearly leaves the implication that they may be so questioned inside Congress itself.

So what would you do if someone like House Minority Leader Kevin McCarthy were to refuse to voluntarily turn over information and then potentially defy a subpoena?

Well, look, the committee has not discussed this yet, so everything that I said to you was in the manner of an abstraction about what the law is. I don't want to render legal advice to my colleagues. So let me make an ethical statement.

The media has hurried to get to the question of subpoenas, and contempt of Congress and how to coerce compliance. Before we get to the legalities of any of that, I would like people to focus on the fact that we have a former President of the United States who refuses to turn over information that he has about a violent insurrection against the union and an attempted political coup — and that's just an extraordinary thing, but everyone walks around assuming that, of course, Donald Trump won't cooperate in an investigation. But why do we concede that? All I'm saying is that we should consider this as a moral and ethical proposition, as well as a legal one. How did we get to a point where high ranking government officials have some kind of incentive and interest in denying the reality the first attack on the US Capitol since the war of 1812?

Could you explain what a "self-coup" is?

Usually we think of a coup as something that takes place against a president. This was a coup that was orchestrated by the president against the vice president and against Congress and the people. So a "self coup" is one that a president undertakes toward the normal constitutional process in order to seize, continuing control over the presidency.

You've talked about there being three rings to January 6: The biggest ring is the tens of thousands of people who came to Washington for a protest and many of them ended up storming the Capitol, but didn't necessarily plan to. Then you have the second ring of militia groups who had plans to disrupt the election certification, and the smallest ring of those around Trump. Is there one person who jumps out to you as the most consequential in that final ring aside from Trump himself?

It's a tough question because there has been so much stonewalling in that inner circle. I will say that Vice President Mike Pence really was a constitutional patriot who did his job on January 6, 2021. I considered his performance in the prior four years to be pretty submissive and sycophantic towards Donald Trump. But on January 6th, he really was a strong, constitutional patriot.

Is there something you think the American public should be paying more attention to, especially for those who haven't been following the January 6 news closely?

I would like people to understand that it was not one indivisible sequence of action, but there were different components to what was happening. One of the things I learned the next day was that there were lots of people calling Nancy Pelosi's office, asking whether there was a lost and found because they forgot their phone there, or they left their purse or what have you.

Yeah. And then the officers quickly got on the phone and said, yeah, just give us your name, your address, your social, and we'll tie up those loose ends.

But what's so fascinating to me about that there really were people who felt as if they had been summoned to Washington by the president. And when they were told that they were trespassing and invading the Capitol, they said the president invited them to be there. They didn't have any kind of subtle understanding of the separation of powers. They just thought that the number one person in the US government had invited them to be there, and therefore they had a right.

It underscores the central role that Donald Trump played in it, but it does create a problem for assigning guilt at different levels of conduct.

You write in the book about the loss of your son, Tommy, to suicide. What would you say to people who know someone going through the throes of mental illness who want to help, and have you thought about mental health policies — such as insurance parity — any differently?

It's a tough question because it seems like everybody's situation is so individualized. For some people, um, work can be a terrible stressor, but for other people work can be a kind of therapy and liberation from their illness and isolation. It's not clear to me that there are universal solutions.

Mental health parity is a very important pledge by society. It does send the message that mental health is on the same plane as physical health and that there's no reason for anyone to feel embarrassed about it. Of course the, the promise has been honored mostly in a breach up to this point. I mean, there are many parts of the country where there are shockingly few psychiatrists and counselors available.

So mental health parity is the right ideal, but the reality has not caught up yet.

If you or someone you know is struggling with depression or has had thoughts of harming themselves or taking their own life, get help. The National Suicide Prevention Lifeline (1-800-273-8255) provides 24/7, free, confidential support for people in distress, as well as best practices for professionals and resources to aid in prevention and crisis situations.

Fox News host Lisa Kennedy said on Monday that U.S. lawmakers "should not have the government involved in education at all," suggesting that America should rid itself of the public school system entirely. Kennedy's remarks came during Monday's segment of "Outnumbered" in which Kennedy was facilitating a discussion around the...
CONGRESS & COURTS・29 DAYS AGO
HuffPost

"Aren’t you slated to headline a speaking gig for the NRA in three days?" Democratic Rep. Alexandria Ocasio-Cortez replied.
TEXAS STATE・1 DAY AGO

The court is expected to hand down a ruling on the most significant gun-rights case in over a decade in late June or early July.
CONGRESS & COURTS・10 HOURS AGO
Newsweek

Kissinger says Ukraine must give up land to Russia, warns West not to seek to humiliate Putin with defeat

Veteran statesman Henry Kissinger warned the West against pursuing "a new war against Russia itself" through over-ambitious aims.
U.S. POLITICS・1 DAY AGO

"In retrospect, it's hard to understand David's campaign, and it's certainly not the campaign those of us who were for him expected," Gingrich told The New York Times of Perdue's race.
GEORGIA STATE・2 DAYS AGO
WashingtonExaminer

Federal prosecutors have alleged that Owens and his son, Grady, assaulted officers during the January 6, 2021 insurrection.
WASHINGTON, DC・2 DAYS AGO

International order will be thrown out the window if Russia is able to escape consequences over its invasion of Ukraine, US Gen. Mark Milley told CNN.
POLITICS・29 DAYS AGO
Newsweek

The intelligence the U.S. shared with Ukraine helped it continue to resist Russian invading forces and even shoot down a transport plane carrying hundreds of Russian troops, a new report revealed. According to current and former U.S. officials who spoke with NBC News on Tuesday, the U.S. provided critical intelligence...
MILITARY・29 DAYS AGO

An RNC member told Insider the difference between Cawthorn and Greene is "she says bad things about whole groups of people," but not GOP colleagues.
CONGRESS & COURTS・11 HOURS AGO
Business Insider

Mike Pence told Georgia Gov. Brian Kemp supporters that Tuesday's primary is about plotting the future, not reliving the past. One rallygoer's takeaway: 'Pence set the tone for post-Trump.'

"Programs like his should be broadcasted day and night. Or as you say 24/7," Hungary's far-right leader said of Carlson's Fox News show.
WORLD・2 DAYS AGO