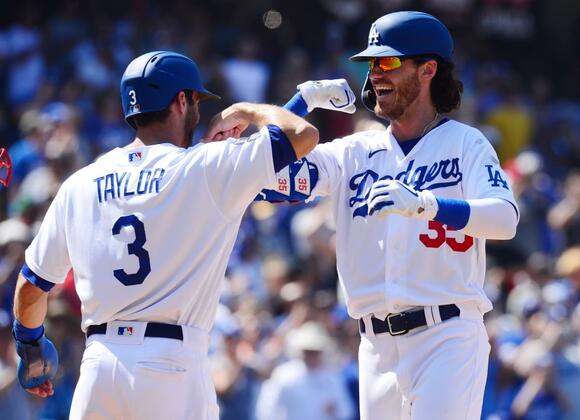 Dodgers utility star Chris Taylor announced a new charity page on Instagram and his plans to expand efforts in bringing “hope and assistance to the vulnerable in our LA and Virginia Beach communities.”

Taylor and his CT3 Foundation also announced an upcoming charity golf event in his hometown of Virginia Beach, VA, and that event is coming up this weekend.

Inspired by the loss of a close childhood friend to cancer, the primary focus of the CT3 Foundation is to raise money and awareness of childhood cancer.

Continuing on those efforts, the event is set to take place this Sunday, January 16th, from 12 pm ET – 4 pm.

The event will be an afternoon of golf, food, drinks, entertainment, and celebrity auction items as well as musical performances by special guests, D. Vincent Williams, and Kendall Street Company. All proceeds will benefit Children’s Hospital of The King’s Daughters and Roc Solid Foundation in support of the fight against pediatric cancer.

If you're unable to attend, you may still participate in the auction via the internet, which includes a diverse selection of trips and sports memorabilia. Taylor also said that a live feed of his bay at the venue will be available on his Instagram.

For the online auction, CT3 has got the help of several Dodgers teammates including Albert Pujols, Cody Bellinger, Walker Buehler and more.

Additionally, signed jerseys from NBA Hall of Famers Michael Jordan and Dodgers' owner Magic Johnson have been added to the auction

More information about the event and auction can be found here .

Chris Taylor Reveals Why He Always Wanted To Re-sign With Dodgers, How Will LA Use CT3 Next Season?

Dodgers: Gavin Lux Reveals He Was Unaware it was the Ninth Inning On Base Paths

Dodgers second baseman Lux got a little lost in the moment after his walk-off double on Sunday.
LOS ANGELES, CA・2 DAYS AGO
Inside The Dodgers

Russell Martin is getting into the alcohol game.
LOS ANGELES, CA・2 DAYS AGO
Inside The Dodgers

Clayton Kershaw has a setback in his road to recovery.
LOS ANGELES, CA・1 DAY AGO

The Dodgers made a pair of roster changes prior to first pitch against the Diamondbacks on Monday.
LOS ANGELES, CA・2 DAYS AGO
Inside The Dodgers

The Dodgers have DFA'd reliever Shane Greene.
LOS ANGELES, CA・2 HOURS AGO
Inside The Dodgers

Dodgers: Caleb Ferguson Battled Butterflies Before His First Game Since 2020

Caleb Ferguson was a little nervous before taking the mound for the first time since Tommy John surgery.
LOS ANGELES, CA・1 DAY AGO
Inside The Dodgers

Hanser Alberto took the mound during the Dodgers blowout win of the Arizona Diamondbacks.
LOS ANGELES, CA・20 HOURS AGO