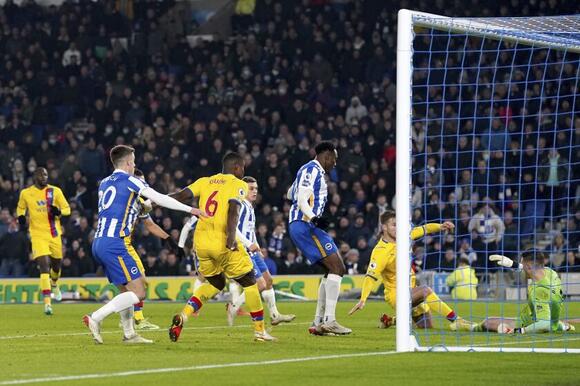 Striker Neal Maupay's late pass forced an own goal from defender Joachim Andersen as Brighton drew at home to fierce rival Crystal Palace 1-1 in the English Premier League on Friday.

Maupay collected a quick ball from Marc Cucurella and turned in one movement to hit a low cross from the left that Andersen turned into Palace's net in the 87th minute.

Substitute Danny Welbeck then glanced a header just over for Brighton in stoppage time, and the home side then saw a claim for a last-gasp penalty turned down following a video review.

Brighton was in eighth place and Palace was 11th.

Midfielder Conor Gallagher punished Brighton for missing a first-half penalty and other chances when he pounced in the 69th minute of a hard-fought game between teams whose fans have clashed in recent seasons. A police cordon in the stand separated them after Brighton's late equalizer.

Gallagher's effort came after Jeffrey Schlupp did well to stop the ball from going out before spinning a pass for him.

Gallagher, on loan from Champions League winner Chelsea, controlled it excellently and blasted past goalkeeper Robert Sanchez in front of Palace's ecstatic fans for his seventh league goal.

Maupay had a goal ruled out in the 40th following a review for bundling the ball over the line when goalkeeper Jack Butland had both hands on it.

Two minutes earlier, Butland stopped a sloppy penalty from Pascal Gross after VAR picked up a foul from Will Hughes on Joel Veltman on a corner. It was Butland's first penalty save in the Premier League.

Brighton went close again in the 48th when Jakub Moder hit the crossbar from a Gross cross.

Coach Patrick Vieira's Palace side finally perked up and, moments later, Adam Webster's toe-poke from a right-wing ross was saved by Sanchez.

Butland then made a fine save moments later to deny the Poland midfielder Moder his first Premier League goal.