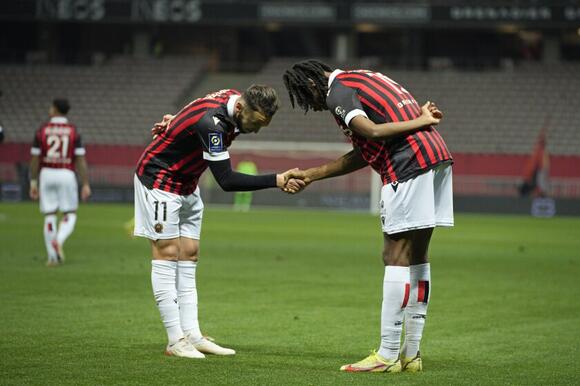 Midfielder Khephren Thuram scored a second-half winner as second-placed Nice beat Nantes 2-1 at home in the French league on Friday.

Nice is three points ahead of third-placed Marseille, which has played two games less and faces defending champion Lille on Sunday night.

Thuram is the 20-year-old son of Lilian Thuram, who won the 1998 World Cup and 2000 European Championship as an outstanding right back for France, and the younger brother of Borussia Moenchengladbach forward Marcus Thuram.

Standout forward Amine Gouiri set up Thuram in the 55th for a sixth assist to go with his nine league goals this season. They bowed to each other and shook hands in mutual appreciation.

Denmark striker Kasper Dolberg netted his sixth goal of the campaign when he converted a 20th-minute penalty, following a handball from defender Abdoulaye Sylla.

Brazilian midfielder Andrei Girotto equalized with a free kick moments before the interval.

With Lionel Messi taking longer than he expected to recover from the coronavirus, Kylian Mbappe will again spearhead league leader Paris Saint-Germain’s attack at home to Brest.

Saint-Etienne has won a record 10 league titles but sits in last place ahead of the home game against sixth-placed Lens.