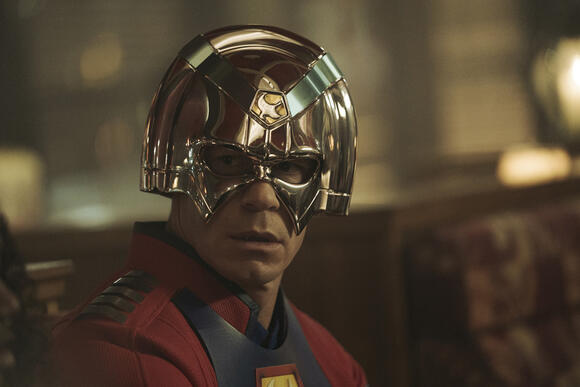 John Cena ’s Peacemaker shows off his moves in the opening credits sequence for the newly released HBO Max series.

On Friday, writer and director James Gunn brought in the weekend by dropping a clip of the show’s upbeat opening, which begins with the Cena dancing to Wig Wam’s “Do Ya Wanna Taste It.”

“Due to an incredibly popular request, here are the opening credits of #Peacemaker,” Gunn tweeted.

Peacemaker , produced by Peter Safran and starring Cena in the title role, explores the continuing story of the character in the aftermath of Gunn’s 2021 DC film The Suicide Squad. It’s about a man who believes in peace at any cost, no matter how many people he has to kill to get it.

The series, which made its debut on Thursday Jan, 13, also features Danielle Brooks as Adebayo, Freddie Stroma as Vigilante, Jennifer Holland as Harcourt, Chukwudi Iwuji as Murn, Steve Agee as Economos and Robert Patrick as Auggie Smith.

The opening sequence grows from Cena’s solo to a larger ensemble dance featuring Brooks, Stroma, Holland and more. They swing their arms over their head, shuffle and pelvic thrust in unison.

Peacemaker premiered with three episodes and new installments will drop on HBO Max weekly through Feb. 17.

Gunn wrote all eight episodes of Peacemaker and directed five, including the first. Gunn, Safran and Matt Miller serve as executive producers, with Cena as co-executive producer. Peacemaker is produced by Gunn’s Troll Court Entertainment and The Safran Company in association with Warner Bros. Television.

Watch the dance-filled sequence below.

Click here to read the full article. Maggie Peterson, an actress who made a lasting impression as the sweet-natured, occasionally flirtatious mountain girl Charlene Darling on The Andy Griffith Show in the 1960s, died May 15 in Colorado, her family has announced. “It is with great sorrow that we report that our dear Aunt Maggie died yesterday afternoon,” the family posted on Facebook today. “She passed peacefully in her sleep with her family present.” Hollywood & Media Deaths In 2022: Photo Gallery Although she appeared on only five episodes of the classic rural sitcom in the Charlene role, Peterson was among the show’s...
NFL・1 DAY AGO
Deadline

Click here to read the full article. EXCLUSIVE: TV pilots’ role is to serve as a prototype for a series. Sometimes, networks make changes to that prototype when they proceed to mass production with a series order, which unfortunately affects talent. Two of ABC’s newly picked-up series, The Rookie‘s Feds spinoff, headlined by Niecy Nash, and the Gina Rodriguez-starring comedy Not Dead Yet, are going though the process this year. Nash was one of four actors who guest starred in the two-episode arc on The Rookie, which served as backdoor pilot for The Rookie: Feds. Three of them, Nash, who plays...
TV SERIES・3 DAYS AGO
Deadline

Click here to read the full article. Elon Musk said overnight that his $44 billion acquisition of Twitter can’t move ahead unless the company backs up statements about the number of fake accounts on the platform, which the company has put at under 5%. It’s something he’s been picking at for days but made explicit in a tweet early Tuesday as some estimates put the number of spam accounts at 20%. “20% fake/spam accounts, while 4 times what Twitter claims, could be *much* higher. My offer was based on Twitter’s SEC filings being accurate. Yesterday, Twitter’s CEO publicly refused to show proof...
NFL・10 HOURS AGO
Hello Magazine

Robin Roberts got emotional as she opened up about her relationship with partner Amber Laign, especially in the midst of a challenging health battle. The Good Morning America star made an appearance on The Ellen DeGeneres Show to promote her new book, Brighter By the Day. VIDEO: Robin Roberts enjoys...
CELEBRITIES・22 DAYS AGO

Once again, Disney (DIS) - Get Walt Disney Company Report is finding itself embroiled in a political quagmire owing to its support of the LGBTQ community, after Florida Gov. Ron DeSantis punished Disney for denouncing his “Don’t Say Gay Bill,” by seeking to revoke Disney World’s designation as a special tax district (which as we pointed out, is ultimately a meaningless gesture).
FLORIDA STATE・21 DAYS AGO
ComicBook

After weeks of silence, Chris Rock has finally addressed his now-infamous incident with Will Smith at March's 94th Annual Academy Awards. During another sold-out show at Baltimore's Lyric Performing Arts Center on Friday, Rock directly referenced the slap, but only spent a second on it before moving on with his set.
BALTIMORE, MD・23 DAYS AGO
Outsider.com

“NCIS: Los Angeles” star Daniela Ruah absolutely killed it on the red carpet and stage last night at the International Portuguese Music Awards. While everyone at home was preparing for tonight’s “NCIS: Los Angeles” episode, Daniela Ruah was getting all dressed up to host the IMPA Awards. The ceremony took place at the Providence Performing Arts Center in Providence, Rhode Island, on Saturday, April 23.
LOS ANGELES, CA・23 DAYS AGO
The Hollywood Reporter

Geroge Wendt, who played Norm on the classic TV show Cheers, decided to be like Jack when he was in public. We mean Jack Nicholson here. The famed movie actor seemingly did not mind being noticed when out among the non-Hollywood crowd. Nicholson’s attitude about this did ring a bell for Wendt during his show’s incredible run on NBC and in reruns today.
CELEBRITIES・21 DAYS AGO
Us Weekly

The show — and the vacation — must go on. Jada Pinkett Smith determined that the family trip to India wasn't going to be canceled due to Will Smith's Oscars slap. "Will and Jada have taken the family on [a] vacation that was already planned," a source exclusively tells Us Weekly. The Concussion star, 53, […]
CELEBRITIES・23 DAYS AGO
Popculture

One of the stars of This Is Us is on the move to a new network in advance of the show's series finale. Deadline reported in March that Chris Sullivan, who plays Toby on the NBC series, will headline a comedy pilot for ABC. His new show is set to be titled The Son In Law.
TV SERIES・20 DAYS AGO
Deadline

Click here to read the full article. While a number of outlets have reported the milestone as already surpassed, the U.S. Centers for Disease Control and Prevention on Monday made it official: More than one million Americans have lost their lives in cases related to Covid-19. The real toll is likely much higher. The death toll is “equivalent to a 9/11 attack every day for 336 days,” according to The Associated Press, which confirmed the news today. “It is roughly equal to how many Americans died in the Civil War and World War II combined.” The number is roughly in like with...
NFL・1 DAY AGO

Click here to read the full article. Disney CEO Bob Chapek opened Disney’s upfront in New York by telling a crowd of several hundred advertisers that the company is “the most powerful force in the industry” and “the most enduring and beloved name in entertainment.” After a bumpy start to 2022, at least in terms of public perception, Disney has delivered positive results recently, reporting streaming gains and improved theme park revenue in the quarter ending in early April. The upfronts crowd has been anticipating the Disney presentation with particular relish since the news earlier this year that Disney+ is poised...
BUSINESS・3 HOURS AGO
Deadline

Click here to read the full article. Steve Martin crashed his Only Murders co-star Selena Gomez’s first episode as host of SNL, for a pre-taped sketch on whoopie cushion inventor, Archie Gizmo. The segment on Martin’s fictional inventor came as part of the show American Inventors, hosted by Taylor Gosh (Gomez). “The automobile, paper cup, dancing, computer. These were all invented. But who did that, and what is their story?” Gosh wonders up top. “We begin with Archie Gizmo, the brilliant inventor of the whoopie cushion.” We then cut to Gizmo himself, who explains that back in the early ’60s, he was just...
NFL・2 DAYS AGO
Deadline

Click here to read the full article. In today’s traditional doubleheader opening of the upfronts in New York, Fox and NBCUniversal execs took digs at the “paywall” strategy of Netflix and Disney, in the first of many salvos expected this week. Kicking off Fox’s mostly virtual event, ad sales chief Marianne Gambelli took note of the industry’s shift to subscription streaming in recent years. “Everybody is chasing subscribers” except for Fox, she marveled. Fox Sports CEO Eric Shanks took it a step further, telling the ad-buying audience, “”We know that without you, we would just be Netflix.” Entertainment chief Charlie Collier built...
NFL・23 HOURS AGO
Deadline

Click here to read the full article. Selena Gomez and Melissa Villaseñor—as Sofia and Vanessa, respectively— channeled their inner chola on SNL for a sketch that saw the Latina duo hosting a talk show, A Peek At Pico. Both Gomez and Villaseñor are of Mexican descent. Their show focused on the comings and goings around the city of Pico Rivera, located in Southeast Los Angeles County, featuring commentary from Sofia and Vanessa discussing what’s been going on in their lives focusing on the most mundane. For example, Gomez’s Sofia can’t get over this new eyeliner she tried recently that poked her in...
NFL・2 DAYS AGO
Deadline

Click here to read the full article. Selena Gomez tonight made her debut as host of Saturday Night Live, speaking in her opening monologue about the Hulu series Only Murders in the Building, which has her starring alongside Steve Martin and Martin Short, and more. Gomez opened her monologue by noting that growing up, she’d watch the late-night show with her mother every week. “This is a big moment for me,” she said. “I actually started acting when I was seven, and I’ve been lucky enough to work with some Hollywood icons, [like] Steve Martin, Martin Short and, of course, Barney.” We...
NFL・2 DAYS AGO
Deadline

Click here to read the full article. A war of words has broken out between the filmmakers who have brought audiences two different versions, nearly two decades apart, of the real-life mystery behind The Staircase. French director Jean-Xavier de Lestrade’s 2004 Peabody Award-winning documentary told the story of the fortunate Peterson family who lived in a luxurious mansion in North Carolina, until Kathleen Peterson’s body was discovered at the foot of a staircase, and her husband Michael was tried for murder. More recently, Antonio Campos has adapted the same story into an HBO Max TV drama series starring Colin Firth and Toni...
NFL・2 DAYS AGO
Deadline

Click here to read the full article. Warren Buffett’s Berkshire Hathaway reported Monday in a securities filing that it has acquired a stake in Paramount Global after acquiring $2.6 billion in Class B shares. The SEC Form 13F filing showed that Buffett’s company acquired almost 69 million shares of Paramount Global during the first quarter, along with revealing that it also took other stakes in companies like Citibank. Overall, the investing giant acquired $51 billion in stocks during the first three months of 2022. Buffett, who also owns stakes in entertainment companies like Apple and Amazon, buys into Paramount Global, formerly ViacomCBS,...
STOCKS・22 HOURS AGO