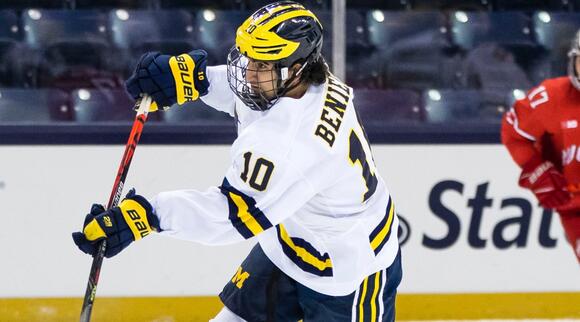 Without NHL participation in the 2022 Winter Games, Team USA is relying heavily on teenagers, collegiate athletes and journeymen alike for its squad.

Red, white and blue, and a whole lot of youth. After the NHL and NHLPA agreed to not send its players to the Beijing Winter Olympics, the U.S. men’s hockey team has taken on a different texture. Team USA is younger, less experienced and headlined by 19-year-olds Jake Sanderson and Matty Beniers.

If one quick glance at the roster smells like teen spirit, it’s because it does. For the first time since 1984, five teenagers will suit up for the U.S. There are more players currently in college (15) than those with NHL experience (7). So, forgive David Quinn if he starts having flashbacks to his five-year tenure at Boston University. Albeit without familiar faces: Michigan and Minnesota lead the team with four current or former players each.

It’s fun to lose and to pretend, Kurt Cobain wrote, but, for the U.S., it might be even better to win and contend without expectations. Here’s a first look at the team, which will begin preliminary round play against China on Thursday, Feb. 10.

Beniers, the Kraken’s No. 2 pick in the 2021 draft, will be the youngest player to take the ice for the men’s hockey team in 38 years. At 6'1" and 175 pounds, Beniers is a two-way center who thrives in the transition game. He has 26 points in 22 games, helming Michigan’s loaded top line with fellow Olympian Brendan Brisson and Kent Johnson.

While the roster features some collegiate bonds, it’s easier to find shared history from the U.S. National Team Development Program. Teenage skaters Beniers, Sanderson, Brock Faber and goaltender Drew Commesso all played together on the 2019–20 U-18 USNTDP squad. Sanderson, the Senators’ No. 5 pick in the ’20 draft, is the son of longtime NHLer Geoff Sanderson and leads North Dakota’s blue line. He’s averaging 1.29 points per game, first among all NCAA defensemen.

The rest of the group⁠—Faber, Commesso and Minnesota forward Matthew Knies⁠—were all selected within the first two rounds of the last two drafts.

This year’s squad is the youngest (25.1 years old) that it’s been in 28 years, and that’s due to its overwhelming inclusion of NCAA athletes. Excluding the teens, eight of the 10 collegiate players have been drafted by an NHL team. Nathan Smith, a Jets’ 2018 third-round pick, leads Division I with 33 points in 22 games for No. 1 Minnesota State.

Elsewhere, forwards Brisson, Sam Farrell and Nick Abruzzese share a common heritage with the USHL’s Chicago Steel. Brisson, one of three first-round draft picks on the roster, is the son of superagent Pat Brisson, who represents stars like Sidney Crosby, Nathan MacKinnon and John Tavares. The Golden Knights’ No. 29 pick in 2020, Brisson leads all sophomores with 14 goals in 23 games for Michigan. Outside of Cambridge and down Commonwealth Avenue, defenseman Drew Helleson and forward Marc McLaughlin play at Boston College. They’re one of five groups of players who are current college teammates. Farrell and Abruzzese (Harvard); Sam Hentges and Nick Perbix (St. Cloud State); Beniers and Brisson (Michigan); and Knies, Faber and Ben Meyers (Minnesota) are the others.

Noah Cates, a Flyers prospect and captain at Minnesota Duluth, helped the Bulldogs win back-to-back national championships in 2018 and ’19. His older brother, Jackson, has played six games for Philadelphia this season.

Brian O’Neill, the roster’s only player with Olympic experience, is one of seven players averaging more than a point per game in the KHL. He won the AHL MVP in 2015 and had a brief stint with the Devils during the ’15–16 season.

Staying in the KHL, Steven Kampfer and Kenny Agostino both left the NHL after last season to join Russia’s premier hockey league. Kampfer, who last played for the Bruins, ranks sixth among all KHL defensemen with 30 points. Agostino has scored 20 goals for Torpedo Nizhny Novgorod, the eighth-most in the league. He also won the AHL MVP, in 2017, and might be best remembered for winning an NCAA title with Yale or for being one piece in the trade that sent Jarome Iginla to Pittsburgh.

The team’s elder statesman, at 34, is goaltender Pat Nagle. He was a standout netminder for the ECHL’s Toledo Walleye, in which he had a 68-24-7 record and .916 save percentage across three seasons. He’s undefeated in eight games with the Flyers’ AHL affiliate, the Lehigh Valley Phantoms. Also in net, 23-year-old Straus Mann plays for the Swedish Hockey League’s ​​Skellefteå Aik. His 1.77 goals-against average and .930 save percentage rank first among all goaltenders.

Defensemen David Warsofsky and Brian Cooper round out the team’s 23-man roster. Warsofsky played 55 games over five seasons with the Bruins, Penguins, Devils and Avalanche, while Cooper was a one-time Ducks prospect.

This isn’t a dream team, but it doesn’t need to be. The 2022 Winter Olympics offers a chance to see some of the U.S.’s premier prospects compete on the world stage—a true once-in-a-lifetime opportunity for the teenagers, collegians and journeymen alike.

• Who Are Olympic Favorites Without the NHL?
• NHL Power Rankings: Making All-Star Picks for Every Team
• Evgeni Malkin Is Back, and Just in Time for a Playoff Push

The Rise of Aging Rookies: Meet the WNBA’s Veteran Debutants

This season has seen seven rookies who are at least 26 years old, all veterans of the game finally getting the chance to play Stateside.
BASKETBALL・1 DAY AGO
Sports Illustrated

Typically, what comes to mind with rugby is not a Black woman from South Carolina. But Naya Tapper knows things don’t always go as planned—which is how she became a face for the growing sport instead.
TENNIS・1 DAY AGO
Sports Illustrated

Both teams will square off on Sept. 3 on ESPN’s ‘College GameDay.’
OHIO STATE・1 DAY AGO
Sports Illustrated

Staley: “We all need to join forces to bring her home to her family."
NBA・22 HOURS AGO

The forward played for the Tar Heels from 1995 to ’99, helping the team to two Final Four appearances.
BASKETBALL・1 DAY AGO
Sports Illustrated

Silver: “Our number one priority is her health and safety, and making sure she gets out of Russia.”
NBA・1 DAY AGO
Sports Illustrated

The leader of the Buckeyes is now poised to be in Columbus through the 2028 season.
COLUMBUS, OH・22 HOURS AGO

The new guidelines will allow leagues the chance to determine how they want to select championship game competitors.
COLLEGE SPORTS・20 HOURS AGO
Sports Illustrated

Betting analysis for the Eastern Conference finals between No. 1 Miami and No. 2 Boston. The Celtics are favored at SI Sportsbook to win the series.
MIAMI, FL・2 DAYS AGO
Sports Illustrated

The former WNBA champion and 2022 Hall of Fame inductee makes it her priority to ensure that her franchise feels valued and appreciated.
NBA・2 DAYS AGO
Sports Illustrated

Making the Case for the American Baseball Cup

The NBA is reportedly discussing the merits of an in-season tournament. MLB is the league that needs it.
MLB・1 DAY AGO

The NCAA announced Wednesday that FBS conferences can now determine the format for their respective championship games.
COLLEGE SPORTS・20 HOURS AGO
Sports Illustrated

With the play-in tournament for the playoffs here to stay, the NBA is looking to add another new competition format.
NBA・1 DAY AGO
Sports Illustrated

Since arriving from Butler, the 50-year-old coach has taken Ohio State to four NCAA tournaments.
COLUMBUS, OH・21 HOURS AGO

Behind the Scenes of the 2022 NBA Draft Lottery

For nearly four decades the lottery has been a big night on the NBA calendar. Here is how it all went down last night.
NBA・1 DAY AGO
Sports Illustrated

Fast and Furious: Heat Use Speed to Slow Down Celtics

Betting analysis of the odds for the NBA draft No. 1 pick. Auburn’s Jabari Smith is the favorite to go first, followed by Gonzaga’s Chet Holmgren and Duke’s Paolo Banchero.
AUBURN, AL・21 HOURS AGO