‘Rainbow Six Extraction’: Release date, pre-order guide and how to try it for free 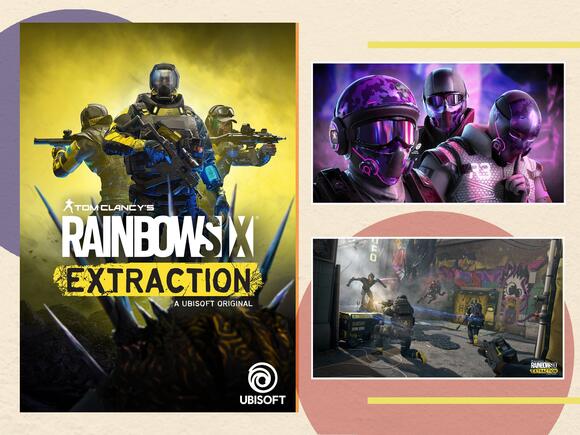 Rainbow Six Siege has become one of the most popular tactical shooters in the competitive gaming space and it’s easy to see why. With its intense five versus five firefights and elaborate maps, Ubisoft Montreal’s 2015 release found new life in the e-sports realm and became something of a sleeper hit.

That’s why when Rainbow Six Extraction was announced in June 2019 with the working title “Quarantine” (it’s not hard to guess why they might have changed that), it was seen as a step in a different direction.

Rather than focus on the competitive aspects of Siege , Rainbow Six Extraction is a co-operative three-player shooter where players work together against hoards of alien enemies. Extraction is not so much a designated replacement for Siege, but a thematic spin-off that puts playable characters (known as operators) against the backdrop of a parasitic alien invasion.

No longer grounded in realism, Extraction uses its creative new setting to take its familiar gameplay in a bold new direction. Three players will take control of one unique operator each during sessions and must work together to complete a series of objectives, such as gathering intel or collecting samples, while simultaneously being pursued by an alien threat.

Ahead is all the info we know about the latest instalment in the Rainbow Six series, from pre-order details to which characters will be available and even how you can get yourself a free copy on launch day.

When is ‘Rainbow Six Extraction’ out in the UK?

How to pre-order ‘Rainbow Six Extraction’

There is a standard edition available that includes a “buddy pass” and a deluxe edition, which includes cosmetic upgrades, XP boosters for post-launch events and a 10 per cent discount in the in-game shop.

Rainbow Six Extraction will also be made available on Xbox Game Pass as soon as it launches, which should ensure that lobbies will be well populated come launch day.

What is the buddy pass and how does it work?

Rainbow Six Extraction is a co-operative shooter, so who better to play it with than your nearest and dearest? With a buddy pass, your friends can join you in the action, even if they haven’t bought the game. You can invite up to two friends to download the game to play for free.

There is a catch, though. The buddy pass will only last up to 14 days, so after that they will need to buy a copy themselves. It’s a good way to try the game out before committing to a full purchase.

Which operators will be playable?

Eighteen of the operators featured in Rainbow Six Siege will be making their way over to Extraction to form the “Rainbow Exogenous Analysis & Containment Team” (or REACT, if they were straining for the acronym ) and tackle the alien threat.

If you’re familiar with the roster from Siege, the operators that have been confirmed to be making the jump over to Extraction are as follows: Sledge, Smoke, Doc, Rook, Fuze, Tachanka, IQ, Jäger, Lion, Finka, Pulse, Capitão, Hibana, Ela, Vigil, Alibi, Nomad and Gridlock.

For the latest discounts on consoles and other tech offers, try the links below:

Looking for a new gaming chair to sink into? Here’s a round-up of some of our favourites

UPDATE: The PS5 has once again sold out at PlayStation Direct, but is still available at Game and Scan. The PS5 is set to restock next at Very, BT Shop and EE. Read on for more information.It’s been a year and a half since the PS5 was first released, and a year since we started officially tracking PS5 restocks, yet we’re all still here, clinging on to the dream of owning one of the elusive consoles.While you still can’t reliably buy a PS5 in-store, the situation has massively improved online in recent weeks, and it led to a temporary respite from the console...
FIFA・2 HOURS AGO
The Independent

Where is Dyson’s airwrap complete and new multi-styler in stock in the UK?

When Dyson first launched its airwrap in 2018 it quickly reached cult status. And for good reason too. It blowdries and styles hair all in one go, making it a great choice for quick and speedy salon-quality locks at home. But, anyone who has tried to get their hands on the hair tool will know that it’s been near-impossible, with stock drying up (pardon the pun) almost entirely. The brand attributed this to global supply chain issues, but we’re hazarding a guess that it is also down to the launch of its all-new, revamped multi-styler that graced us in...
HAIR CARE・2 HOURS AGO