Lions could be coaching their next quarterback in Senior Bowl 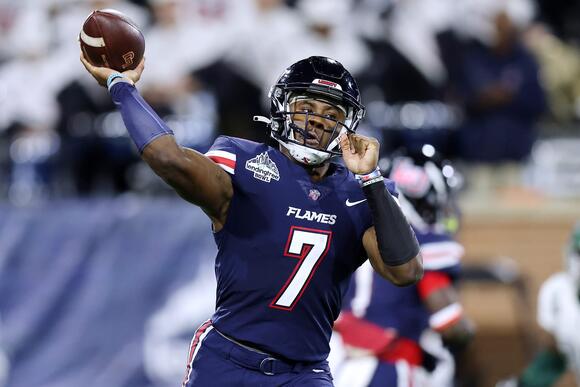 If the Lions have their eyes on a quarterback in the draft -- and why wouldn't they? -- they'll be up close and personal with some of their top options at next month's Senior Bowl in Mobile, AL.

Detroit has two first-round picks, the second of which will be determined by the Rams' finish in the playoffs and could land right in the middle of a run on quarterbacks. It will also pick early in the second round.

Howell entered this season as a potential top-10 pick, but his stock took a bit of a hit after a less prolific year passing the ball. Still, he finished his college career with well over 10,000 passing yards and 92 touchdowns to 23 picks. He also rushed for over 800 yards and 11 touchdowns this season.

Willis, an unheralded recruit in 2017 who transferred after two years at Auburn, might be the most intriguing quarterback in the draft. He might be the most intriguing prospect, period. Some experts view him as a top-10 pick. Others say he's a fringe first-rounder. He's a true dual-threat QB either way, having compiled 47 passing TD's and 27 rushing TD's in his two seasons at Liberty.

Zappe, even less recruited than Willis, just put up the best passing season in college football history. He broke NCAA records with 5,967 yards and 62 touchdowns; the latter record previously belonged to Joe Burrow. Both Zappe and Willis will be questioned for their quality of competition, which places a premium on their performances in Mobile -- and makes the Lions' perspective all the more valuable.

Detroit's coaching staff will also get crossover practice time with the National Team, which features three more high-profile QB prospects in Pitt's Kenny Pickett, Cincinnati's Desmond Ritter and Nevada's Carson Strong. All of them are considered possible first-round picks. One likely first-round QB who won't be there is Matt Corral of Ole Miss; he declined the Senior Bowl invite after injuring his ankle in the Sugar Bowl.

It remains to be seen which quarterbacks participate in the actual game on Saturday, Feb. 5, but the practice sessions in the days prior are often just as important. Former Alabama QB Mac Jones arrived at last year's Senior Bowl as a fringe first-round pick, sat out the game after shining throughout the week at practice and was drafted 15th overall by the Patriots.

As Lions GM Brad Holmes said this week, there are hidden gems in the Senior Bowl every year. You just have to know where to look -- Dan Campbell and the Lions are about to get the best look possible.

"The roster looks good," said Holmes. "I know back when I was with the Rams, we were able to acquire a lot of guys that played in the Senior Bowl, guys that had success. There is a lot of gold to be found there."

A grand jury indicted former Georgia linebacker Adam Anderson on Tuesday and charged him with rape. Anderson will be arraigned
NFL・22 DAYS AGO
97.1 The Ticket

If the draft were tomorrow , Sharpe would almost certainly be a top-10 pick. He’s widely considered one of the five to seven best players on the board.
DETROIT, MI・5 HOURS AGO
97.1 The Ticket

Isaac Paredes sure seemed to enjoy torching the Tigers [WATCH]

Making his first start for the Rays since being recalled from Triple-A earlier this week, Paredes walloped two home runs against his former team.
DETROIT, MI・2 HOURS AGO

Are Tigers forming another Big 3 in Double-A Erie?

At the very least, Olson, Hill and Bergner are making a case for promotions, especially with the Tigers dipping deep into the rotation in Toledo.
DETROIT, MI・21 HOURS AGO
97.1 The Ticket

It’s the 15th time in 16 tries the Pistons have come up empty in the lottery, and the seventh time they’ve moved down from their original position.
DETROIT, MI・23 HOURS AGO